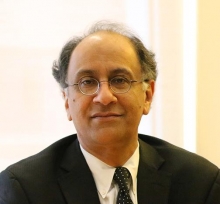 Dr. Indermit Gill is an affiliated Fellow in the Duke Center for International and Global Studies (DUCIGS).

Dr. Gill is Professor of Practice of Public Policy in the Sanford School of Public Policy at Duke University, where he was previously director of the Duke Center for International Development. He is also a Nonresident Senior Fellow in the Global Economy and Development program at the Brookings Institution. He is one of the coeditors of the Future Development Blog.

Gill worked at the World Bank from 1993 to 2016, where he held a number of leadership positions including director for development policy in the Office of the Chief Economist, chief economist for Europe and Central Asia, and staff director for the 2009 World Development Report on Economic Geography. Before that, he was economic adviser in the East Asia and Pacific Region office and lead economist for human development in Latin America and the Caribbean.

On March 11, 2021, he has been appointed as the World Bank's Vice President for the Equitable Growth, Finance and Institutions (EFI) Global Practice Group, which supports clients in building the economic, financial and institutional foundations for inclusive and sustainable growth.