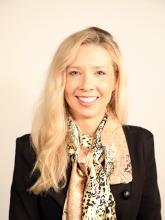 Amanda Frederick is the assistant director of the Duke University Center for International & Global Studies (DUCIGS) where she manages the daily operations of the Center.  Frederick works closely with the director to organize and support events and programs of global significance to the Duke community and beyond.  She holds a Master of Education degree in Higher Education Leadership from Florida Atlantic University (FAU) and a Bachelor of Science degree in both Psychology and Social Work from Nazareth College.

She has over a decade of professional experience in the field of international education.  Frederick joined DUCIGS after working for more than five years in the Office of International Programs at FAU.  In this role, she organized, promoted and facilitated short and long-term study abroad programs for hundreds of students from an increasingly diverse student body.  FAU ranks as the most racially, ethnically, and culturally diverse institution in Florida's State University system with more than half of its student body classified as minority or international students.

Prior to her tenure at FAU, she was the assistant director of the Center for International Education at Nazareth College.  In this role, she served as the primary point of contact for international students on short and long-term programs.  She directly provided them with intercultural experiences and personal assistance to support their academic success while they completed their studies in the United States.  Many of the international students she worked with at Nazareth College were sponsored by prestigious U.S. State Department and non-profit grants including IREX, AMIDEAST, and PLUS among others.  She also worked closely with the director to host visitors from international institutions and organize seminars and workshops.  While Frederick was a student at Nazareth College, she studied abroad in England at the University of Cumbria (formerly St. Martin's College) taking courses in social work and completing an internship.

She is deeply committed to promoting internationalization efforts at Duke University and beyond, and hopes you can become involved in all that DUCIGS has to offer.