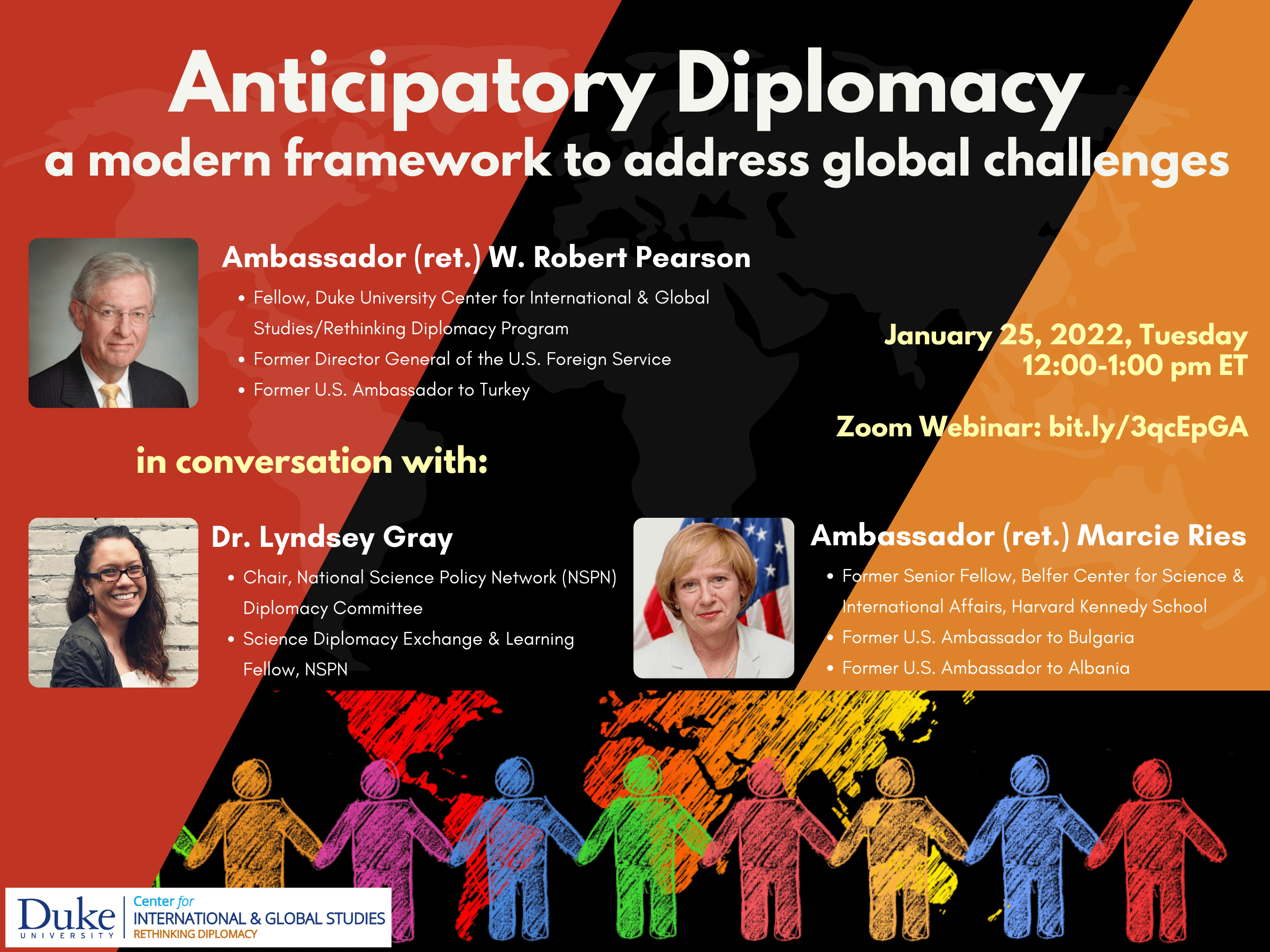 When the Duke University Center for International & Global Studies launched the Rethinking Diplomacy Program (RDP) in January 2020, we had three objectives in mind: (1) to redefine the role of diplomacy in an increasingly globalized and interdependent world which requires the constant use of specialized knowledge, (2) to create a genuine diplomacy-science partnership to tackle global challenges, and (3) to employ a model of collaborative stakeholder diplomacy multilaterally and at multiple levels to reach durable responses to crises. Since then the issues of the COVID pandemic, climate change, migration, food and water security, supply chain integrity, the restoration of sustainable economic growth, and the dynamic expansion of activity in Space have proven the point. Every major issue today has a worldwide impact, and good science and multilateral collaboration form the nexus of every sound solution.

Now it is time to introduce the next step, drawing on all that has gone before. We call this step “Anticipatory Diplomacy,” the need now to reach out to address issues before positions have hardened, where time may permit us the opportunity to find ways to move forward that are consensual and mutually beneficial. The world we see coming will bring us more not fewer challenges and opportunities. Diplomats, scientists, governments, representatives of the private sector and civil society in the United States and other regions of the world have a unique opportunity through anticipatory diplomacy in partnership with science to determine how and when to address these issues now. The deliberate projection of diplomacy to shape this future is not only growing in urgency, but it will be far less costly than to wait for the crises to come at us in emergency mode. The RDP will address this need with our perspectives on anticipatory diplomacy on January 25, 2022, with a kick-off event featuring Ambassador Bob Pearson who will lead the conversation with Ambassador Marcie Ries and Dr. Lyndsey Gray.

Dr. Lyndsey Gray, PhD MSPH, is a global health researcher, microbiologist, and infectious disease epidemiologist with a life-long commitment to addressing complex public health problems with creative problem solving, innovation, and collaborative partnerships. She has trained at the CDC, Emory University, Carnegie Mellon University, and Colorado State University while leading disease prevention studies in Latin America and West Africa. Previously, she was also a Community Health Peace Corps Volunteer and served in Peru. She is currently a Science Diplomacy Exchange and Learning Fellow through the National Science Policy Network (NSPN) and acts as the organization’s Science Diplomacy Committee Chair.

Ambassador W. Robert Pearson is a retired professional foreign service officer who served as U.S. ambassador to Turkey from 2000 to 2003. He was director general of the U.S. Foreign Service from 2003 to 2006, repositioning the American Foreign Service to meet the new challenges of the 21st century and winning two national awards for his efforts. He served from 2008 to 2014 as president of IREX, an international development NGO based in Washington, spearheading its expansion to reach more than 125 countries worldwide. He has published numerous articles, blogs and opinion pieces on diplomacy, foreign policy, Turkey, NGOs, and development. He has appeared on BBC, CNBC, NPR, Al-Jazeera, I24 TV, TNT Global and other networks. He is a frequent speaker on issues concerning Turkey, international development and the role of diplomacy in American engagement abroad.  He is currently the President of American Diplomacy Publishers and DUCIGS/Rethinking Diplomacy Program Fellow.

Ambassador Marcie B. Ries is a retired Ambassador with more than thirty-five years of diplomatic experience in Europe, the Caribbean and the Middle East.  She is a three-time Chief of Mission, serving as Head of the U.S. Mission in Kosovo (2003-2004), United States Ambassador to Albania (2004-2007) and as United States Ambassador to Bulgaria (2012-2015). She was the Senior State Department Representative on the negotiating team for the New Strategic Arms Reduction Treaty (START) between the United States and Russia, which was signed by Presidents Obama and Medvedyev in Prague in April, 2010. From 2008-2009, she was the State Department’s Principal Deputy Assistant Secretary for European and Eurasian Affairs.  She has also served as Principal Deputy Assistant Secretary in the Bureau of Arms Control and Verification (2014). From 2007-2008, during the period known as “the surge,” Ambassador Ries was Minister-Counselor for Political-Military Affairs in Baghdad, Iraq.  She also served at the Mission to the European Union and, as Political Counselor, in London.

Ambassador Ries currently serves on the Boards of the American Academy of Diplomacy and the American College of Sofia, Bulgaria and speaks frequently on leadership and management and American diplomacy.  As a Senior Advisor in the Leadership and Management School of the Foreign Service Institute, she has served as a Senior Mentor to multiple classes of Ambassadors, Deputy Chiefs of Mission and senior officers (2017-2019). From 2020-2021 she was a Senior Fellow at the Harvard Kennedy School’s Belfer Center for Science and International Affairs, where she co-authored the report entitled “A U.S. Diplomatic Service for the 21st Century.”  She is currently Co-chair of the American Diplomacy Project Phase II.