Borderlands as ‘Third Space’: Hybrid Amorphous Borders and the Imagination of Space in Asia 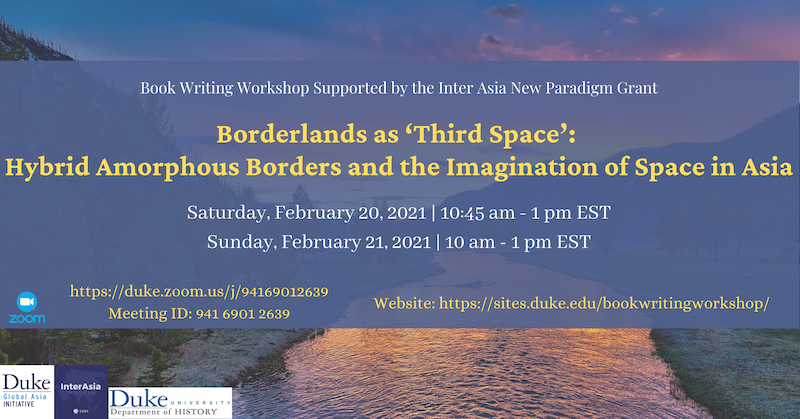 Over the last few decades, a critical borderland network has developed in part through new interrogations of terms of older analyses of boundary crossing that took for granted self-contained national units, national or ethnic belonging, and social identities, formed always in relation to place. The aim of the proposed book writing workshop is to take this critical exploration in new, transdisciplinary directions by linking cultural and environmental formations in “borderlands” that lie between maritime and terrestrial worlds. Our conversations and shared writing will explore the spatio-temporality and cultural hybridity such liminal spaces produce. More specifically, this workshop centres “ecotone” as a shared object of inquiry for participants who otherwise are specialists in a variety of periods and regions. Ecotone is a concept developed in geography and ecological studies to delimit transitional areas between two ecosystems, for example between land and sea. This book writing workshop centres the concept in humanities and social scientific inquiry, exploring ways that ecotones are tied to unique cultural formations found in liminal locales, and thus problematising the boundaries of our usual geographies of knowledge about ecology, economy and culture. Our attention will thus be focused on zones of contact and exchange tied deeply to overlooked liminal spaces defined as much by dirt, rock or water as by language, nation, or religion.

By focusing on borderlands as a transient space of mobility and contact zone the workshop aims specifically to deliberate on the cultural significance of ‘ecotone’ in understanding maritime and terrestrial borderlands not normally considered in unison, such as those that span Inner Asia, the Himalayas and the Indian Ocean world, covering nation states in South, Southeast and East Asia. “Borders” from our perspective are not simply the contours of modern nation states or topographic features on modern maps, but those zones of exchange and cultural production that exceed and rupture such familiar lines of differentiation.  Attention to ecotones foreground the porosity and instability of geographical, political and sovereign boundaries in a globalized world and suggest new analytical paradigms for the humanities and social sciences. The hybridity of the part-land, part-water borderland space for example, can be best explained through the concept of ‘third space’ (Bhabha, Soja) that proposes cultural mixing and diversity lying at the heart of liminal spaces such as deltas, lagoons, backwaters and littoral zones that forms part of an amorphous ecological and social space, where political borders are ill-defined and shift with rising tides, weather disturbances, shifting sand dunes, and changing courses of rivers. In the midst of this cultural and political interplay, in the littoral borderlands of Asia, risk and vulnerability forms part of community resilience and fragility as well as cultural innovation in relation to disasters such as cyclones, droughts, famines, floods and tsunamis.

Through comparative case studies focused on maritime shorelines, deserts, mountain ranges, and riverine courses transcending the usual territorial divisions in the study of Asia, this workshop explores how borderland spaces which are no longer national spaces need to be understood as ‘reterritorialized’ (Appadurai) and ‘transnational’ (Lionnet and Shih). In the contemporary period, such cultural and ecological spaces are bound up with global concerns about climate change, desertification, drought, sea level rise and transboundary conservation efforts. These emerging challenges of conservation, trans-border management of rivers, and customary rights to the use of water and its resources by communities test the conventional notion of borderlands as state-governed and strategic geo-political spaces.

The proposed workshop thus aims to showcase how borderlands and boundaries of nation states in Asia that lie at the transient space between land and water, deserts and mountains, plateaus and plains among other geomorphic features create a third space through licit or illicit trade, migration flows and culture contact and innovation.

The workshop will address a key question that has been central to Inter Asia studies in which nations have been artificially constructed, and regions carved out of socio-cultural milieus within the Asian continent where there are market similarities and histories of connectedness. By adopting the ‘ecotone’ concept and ‘third space’ approach we can break the model of methodological nationalism imposed by nationalist historiography where nations have been attached to the centres of state regimes that tightly control their borders. The transnational and trans-regional character of the third spaces thus becomes crucial to understand Inter Asia connections.

Therefore, the workshop aims to assemble an interdisciplinary panel of scholars with diverse regional expertise to collaboratively interrogate cultural production ‘third space’ associated with habitats that produce complex socio-cultural and ecological formations in Asia. The workshop will invite a select group of papers from scholars and SSRC fellows working on borderlands within the disciple of environmental humanities, postcolonial studies, borderland studies, subaltern studies, anthropology, sociology and history among others.

The theme of the book writing workshop will contribute to and enhance the vision of the Environmental Humanities cluster at Duke’s Global Asia Initiative. For example, among the listed aims of the centre are the interrogatory examinations: ‘How does citizenship – as the most empowering set of rights in the modern world — affect and how is it affected by the environment?’ and ‘How can and do citizens view and respond to environmental devastation through media, imaginative and experiential means?’ Our workshop will engage directly with these questions while discussing national borders and marginalised spaces as historical sites of cultural encounters. These spaces now conditioned and controlled by national, transnational and maritime laws that prohibit the free flow of communities who share abutted ecotones and shared cultural, religious and kinship ties across borderlands in Asia. The themes of sustainable citizenship and environmental justice offer a wide agenda of research in the environmental humanities of Asia. Our proposal addresses one of these neglected themes by engaging with overlapping ecological spaces as sites of both cultural and ecological transformations.

We will work closely with Professor Prasenjit Duara who has agreed to support the book writing workshop through his Centre. The workshop will create a lasting legacy for the Global Asia Initiative programme. It will involve participation of former and current SSRC fellows who have keen interest in the topic and will create a robust and enduring dialogue that will continue in the coming years. As part of the project, we have also proposed to showcase photographs from our own fieldwork in borderlands that will become part of the digital archive and a web portal that will be available for posting blogs and ethnographically-informed field research essays from academics and researchers working in marginalised and hybrid spaces.

The other participants from Duke are Professor Sucheta Mazumdar and Dr Yan Gao. Professor Mazumdar has a keen interest in the topic and has herself been Principal Investigator in a borderlands project titled ‘Borderlands/ Border Crossings: Transnational Circuits and Local Nationalism in the Making of Asia Pacific’  https://scholars.duke.edu/individual/gra112639. Her research interests span South and East Asia studies and she will support the workshop bringing in her knowledge in the field. Dr Yan Gao was a Postdoctoral Fellow based in Duke’s Global Asia Initiative and will bring her experience of working on China’s environmental issues and on historical investigation into communities who lived in the margins of an empire. Professors Duara and Mazumdar will provide the intellectual support in completing the book writing project and share valuable insights from their leadership and knowledge of Inter Asia themes. The workshop is planned as an open event where graduate students working on Inter Asia themes will be welcomed to participate and contribute to the discussion via Zoom webinar. We will also have a round table to brainstorm the themes that will be discussed over the two days, which would be integrated into proposals/ methodologies of writing the book.