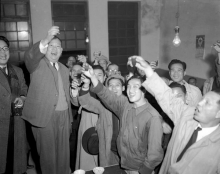 However, in 1949, these two regimes had an overlooked yet substantial amount in common in structure and state building agendas. Both were highly militarized Leninist single party states that needed to simultaneously create effective state institutions, dispatch political enemies, establish the prerequisites for the modernization of the economy, and mobilize support in areas where their connections to local society were weak to non-existent.

Juxtaposing the PRC in Sunan (Southern Jiangsu) with the ROC in Taiwan illustrates that each relied on a mix of bureaucratic and campaign modalities to implement policies deemed essential to state building - dispatching enemies of the state, and implementing land reform. However, public campaign performance pointed to key differences in their core values, self-representation, and attempts to generate legitimacy.

In Sunan, campaigns were deployed in a highly public way that erased intermediary organizations, encouraged violent "high tides," and required a mobilized public to emotionally merge with the state. Conversely, Taiwan implemented and justified campaigns in a manner that stressed law, procedure, and gradualist technocracy.

These modalities of policy implementation structured state building long after the early years of regime consolidation.

**About the speaker**
Julia C. Strauss is a Professor of Chinese Studies at SOAS University of London. Her research interests span both sides of the Taiwan Straits and are focused on state building and institution building, governance, the performative dimensions of politics, the environment, and China's "going out" policy toward the developing world, particularly with respect to Africa and Latin America.

Her publications include the co-edited volumes From the Great Wall to the New World: China and Latin American in the 21st Century (CUP, forthcoming 2012), China and Africa: Emerging Patterns in Globalization and Development (CUP 2009), and Staging Politics: Power and Performance in Asia and Africa (IB Tauris, 2007).

Single authored books include the edited volume The History of the People's Republic of China (CUP, 2006), and the monograph Strong Institutions in Weak Polities: State Building in Republican China, 1927-1940 (Clarendon, 1998).

She has written articles on subjects as wide ranging as China's contemporary forestry administration and terror in the early years of the People's Republic, with the articles "Forestry Reform and the Transformation of State Capacity in fin de siècle China" (Journal of Asian Studies, 68:4), and "Paternalist Terror: The Campaign to Suppress Counterrevolutionaries and Regime Consolidation in the People's Republic of China, 1950-53" (Comparative Studies in Society and History).

She is currently working on a monograph with the working title "Security, Land and Rice: Trajectories of Regime Consolidation in China and Taiwan, 1949-1955."