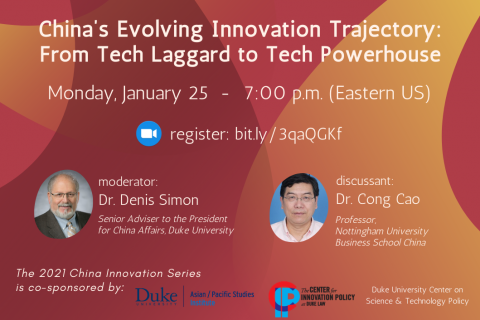 Over the last few years, impressions regarding China's technology capabilities have shifted in a dramatic fashion. As recently as 3-4 years ago, China was seen as a technological laggard, far behind the West in most major categories. The Chinese S&T system faced numerous problems regarding inefficient funding allocation, ineffective use of talent, and mismanagement of intellectual property. There seemed to be an ample cushion between China and the West insofar as the dynamics of global competition were concerned.

Today, however, perceptions about China's innovation prowess seem to have shifted, resulting in increasing concerns about the competitive threat that China poses to the West. Somehow, China's R&D performance has improved significantly and its utilization of talent has been enhanced.

Dr. Cao will discuss the underpinnings of this apparent transition and the drivers-internal and external-that have led to a fundamental re-conceptualization of where China now seems to stand vis-a-vis the US, Europe and Japan. He will analyze the impact of recent reforms and policy changes as well as the big increases in R&D funding that have occurred over the last ten years.