"Democracy and Its Challenges: A Comparative Overview" 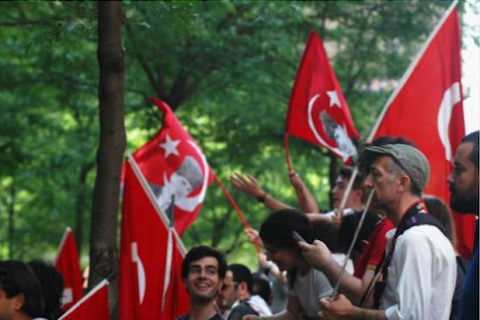 Our three speakers focused on the rise of forces around the world that increasingly question basic democratic principles. Marcelo Leiras, from Universidad de San Andrés (Buenos Aires, Argentina) talked about the Argentinian and Brazilian experiences; Laia Balcells from Georgetown University reviewed recent developments in Europe, focusing on the Spain-Catalunya conflict; and Timur Kuran from Duke University explored the rise of authoritarianism in Turkey. Pablo Beramendi from Duke University moderated the discussion.

Laia Balcells is an Associate Professor in the Government Department at Georgetown University. Between 2012 and 2017 she was an Assistant Professor of Political Science at Duke University; in 2015-16, she was Niehaus Visiting Associate Research Scholar at the Woodrow Wilson School of Public and International Affairs at Princeton University. Her research and teaching are at the intersection of comparative politics and international relations. She focuses on issues of security, peace and conflict, with a special interest in civil wars, political violence, terrorism, and nationalism and ethnic conflict. Her first book, Rivalry and Revenge: the Politics of Violence during Civil War, has been published in 2017 by Cambridge University Press (Cambridge Studies in Comparative Politics). [ https://www.laiabalcells.com ]

Marcelo Leiras is an Associate Professor and Chair in the Department of Social Sciences at Universidad de San Andrés (Argentina), where he also directs the Master’s Program in Public Administration and Policy. An Independent Researcher at the National Council for Scientific and Technical Research (Conicet-Argentina), he was the Cogut Visiting Professor at Brown University (Spring 2016) and a Postdoctoral Associate in the Program on Democracy, MacMillan Center for International and Area Studies, Yale University (Fall 2009). He has worked as a consultant for several international organizations such as the United Nations Development Program, UNICEF, International Labor Organization and the Ford Foundation. His current work explores the effects of institutionalized political competition on the stability of governments and the political involvement of social elites.  Some of his publications are Leiras, Marcelo, Guadalupe Tuñón y Agustina Giraudy. 2015. Who wants an independent court? Political competition and Supreme Court autonomy in the Argentine provinces (1984-2008). Journal of Politics 77(1) and Daniel Brinks, Marcelo Leiras y Scott Mainwaring. 2014. Reflections on uneven democracies: the legacy of Guillermo O’Donnell.Baltimore: Johns Hopkins University Press. [ https://www.udesa.edu.ar/departamento-de-ciencias-sociales/profesores/marcelo-leiras ]

Timur Kuran is Professor of Economics and Political Science, and Gorter Family Professor of Islamic Studies at Duke University. His research focuses on (1) economic, political, and social change, with emphases on institutions and preferences, and (2) the economic and political history of the Middle East, with a focus on the role of Islam. His current projects include a study of the role that the Middle East’s traditional institutions played in its poor political performance, as measured by democratization and human liberties. Among his publications are Private Truths, Public Lies: The Social Consequences of Preference Falsification (Harvard University Press), Islam and Mammon: The Economic Predicaments of Islamism (Princeton University Press), and The Long Divergence: How Islamic Law Held Back the Middle East (Princeton University Press), all translated into multiple languages. He is also the editor of the tri-lingual, ten-volume compilation, Socio-Economic Life in Seventeenth-century Istanbul: Glimpses from Court Records (İş Bank Publications). [ https://sites.duke.edu/timurkuran/ ]