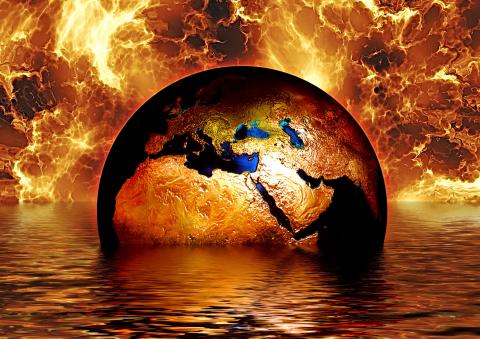 Join distinguished Indian novelist Amitav Ghosh and American writer Roy Scranton in a discussion about climate change and our imaginative failure in the face of global warming. The climate crisis asks us to imagine other forms of human existence, and fiction is the best suited of all cultural forms to help us do this. Ghosh and Scranton will be joined by Duke faculty member Jedediah Purdy who will ask our distinguished guests whether - now that human and environmental fates are inseparable - environmental politics will become more deeply democratic, or more unequal and inhumane. The event will be moderated by Ranjana Khanna, professor of English at Duke University.

Amitav Ghosh, Indian Novelist
Amitav Ghosh was born in Calcutta and grew up in India, Bangladesh and Sri Lanka. He is the author of two books of non-fiction, a collection of essays and eight novels. His most recent book is The Great Derangement: Climate Change and the Unthinkable (2016). His books have won prizes in India, Europe and Myanmar and he has been awarded honorary degrees by the Sorbonne, Paris, and by Queens College, New York. He is married to the writer Deborah Baker and divides his time between Brooklyn, Goa and Kolkata. Amitav Ghosh’s work has been translated into more than thirty languages and he has served on the Jury of the Locarno Film Festival and the Venice Film Festival. In 2007 he was awarded the Padma Shri, one of India’s highest honours, by the President of India.

Roy Scranton, American Writer
Roy Scranton is the author of We’re Doomed. Now What? (Soho Press, 2018), War Porn (Soho Press, 2016) and Learning to Die in the Anthropocene: Reflections on the End of a Civilization (City Lights, 2015). He has written for Rolling Stone, the New York Times, The Nation, Prairie Schooner, Boston Review, and elsewhere, and he co-edited What Future: The Year’s Best Ideas to Reclaim, Reanimate & Reinvent Our Future (Unnamed Press, 2017) and Fire and Forget: Short Stories from the Long War (Da Capo, 2013). He grew up in a working-class family in Oregon, dropped out of college after his freshman year, and spent his early twenties wandering the American West. In 2002, he enlisted in the US Army, serving four years, including a fourteen-month deployment to Iraq. After leaving the Army at the rank of sergeant, he completed his bachelor’s degree and earned a master’s degree at the New School for Social Research, then earned a PhD in English at Princeton. His essay “Learning How to Die in the Anthropocene” was selected for the 2015 Best American Science and Nature Writing, he was a post-doctoral research fellow at the Center for Energy and Environmental Research in the Human Sciences at Rice University, and he has been awarded a Whiting Fellowship in the Humanities and a Lannan Literary Fellowship for Fiction. He currently lives in South Bend, Indiana, with his partner and daughter, and teaches at the University of Notre Dame.

Jedediah Purdy, Robinson O. Everett Professor of Law, Duke University
Jedediah Purdy teaches constitutional, environmental, and property law and writes in all of these areas.  He also teaches legal theory and writes on issues at the intersection of law and social and political thought.
He is the author of several books, including  "After Nature" and a Trilogy on American political identity, which concluded with A Tolerable Anarchy (2009), all from Knopf.  The Meaning of Property appeared in 2010 from Yale University Press. He has published many essays in publications including The Atlantic Monthly, The New York Times Op Ed Page and Book Review, Die Zeit, and Democracy Journal, and his legal scholarship has appeared in the Yale Law Journal, University of Chicago Law Review, Duke Law Journal, Cornell Law Review, and Harvard Environmental Law Review, among others. He is a frequent contributor to publications including the New Yorker, the Nation, n+1, and Jacobin.

Purdy has co-taught with faculty from around the university, including Laura Edwards (History), Michael Hardt (Literature), and President Richard Brodhead.