Disrupting a Racial Politics of Division: Black Voices on the 1980 Mariel Boatlift. 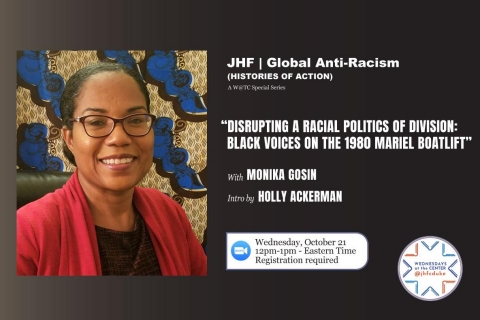 The seventh event in this series features Monika Gosin, Associate Professor of Sociology and Director of the Latin American Studies Program at the College of William and Mary.
The 1980 Mariel exodus, when 125,000 Cubans came to the United States by boatlift, underscored racial/ethnic tensions that had been brewing between African Americans and Cuban Americans in Miami for decades.

While scholarship primarily focuses on the event from the perspective of its relevance for Cubans, this talk shines a light on black voices on Mariel, to highlight the complexities involved in the fight for black rights as the definitions of "black" and of "Cuban" underwent significant shifts as the Cuban newcomers arrived.

Introductory remarks by: Holly Ackerman, Head of the International & Area Studies Department and Librarian for Latin American, Iberian and Latino Studies in the Duke Libraries.