Film: The Condor and the Eagle 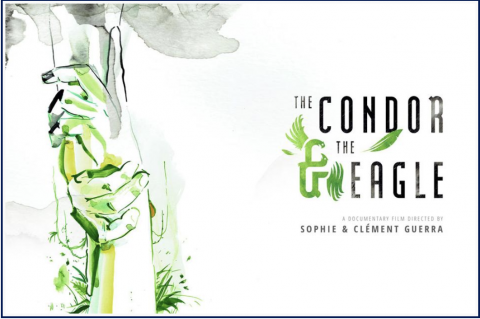 Film: The Condor and the Eagle artwork for The Condor and the EagleIcon calendarThursday, January 14, 2021Icon time6:00 pm - 8:00 pmIcon locationOnlineIcon speakerCasey Camp-Horinekcalendar download menu SPONSOR(S): Center for Latin American and Caribbean Studies (CLACS) Dir. Sophie and Clemént Guerra. 2019. 90 min. Followed by Q&A with Casey Camp-Horinek. Four Indigenous leaders embark on an extraordinary trans-continental adventure from the Canadian Boreal forests to deep into the heart of the Amazonian jungle to unite the peoples of North and South America and deepen the meaning of "Climate Justice". The Condor & The Eagle documentary offers a glimpse into a developing spiritual renaissance as the film four protagonists learn from each other's long legacy of resistance to colonialism and its extractive economy. Their path through the jungle takes them on an unexpectedly challenging and liberating journey, which will forever change their attachment to the Earth and one another. Casey Camp-Horinek, Councilwoman, and Hereditary Drumkeeper of the Womens' Scalp Dance Society of the Ponca Nation of Oklahoma is a longtime activist, environmentalist, actress, and published author. First taking up the cause of Native and Human Rights in the early 70s, it has been in the last 15 years that she began her plea for Environmental Justice for her Ponca people and people around the globe. Calling it the "toxic tour" Casey has identified and diligently worked to remediate and bring attention to the corridor of toxic environmental industry surrounding the historic lands of the Ponca people. Because of Casey's work the Ponca Nation is the first Tribe in the State of Oklahoma to pass a moratorium on fracking on tribal lands.