The Future of NATO as a Force for Global Stability: post-Turkish Coup & post-Brexit 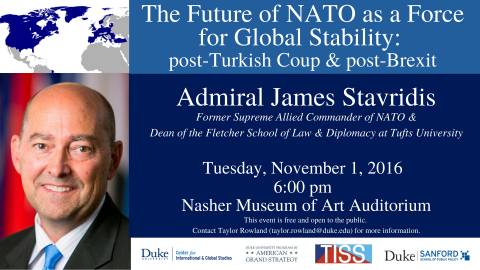 Admiral James Stavridis, former supreme allied commander of NATO and former commander of the U.S. Southern Command, will speak at Duke University on Tuesday, Nov. 1. His talk, "The Future of NATO as a Force for Global Stability: post-Turkish Coup and post-Brexit," begins at 6 p.m. in the Nasher Museum of Art Auditorium and is free and open to the public. The talk will be the first lecture in a new speaker series at Duke on the challenges of global governance funded by the Ambassador Dave and Kay Phillips Family International Lectureship. Stavridis is currently dean of the Fletcher School of Law and Diplomacy at Tufts University. During his 30 years with the United States Navy, he served as commander of the U.S. Southern Command and the U.S. European Command, and as the NATO supreme allied commander. He has written several books and articles on national security and foreign policy, and his views are often sought out by the media. Stavridis' talk is hosted by the Duke University Center for International and Global Studies, the Duke University Program in American Grand Strategy, the Sanford School of Public Policy, and the Triangle Institute for Security Studies.