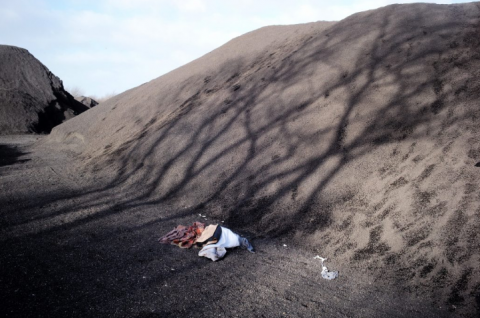 Opening reception on September 20th, 2018 at 6:15 pm - 8:00 pm. Parking available at Duke Family Medicine Center in the Pickens Building on Trent Drive. Eric Leleu is an independent documentary photographer based in Northern France. He began his career as a documentary photographer in Shanghai in 2005, where he lived and worked until 2016. For the past thirteen years, Leleu has documented China's changing urban landscapes and the way people use, transform, and play with their new and old environments. He also documented the craft of political propaganda and the many forms political communications take in China. He developed a body of personal work that blurs the boundaries between art and documentary, as well as reality and fiction. Today, he works in his home region where he is currently restoring the farm he grew up in and that he has been documenting for a long time. Leleu is currently using the buildings of his farm to create a photo gallery and a community center where farm produce will be sold. La Musette - Leleu's farm - will open in 2019. In 2017, he started to photograph the growing security infrastructure - border walls, flooded zones, watchtowers - meant to deter refugees and migrants from settling in Calais, France.