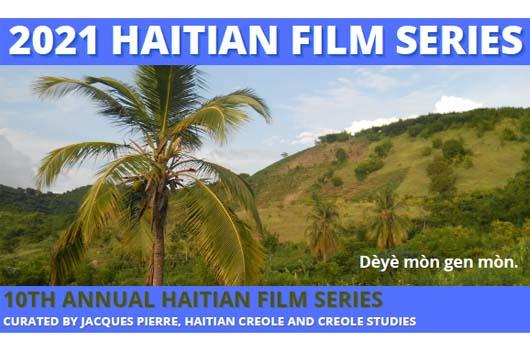 Failing Haiti
November 12, 2021 - 7:00 pm to 8:00 pm
Dir. Paul Rod. 2006. 57 min.
"Haiti, a nation forged by a slave rebellion 200 years ago, still carries the scars of its independence and abandonment. The film follows the violent events leading to the departure of President Aristide. Many participants in his ouster in February 2004 appear in the film. Failing Haiti is not only a story about the continuing tragedy of Haiti, but is also a story of America's attempt to impose western democratic values on a society steeped in profoundly distinct traditions and culture."

Undiscovered Haiti
November 19, 2021 - 7:00 pm to 8:00 pm
Host and narrator, José Andrés. 2015. 55 min.
Join world-renowned chef José Andrés on an exploration of the most unknown island in the Caribbean, Haiti. José is convinced we can change the world through the power of food, and understand a culture by exploring what, when and how its people eat. Follow José into the heart of this mysterious island, through its cuisine and discover the history and culture -- and see into the future -- of a proud and rarely understood people.
Haitian Film Series: From Haiti's Ashes
December 3, 2021 - 7:00 pm to 8:00 pm
Producer, Stephanie Collins; Director, Patrick Forbes (2011) 60 min.
The Haiti earthquake of 12 January 2010 killed thousands, toppled buildings, destroyed the capital and left the government in ruins. Now, Haiti risks crumbling to nothing. The country's future rests in the hands of one-man, Irish telecoms billionaire Denis O'Brien. He is armed with cash (he owns the island's mobile phone network), Bill Clinton's clout (he runs Clinton's Haitian interests), and the support of two unlikely allies - Lesley Voltaire, the dark Lord of Haitian politics who is running for president, and John McAslan, the outspoken Scottish architect, currently rebuilding the largest station in Europe, London's King's Cross. Can the three of them pull Haiti back from the brink?