Making Peace with Nature: A Global Endeavor We Can Achieve 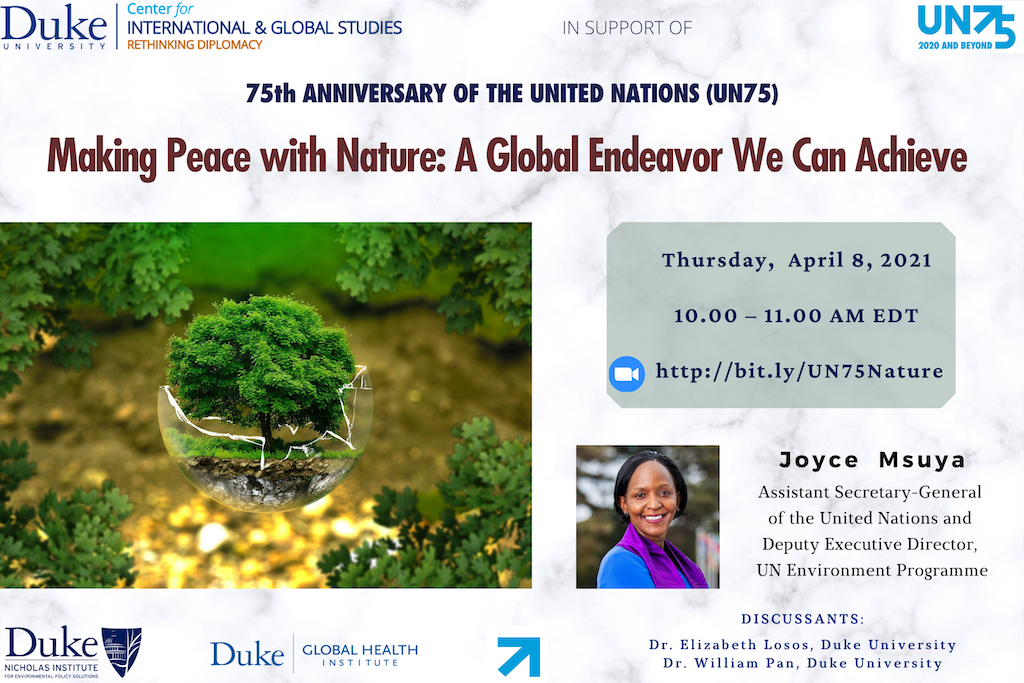 “Humanity is waging a senseless and suicidal war on nature, […] making peace with nature is the defining task of the coming decades.” UN Secretary-General António Guterres, Making Peace with Nature

Marking its 75th anniversary, in January 2020, the United Nations (UN) launched a global consultation of 1.5 million survey respondents from over 195 countries and territories with the aim of gathering information about perceptions and aspirations concerning the world we want. In the framework of the Rethinking Diplomacy Program, the Duke Center for International and Global Studies (DUCIGS) has launched a UN75 webinar series to address key issues of global concern highlighted by the global consultation (introductory event  articles and videos;  students’ reactions.)

As the second event of the Rethinking Diplomacy - UN75 series, DUCIGS in partnership with the Nicholas Institute for Environmental Policy Solutions (NIEPS) and the Duke Global Health Institute (DGHI), will welcome Ms. Joyce Msuya, Deputy Director of the UN Environment Programme (UNEP) and UN Assistant Secretary-General, for a dialog with the Duke community on the highest long-term priorities identified by the UN75 Report Climate Change and Environmental Issues and UNEP’s recently published blueprint report Making Peace with Nature. This science-based report explores the devastation created by the three interconnected planetary crises facing humanity – climate crisis, biodiversity loss and pollution – as well as, according to UN Secretary General, “a bedrock for hope.”  From transforming nature to transforming humankind’s relationship with nature, this report presents a plan to sustainably restore Earth‘s capacity to sustain human well-being.

The conversation will be moderated by Dr. William Pan and Dr. Elizabeth Losos from Duke University. During this conversation we will touch upon environmental diplomacy and discuss on the means available for the implementation of this ambitious plan, what is the role of academic and research institutions, and how this blueprint plan will affect UNEP’s global leadership role as it celebrates its 50th anniversary in 2022 and its contribution toward achieving the aspirations stressed by the UN75 global consultation, and the UN Sustainable Develop Goals by 2030.

Joyce Msuya is the Deputy Executive Director of UNEP. She was appointed by UN Secretary-General António Guterres in August 2018. Between November 2018 and June 2019, Ms. Msuya served as interim Executive Director, overseeing UNEP’s portfolio in 33 countries and administering nine Multilateral Environmental Agreements on critical environment issues. Ms. Msuya has more than 20 years of extensive experience in international development strategy, operations, knowledge management and partnerships, across Africa, Asia and Latin America.Prior to joining UNEP, Ms. Msuya served as Adviser to the World Bank’s Vice President, East Asia and Pacific Region in Washington, D.C. From 2014 to 2017, Ms. Msuya served as the inaugural World Bank Special Representative and Head of the World Bank Group Office in the Republic of Korea, where she established and developed office operations and deepened the Bank’s partnership with the country.

She has held a series of high-level positions at the World Bank Group, including the World Bank Institute’s East Asia and Pacific Regional Coordinator in China, Principal Strategy Officer at the International Finance Corporation (Manufacturing, Agribusiness and Services) and Special Adviser to Lord Nicholas Stern, World Bank Senior Vice President and Chief Economist. Ms. Msuya has worked across the public and private sectors within the World Bank Group. A microbiologist from Tanzania, Ms. Msuya began her career at the World Bank as a public health specialist for Africa in 1998. Ms. Msuya holds a Master of Science in Microbiology and Immunology from the University of Ottawa, Canada, and a Bachelor of Science in Biochemistry and Immunology from the University of Strathclyde, Scotland. She has an Executive General Management Certificate from Harvard Business School (USA) and a Public Health Certificate from Johns Hopkins University (USA).

This event is open to the public but advance registration is required.