Moving Science from a “Nice to Have” to a “Must Have” in U.S. Foreign Policy: Chatting with an Astrophysicist on the Front Lines of Transatlantic Security Policy 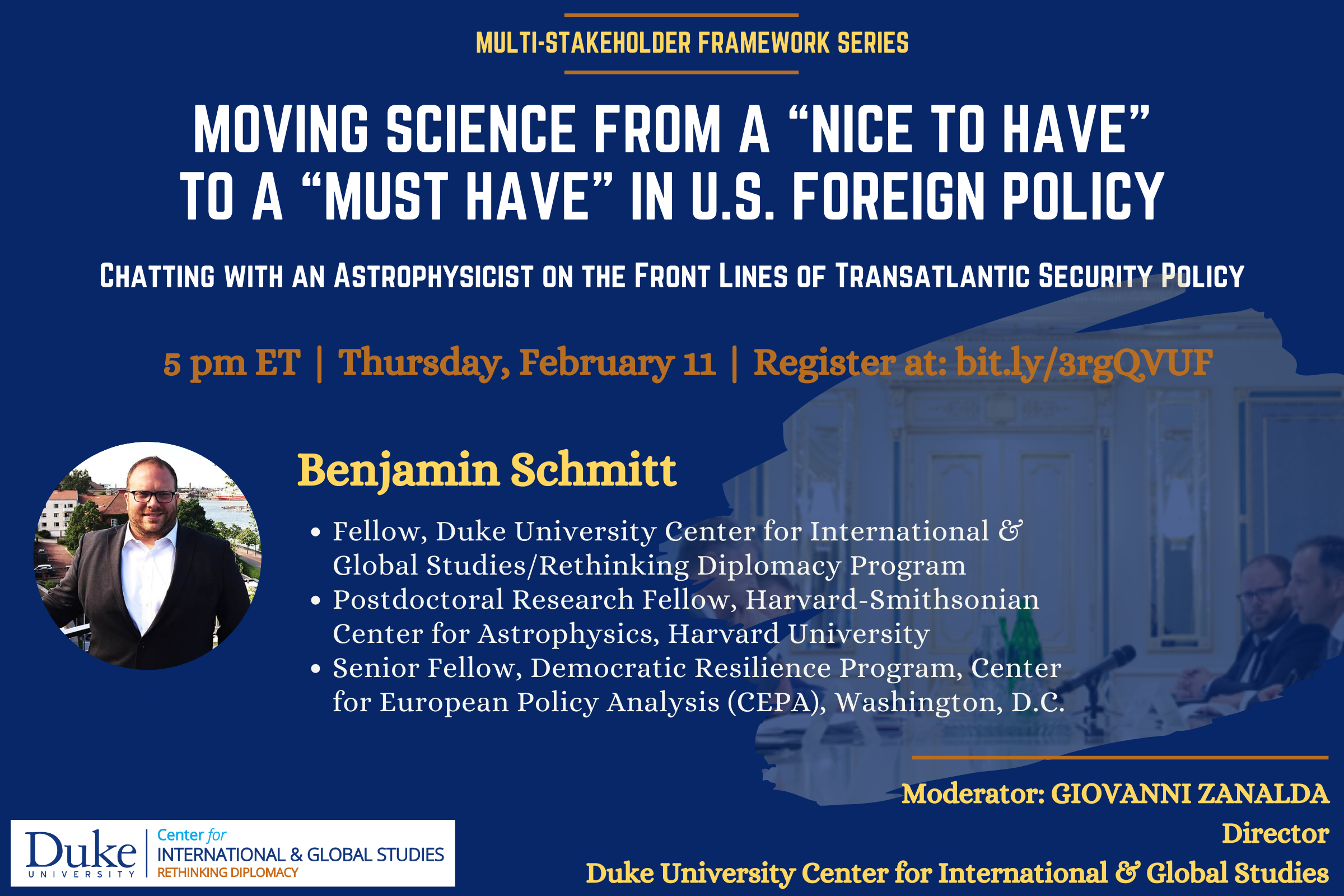 The dawn of the Biden-Harris Administration has raised Transatlantic confidence that American leadership on the world stage can be restored. From addressing political, economic, and racial divisions here at home, to leading the fight against creeping authoritarianism and other transnational threats abroad, the challenges and expectations are high.

The Biden Administration has prioritized an implementation of fact-based, science-oriented policymaking as central to its global engagement. Making good on this commitment is more pressing than ever. Traditional science policy areas such as addressing the COVID-19 pandemic and climate change are rightly a main area of focus, but science and technology analysis needs to go much further than these areas given the growing number of cross-cutting threats we face today in more “traditional” areas of U.S. diplomacy.

For example, a key area that Washington and Brussels must jointly address is the trend of authoritarian regimes weaponizing critical infrastructure investments, economic deals, and emerging technologies to challenge Western liberal democratic institutions. Given the technical basis across each of these types of investment, it is vital that we develop multidisciplinary policy responses that include pairing traditional economic and political analysis with the use of science and technology analysis to better understand the true nature of these threats and to develop countermeasures. It is more important than ever for Washington to rally a Transatlantic coalition of officials and experts of diverse background and disciplinary focus – including moving science and technology to the center of our collective foreign policy and national security process.

Please join the 1st event of a new “Multi-Stakeholder Framework Series” organized by the Duke University Center for International and Global Studies (DUCIGS) Rethinking Diplomacy program for a timely discussion on the vital need for science and technology as a central component to reshape U.S. diplomatic strategy. The virtual discussion will feature insights from DUCIGS Rethinking Diplomacy and Harvard University Fellow Dr. Benjamin L. Schmitt, and will be moderated by DUCIGS Director Dr. Giovanni Zanalda, and by the Vice-Chair of the National Science Policy Network (NSPN) Science Diplomacy Committee and Duke alumna, Dr. Amrita Banerjee, on how we can move science from a “nice to have” to a “must have” in U.S. foreign policy.

Dr. Benjamin L. Schmitt is a Postdoctoral Research Fellow and Project Development Scientist at the Harvard-Smithsonian Center for Astrophysics.  At Harvard, Benjamin focuses on the development of instrumentation and infrastructure for next-generation Antarctic experimental cosmology facilities at the South Pole.  For this work, Schmitt traveled to the Amundsen-Scott South Pole Station in Antarctica in early 2020.  From 2015-2019 Benjamin served as European Energy Security Advisor at the U.S. Department of State.  At the State Department, he advanced diplomatic engagement vital to the energy and national security interests of the Transatlantic community, with a focus on supporting Europe’s resiliency to Russian malign energy activities.  While at the State Department, Schmitt also served as the 2015 IEEE Department of State Science and Technology Policy fellow.

Benjamin is a Fellow with the Duke University Center for International and Global Studies "Rethinking Diplomacy" program focused on advancing research toward better integrating practitioners of science and technology into the senior U.S. national security and foreign policy enterprise.  He is also a Senior Fellow in the Democratic Resilience program at the Center for European Policy Analysis think tank in Washington, D.C.  Schmitt has been an invited lecturer on European national security issues, advanced energy technologies, and science and technology policy, including with the Harvard Ukrainian Research Institute, Harvard Davis Center for Russian and Eurasian Studies, Princeton University, the Stanford CISAC European Security Initiative, Duke University, the University of Pennsylvania, and National Defense University.

Benjamin publishes Transatlantic national security analysis, including with the Daily Beast, Newsweek, The Hill, the Atlantic Council, Harvard International Review, Harvard Ukrainian Research Institute, Jamestown Foundation, and Center for European Policy Analysis. Schmitt regularly provides expert transatlantic security policy commentary for television media, including regular appearances on Deutsche Welle and Voice of America TV, as well as print media interviews with the New York Times, Wall Street Journal, Foreign Policy, the Daily Beast, Voice of America, Germany’s Deutsche Welle, Handelsblatt, Der Spiegel, and Bild Zeitung, and Ukraine’s Kyiv Post.  Benjamin has received diplomatic honors including the Amicus Poloniae Award, a recognition by the Government of the Republic of Poland for outstanding efforts to promote the development of cooperation between the Republic of Poland and the United States of America.  Benjamin has also been honored as “Ukraine’s Friend of the Week” by Kyiv Post, and has received both Superior and Meritorious Honor Awards from the U.S. Department of State.