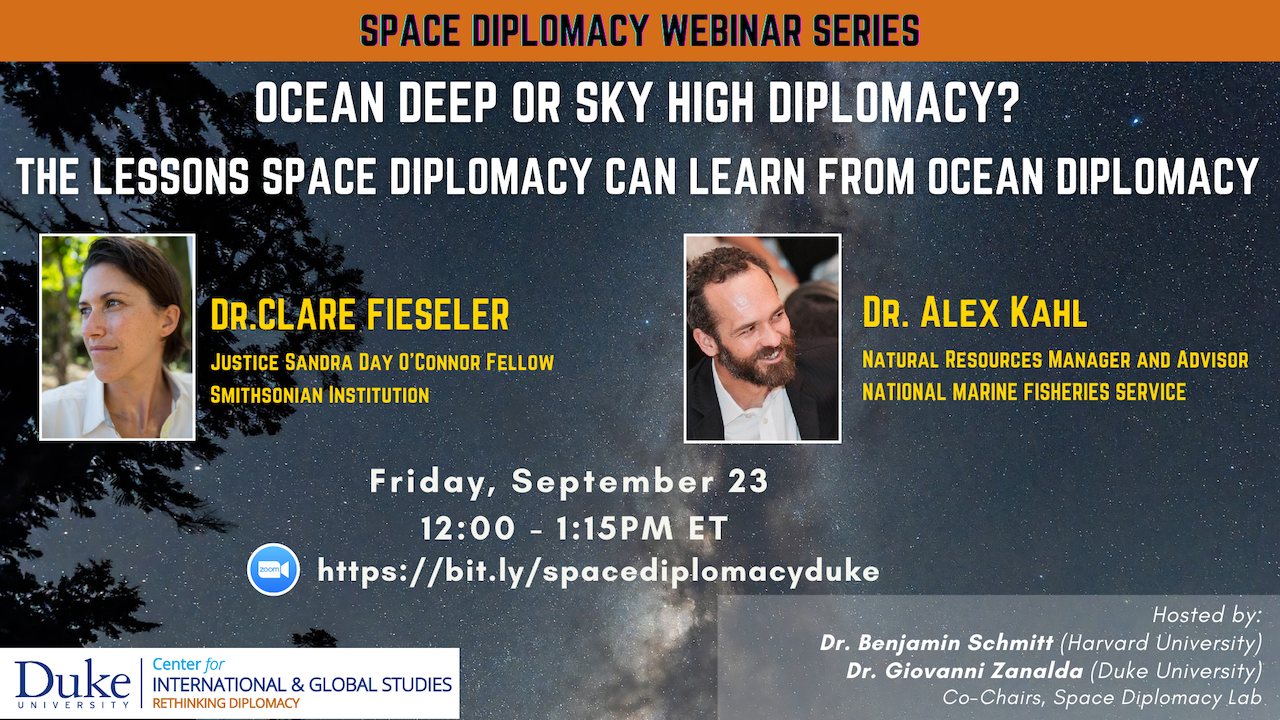 For centuries, human maritime activities have driven cultural, social, and economic contacts and exchanges between various regions of the planet, driving the development of diplomatic exchanges and cooperation between peoples the world over. This indispensable role of the oceans has continued to drive diplomatic engagement over the past century, as landmark multilateral accords such as the United Nations' Convention on the Law of the Sea, and science-based ocean diplomacy have aided the development of international agreements, with impacts on methods of cooperation across many other areas of contemporary diplomacy.

One area that can benefit from the lessons-learned over decades of evidence-based ocean diplomacy, is the emerging field of space diplomacy. The increasing focus by diplomats on the interplay between the space domain and terrestrial economic, security, and geopolitical issues should include an exploration of how the diplomatic community can benefit from models already tested and deployed within the ocean diplomacy and policy framework. Ultimately, such an approach should underpin anticipatory diplomatic models that will enable a safe and sustainable future in low earth orbit and beyond stemming from the "space renaissance" of the current decade.

Dr. Clare Fieseler is Justice Sandra Day O’Connor Fellow at the Smithsonian Institution. Her research synthesizes new and existing data to design monitoring strategies for under-studied marine mammal populations, including those exposed to past and future climate extremes. As part of her fellowship, Clare also studies how knowledge-sharing and diplomacy affect transboundary dialogue on marine conservation. Her previous research focused on conservation evidence, management, and monitoring for climate-stressed coral reef ecosystems. Clare is also a photojournalist, science writer, and former AAAS Mass Media Fellow. She recently published an article for Slate Magazine on Science Diplomacy

Clare received her master's degree from Duke University and worked as Duke’s Ocean Policy Fellow. She received her PhD in Ecology from UNC-Chapel Hill studying climate-threatened protected areas in the Caribbean.

Dr. Alex Kahl is a natural resources manager in the International Fisheries division of the NOAA Fisheries Pacific Islands Regional office. He helps implement the South Pacific Fisheries Treaty between certain Pacific Island countries and the United States, which includes vessel licensing and maintaining current documentation for U.S. vessels tuna fishing across the western and Central Pacific Ocean. He also works with the Western and Central Pacific Fisheries Commission on international fisheries in the region.

Alex received his PhD in oceanography at Rutgers University and a postdoc at the Palmer Research Station in Antarctica. Afterward, he received an American Association for the Advancement of Science Fellowship in science, technology, and policy. In 2017, he ended his tenure as a diplomat serving as a senior watch officer at the State Department. He then joined the NOAA Fisheries team at the Pacific Islands Regional Office in Hawai‘i.

This event is part of the Space Diplomacy Webinar Series organized by the Rethinking Diplomacy Program with a grant from the Josiah Charles Trent Memorial Foundation Endowment Fund.

The webinar is open to the public but registration is required.