Of Plotless Plays and Unsung Women: The Fantastical Forces Behind Maria Irene Fornes' 'Fefu and her Friends' 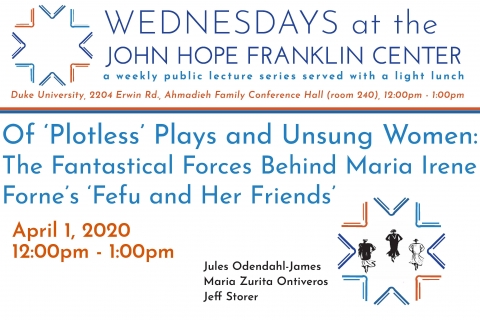 The most influential Latinx playwright/director you have likely never heard of, Maria Irene Fornes began her artistic life as a painter but her theatermaking career spanned decades, countries, and genres. Her commitment to craft was legendary and while you may not have seen or read her plays, you have most likely seen and read work by some of the American dramatists who cite her influence either via direct contact as her student at the INTAR Hispanic Playwrights in Residence Lab, which she founded and led from 1981 to 1992 (writers like Luis Alfaro, Migdala Cruz, David Henry Hwang, and Caridad Svich) or of being exposed to or taught her plays (writers like Paula Vogel, Sarah Ruhl, and Tony Kushner). This workshop/panel will offer attendees a short primer to Fornes' work and theater making philosophies through engaging them in set of Fornes' styled writing prompts (30 mins) and then letting the audience hear from members of the production team & cast of Duke's Department of Theater Studies' April production of Fornes'"promenade" play, Fefu and Her Friends, to talk about this "plotless" and ground-breaking show itself and show images of its development process, creating a house through which the audience travel during the course of the play on the stage of the Reynolds' Theater (Bryan Center).

This presentation is sponsored by the John Hope Franklin Center and Duke Theater Studies. A light lunch will be served. Parking is available in nearby Trent and Erwin parking decks.