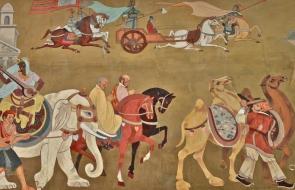 This lecture takes up calls by J.K. Gibson-Graham and others to challenge representations of capitalism as a monolithic entity, and instead, to make more visible the economic multiplicity that is all around us, but we fail to see. Many scholars already understand that Chinese state capitalism diverges from Western liberal capitalism, and even differs from the model of "East Asian Developmental State." Few have examined how pre-capitalist forms of economic practice are uneasily incorporated within Chinese state capitalist economy, where they continue to operate according to non-capitalist or even anti-capitalist principles, such as kinship ethics, human-divine exchange, divine and ritual debt-economies, communal interests, and rivalries of generosity, even while they are also penetrated by capitalism. Based on fieldwork in rural and small-town Wenzhou on the coast of southeastern China, I will examine what I call a "ritual economy" of religious and kinship expenditures that harken back to earlier pre-industrial commercial economies in imperial China. Today's "ritual economy" traces back to the Song Dynasty, when Chinese popular religions and an indigenous market economy developed in tandem. This past extends its dynamic force to the present era of religious resurgence and China's entry into global capitalism.