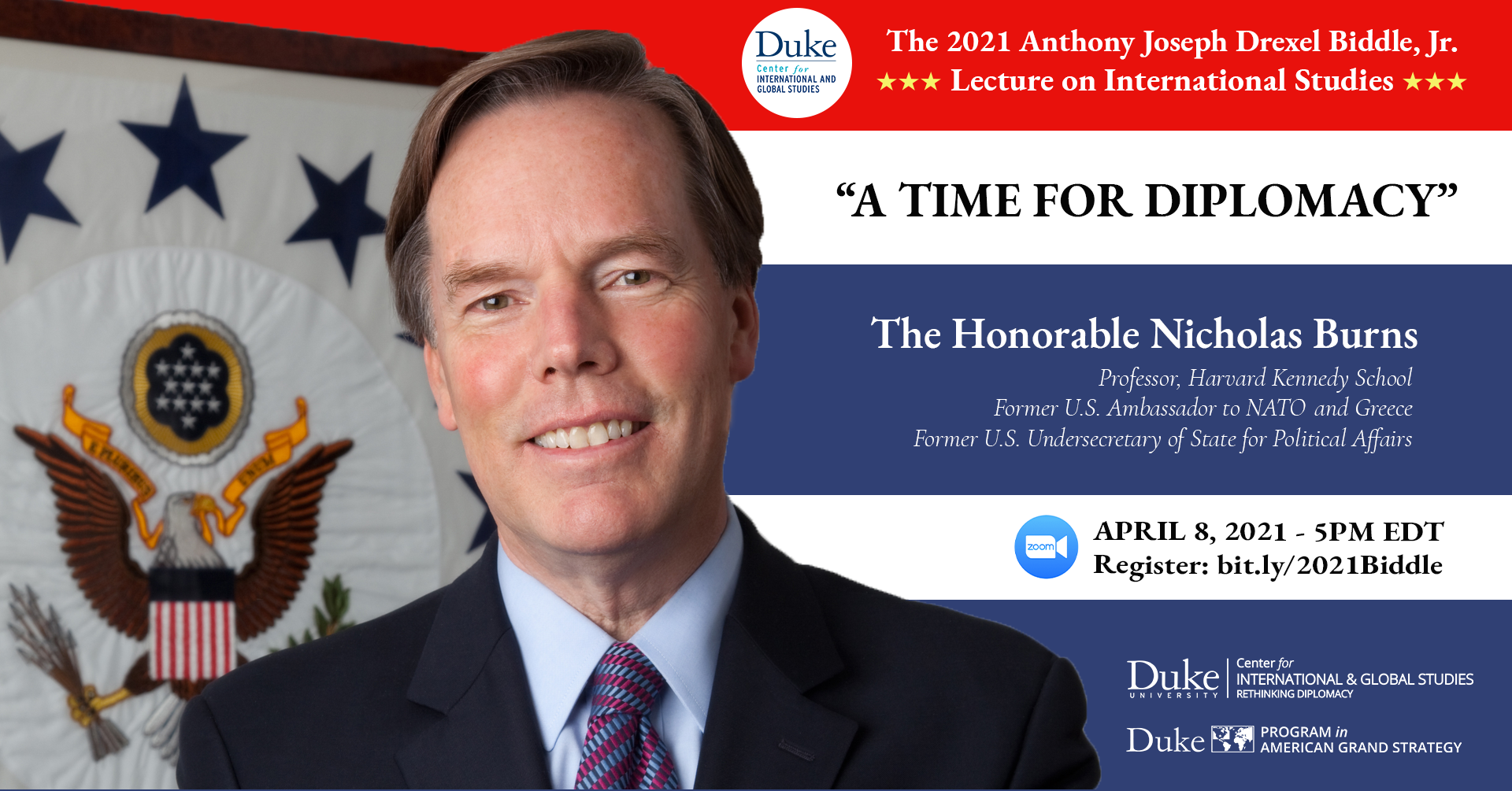 The Honorable Nicholas Burns, former Ambassador to NATO and Greece, will give the 2021 Anthony J. Drexel Biddle, Jr. Lecture on International Studies, "A Time for Diplomacy."

We are confronting the most serious crises since the Second World War: a deadly pandemic, devastating recessions, racial inequality, and white supremacy and insurrection here in the United States. We need to repair our divisions at home. We also need to re-engage with the rest of the world on multiple fronts from climate change to trade and the defense of democracy.

Ambassador Nicholas Burns has spent four decades representing the United States overseas and teaching about America's role as the indispensable power in the international arena. For much of that time, the nation leaned heavily on its unmatched military might-during the Cold War, after 9/11, and in the Afghan and Iraq wars. We have new challenges today. It is time for diplomacy to play the key role in reconstructing a more stable and better world.

The Anthony J. Drexel Biddle, Jr. Lecture on International Studies was established by Mary Duke Biddle Trent Semans and James H. Semans and their family to honor Mrs. Semans' father, who had a distinguished career as a diplomat in the service of the United States and was an original signer of The Duke Endowment. This lecture series symbolizes Duke University's continuing commitment to promoting international understanding and public service.

Duke University encourages persons with disabilities to participate in its programs and activities. If you anticipate needing any type of accommodation or have questions, please contact Amanda Frederick at af181@duke.edu in advance of your participation. Requests should be made by April 1.

Burns is Director of the Aspen Strategy Group, Senior Counselor at the Cohen Group, and serves on the Board of Directors of Entegris, Inc. Burns served in the United States government as a career Foreign Service Officer. He was Under Secretary of State for Political Affairs from 2005 to 2008; the State Department’s third-ranking official. He was U.S. Ambassador to NATO (2001-2005), Ambassador to Greece (1997-2001) and State Department Spokesman (1995-1997). He worked on the National Security Council as Senior Director for Russia, Ukraine and Eurasia Affairs; Special Assistant to President Clinton; and Director for Soviet Affairs for President George H.W. Bush. Burns served in the American Consulate General in Jerusalem where he coordinated U.S. economic assistance to the Palestinian people in the West Bank and before that, at the American embassies in Egypt and Mauritania. He was a member of Secretary of State John Kerry’s Foreign Affairs Policy Board from 2014-2017. He is a graduate of Boston College (B.A. 1978) and the Johns Hopkins School of Advanced International Studies (M.A. 1980) and earned the Certificat Pratique de Langue Francaise at the University of Paris-Sorbonne (1977).