Transcultural Freud: Psychoanalysis, Mental Health, and the Birth of a Thought Collective in the Sinophone Pacific 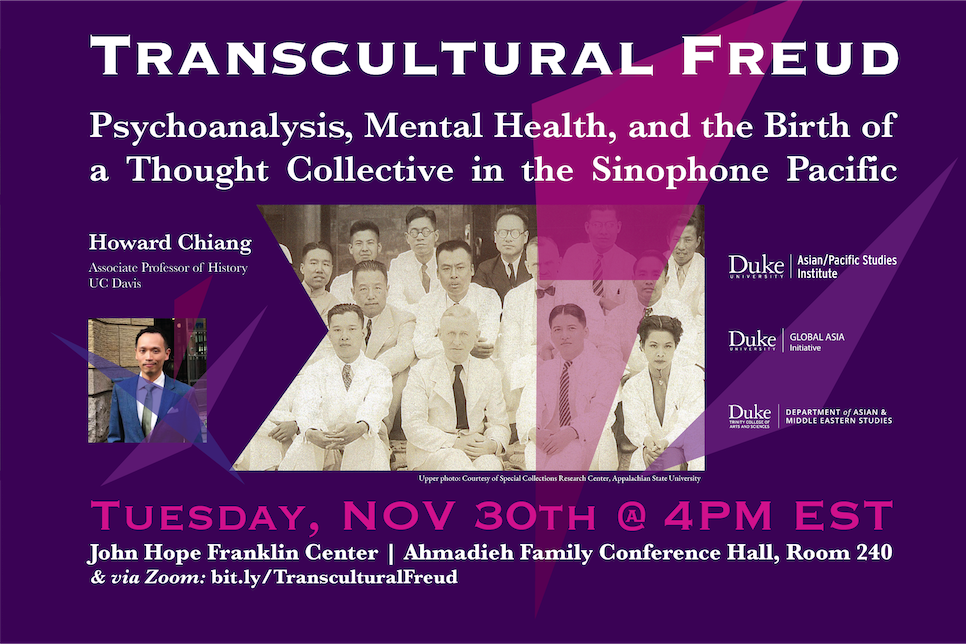 This talk explores the history of knowledge production about the cultural underpinnings of mental illness, using the intellectual biography of the Chinese psychoanalyst Bingham Dai (1899-1996) as a focal point. Dr. Howard Chiang situates the complex interaction between psychodynamic science and Chinese culture in a transpacific milieu-from the era of medical modernization to the rise of international mental health. He traces the crystallization of a new style of science, transcultural reasoning, over time. This epistemic style debunks the assumption that Western biomedical categories are universally applicable, treats thinking across geographical and disciplinary borders as the basis of evidence, generates new categories and parameters of scientific inquiry, and repositions its practitioners from the margin to the center of scholarly discourses. Whereas the engagement of Western psychoanalysts with "China" is typically understood to have peaked in the Cold War era, this talk will unveil a longer historical trajectory in which such a thought collective has been nested.

Howard Chiang is Associate Professor of History at the University of California, Davis and the Founding Chair of the Society of Sinophone Studies. He is the author of Transtopia in the Sinophone Pacific (Columbia University Press, 2021) and After Eunuchs: Science, Medicine, and the Transformation of Sex in Modern China (Columbia University Press, 2018), which received the International Convention of Asia Scholars Humanities Book Prize and the Bullough Book Award from the Society for the Scientific Study of Sexuality. He served as the Editor-in-Chief of The Global Encyclopedia of LGBTQ History (Gale, 2019), which was awarded the 2020 Dartmouth Medal for Excellence in Reference by the American Library Association. He coedits the "Global Queer Asias" book series published by the University of Michigan Press.

This event will be held in-person at the John Hope Franklin Center | Ahmadieh Family Conference Hall, Room 240 and available live via Zoom: https://duke.zoom.us/meeting/register/tJUrdOGuqTwoGNYItveXGOXXW_tora3RMzJP