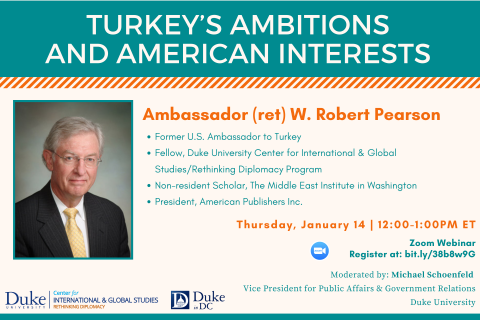 Under President Recep Tayyip Erdogan, Turkey is a growing power with ambitions that are challenging international order regionally and globally.   What are those aspirations, what are the difficulties for Turkey, and what are the options for the United States? Ambassador W. Robert Pearson, former U.S. ambassador to Turkey, will present analysis and thoughts on this critical relationship at this first DUCIGS/Rethinking Diplomacy Program webinar of 2021. Michael Schoenfeld (Vice President for Public Affairs & Government Relations at Duke University) will moderate the discussion.

Ambassador (ret) W. Robert Pearson is a Fellow at Duke University’s Center for International and Global Studies Rethinking Diplomacy Program, a non-resident Scholar at The Middle East Institute in Washington, President of American Publishers Inc., a digital journal on American foreign policy published in cooperation with the University of North Carolina, and a partner at Spectrum Group, a Washington consulting firm. He served from 2008 to 2014 as president of IREX, an international humanitarian development NGO based in Washington focused on education, civil society development and independent media, spearheading its expansion to 125 countries worldwide. He is a frequent speaker on American diplomacy and foreign affairs,Turkey and its place in the world, the Middle East, and international development.  He has published numerous articles and opinion pieces and has appeared on BBC, CNBC, MSNBC, NPR, Voice of America, Al-Jazeera, I24 TV, and TNT Global among other networks.

This event is co-sponsored by the DUCIGS/Rethinking Diplomacy Program and Duke in DC.

This event is open to the public but advance registration is required. Please click HERE to register.