Turmoil in the Americas: Are Protests the "New Normal" in the Region? 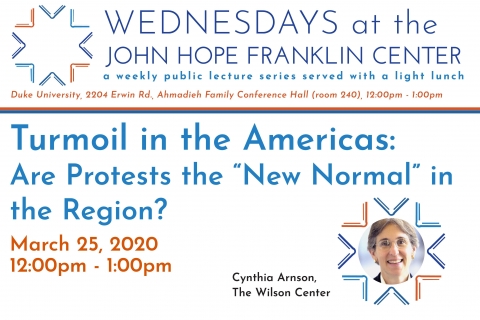 Cynthia J. Arnson, Director of the Wilson Center's Latin American Program, is a widely-recognized expert on Latin American politics, political economy, and international relations, including U.S. policy in the Western Hemisphere. She is quoted frequently in major U.S. and Latin American media and has testified on numerous occasions before committees of the U.S. Congress. She is the author or editor of several books on conflict resolution, democratization, populism, and U.S. Central America policy, among others. Arnson has also held positions at Human Rights Watch and in academia. Arnson serves on the advisory boards of Foreign Affairs Latinoamérica and the Salvadoran Foundation for Economic and Social Development(FUSADES). As a foreign policy aide in the House of Representatives during the Carter and Reagan administrations, she participated in the national debates over U.S. policy and human rights in Central and South America. This presentation is sponsored by the John Hope Franklin Center and the Center for Latin American and Caribbean Studies. A light lunch will be served. Parking is available in nearby Trent Rd. and Erwin Rd. parking decks. The series provides 1-hour parking vouchers to guests.