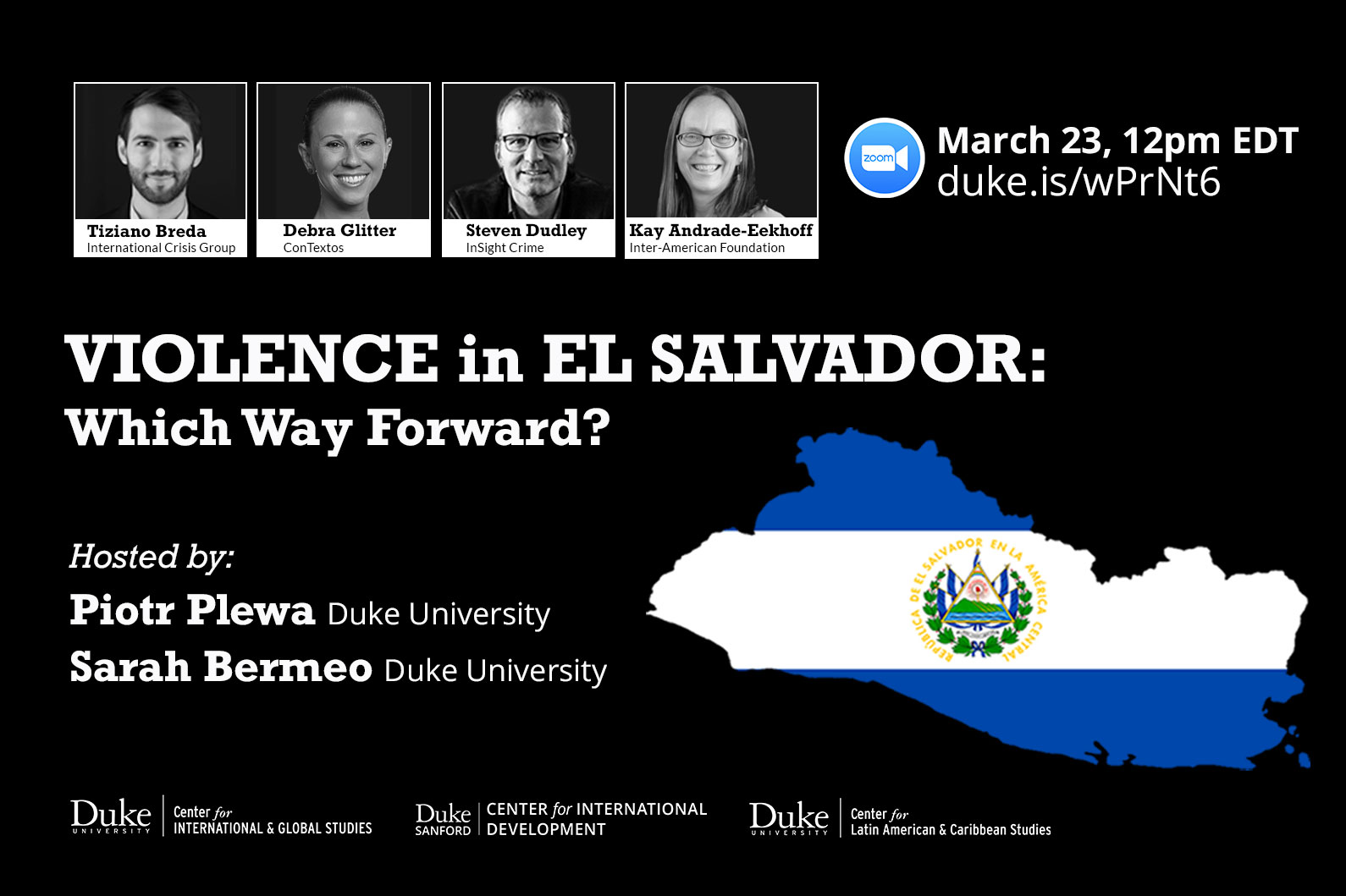 Mired in violence inflicted by gangs and security forces alike, El Salvador tops the list of most dangerous countries outside of an active war zone.

It was not until the end of the twelve year-long civil war that the U.S. afforded Salvadorian migrants partial protection, thereby delaying successful integration of what became U.S.’s second largest Latin American diaspora.

How did a group of disenfranchised migrant youth turn into America’s most notorious gang—the so called MS-13 ? What prevented Salvadorian and U.S. authorities from restoring order? What are the ways forward?

Tiziano Breda took on the role of Analyst for Central America in January 2019. He conducts extensive field research, provides analysis, and proposes policy initiatives to relevant governmental, international and non-governmental actors to address key issues linked to violent crime, migration and political instability in the Central American region. Tiziano joined Crisis Group in April 2017, first as an intern and then as EU Advocacy & Research Assistant in the Brussels office, and as Research Assistant in the Bogotá office. He previously wrote for different online magazines, mainly regarding European and Latin American affairs. He holds a Bachelor of Arts in Sociology from the University of Padua and a Master's Degree in International Relations from the University of Bolonia, Forlì. He has also specialized in peace studies and conflict resolution by taking courses at the Johns Hopkins University (SAIS) and the Universidad Nacional de Colombia.

Steven Dudley is the co-founder and co-director of InSight Crime, a think tank focused on organized crime in the Americas, and a senior fellow at American University’s Center for Latin American and Latino Studies in Washington, DC. In September, Dudley published his second book, MS-13: The Making of America’s Most Notorious Gang (HarperCollins), which in 2019 won the Lukas Prize for work-in-progress. Dudley combines reporting from the ground with deep analysis. He has written for newspapers, magazines and think tanks. He has reported for weeklies and some of the largest news outlets in the world. And he has worked on government reports that inform future priority areas and country reports for asylum lawyers. Dudley is the former Bureau Chief of the Miami Herald in the Andean Region and the author of Walking Ghosts: Murder and Guerrilla Politics in Colombia (Routledge 2004). Dudley has also reported from Haiti, Brazil, Nicaragua, Cuba and Miami for National Public Radio and the Washington Post, among others. Dudley has a BA in Latin American History from Cornell University and an MA in Latin American Studies from the University of Texas at Austin. He did the Knight Fellowship at Stanford University in 2007-2008, and is a member of the International Consortium of Investigative Journalists. In 2012 to 2013, he was a visiting fellow at the Woodrow Wilson International Center for Scholars in Washington, DC where he currently resides.

Kay Andrade-Eekhoff is a Foundation Representative for the Inter-American Foundation.  Prior to this she served as the Technical Advisor on Youth Employability for Catholic Relief Services (CRS) in Latin America and the Caribbean providing support and guidance to deepen and expand program quality through interventions related to leadership, service and employability for opportunity youth, leading the implementation and scaling strategy for Jóvenes Constructores. She has been a professor in the Department of Political Science and Sociology at the Universidad Centro Americana ‘José Simeón Cañas’ (UCA) in El Salvador and worked for 8 years as a senior researcher with the Facultad Latino Americana de Ciencias Sociales (FLASCO) in Central America, involved in policy related research on topics ranging from labor markets, poverty, social exclusion, violence, governance and international migration.  She has served as a member of the Board of the International Network on Migration and Development and advisor to the National Alliance of Latin American and Caribbean Communities (NALACC).   She worked as a consultant for the United Nations Development Program and the Pan American Development Foundation and collaborates extensively with grassroots and civil society organizations linked to issues related to youth violence, employability, migration and development in the U.S. and Central America. She holds a master’s degree in Urban Planning from UCLA, and has lived in El Salvador from 1994 to 2021.

Debra L. Gittler is the Founder and Executive Director of ConTextos, a transnational organization that focuses on the power of education personal narrative to promote healing and reflection, build bridges and complicate prevailing assumptions about violence, trauma and community. In 2011, she launched ConTextos with limited funding and an ambitious goal to transform the learning experiences for young people in El Salvador’s most ignored and under-resourced communities. Since then, she has expanded ConTextos' reach throughout Central America and into the USA. Under her leadership, ConTextos has carved a unique niche at the intersection of education and justice reform to lift up the voices and support the social-emotional learning of young and young-ish people living in some of the most violent and trauma-prone contexts of the Americas in order to transform how we practice and think about moving toward more equitable, healthier, thriving communities. In the last ten years, ConTextos has worked with so many young people (and the adults who love and serve them) at the heart of El Salvador's generational violence and trauma. They meet and work with these individuals in schools, communities, juvenile detention, gang and civilian prisons and deportation sites.