Authors, Others Discuss Failure to Act on Climate Change

This article was published in Duke Today (LINK). 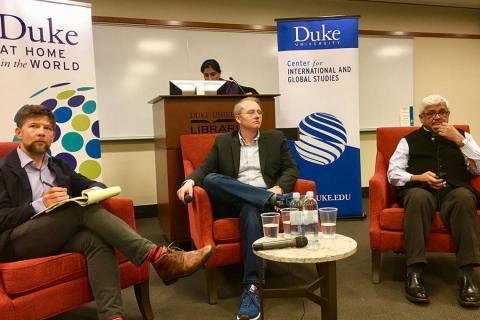 In a recent discussion at Duke, authors Amitav Ghosh and Roy Scranton discussed climate change and our imaginative failure in the face of global warming. Law professor Jedediah Purdy led the discussion, titled “Denatured Planet, Deranged Worlds: Imagining the Anthropocene.” Community members, Duke students and faculty gathered as the panelists further discussed what global warming reveals about us, about society, and what, if anything, can now be done to prevent the impending crisis.

“There’s this narrative that has sort of evolved, that the affluent will be safe and the poor are doomed. And I think this is a terrible narrative in every possible way,” Amitav Ghosh said. “Look, the United States is the richest country in the world, yet we could say the country that has been the worst affected by climate change in 2017-18 is the United States. Just put together a list of the droughts, the wildfires, the hurricanes, the tornados. So, I don’t think this narrative is either true or accurate.”

Ghosh, along with other panelists, cautioned that the real threat to our climate comes from the East, where billions of people wish to rise out of poverty and have the same standard of living. He also emphasized that the entire  world needs to be committed to mitigating global warming, as this is a disaster which knows no borders.

Yet climate change will not only bring natural disasters.  “All those natural disasters are certainly terrifying and horrific in their own aspects,” Roy Scranton stated, “but what I find most disturbing about the future and hardest to confront and think about, is the political choices people are making right now, and are going to be making, in response to these disasters in the sense of insecurity and the sense of scarcity.”
Scranton fears the authoritarian regimes which he believes are the inevitable political side effect of global warming.

The conversation focused on topics related to the potential demise of humans and how different cultures view this apocalyptic narrative and the idea of death.

While the general topics explored by the panel proposed a rather bleak future with very little potential for improvement, Scranton ended the event by speaking about the potential effectiveness of “small groups of like-minded people, working together without regard to short term success but with an eye toward long term goals and to working within institutions and building new institutions.”

This event was hosted by the Duke Center for International and Global Studies (DUCIGS), the Duke Global Asia Initiative (GAI), and the Duke Office of Global Affairs, and was part of the Duke at Home in the World Series, sponsored by the von der Heyden Fellows Fund established by Karl (’62) and Mary Ellen von der Heyden.