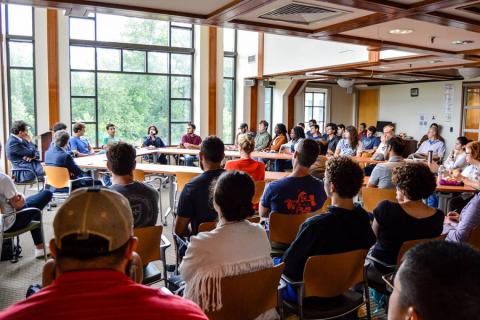 This past weekend, conservative nationalist Jair Bolsonaro prevailed in the first round of voting in Brazil’s 2018 presidential election, one month after an assassination attempt nearly ended his life.  His opponent in the Oct. 28 runoff, Fernando Haddad, ascended to the top of his party’s ticket only a month ago—when the jailed Luiz Inácio Lula da Silva was ruled ineligible to run.

Such is the confusing and fascinating nature of this year’s Brazilian presidential contest.  On Sept. 27, a panel of experts -- primarily Brazilian students from across the university – gave their perspectives on a polarizing election in the largest South American country.

The conversation delved into Brazil’s political chasm, with “people fighting over Facebook with their friends” like never before, according to Pereira.  Rangel agreed, conveying surprise that “the people I’ve known all my life have become more ideological disparate.”

Nunes added that “getting more passionate about politics is supposed to be a good thing.  But this is a very polarizing election.  I haven’t seen anything like this before in Brazil.”

Panelists said this election will greatly influence Brazil’s future, and likely not for the better.  “Whoever wins, we’re going to lose,” Miranda said.

Costa reflected on an aspect of Brazilian politics that hit close to home for the more than 50 students—almost entirely American—in the room.  He described how the two frontrunners, Bolsonaro and Haddad, received more television coverage, which had the dual effect of driving up their support while also amplifying political polarization.  This has made it harder for moderates to garner support—not unlike what is seen in U.S. politics, where presidential aspirants must play to their base to get nominated.

Panelists also spoke about Brazil’s compulsory voting laws: all citizens 18 and older must cast a vote or face fines.  Generally, roughly three-quarters of the nation’s population votes.  That’s not necessarily a good thing, Nunes said. “It’s easy to manipulate people to vote a certain way,” Nunes said. “I’m not claiming I’m more capable than others in ignoring efforts to manipulate me.  But it raises the question of whether compulsory voting is good or bad for the country.”

This event was the third in Duke’s “Global Political Perspectives” (GPP) series — a program conceived by POLIS: Duke’s Center for Political Leadership, Innovation, and Service and International House (iHouse).  DUCIGS, Duke’s Office of Global Affairs, the Sanford School of Public Policy, and the Duke-Sanford Latin American and Caribbean Group cosponsored the discussion.

A video recording of the event can be found here: https://www.youtube.com/watch?v=yBetG-Qu9U8

The next GPP talk – again featuring foreign students -- will take place in the spring and will focus on the presidential election in India.