The Climate Stakes of International Infrastructure Projects Are Very High 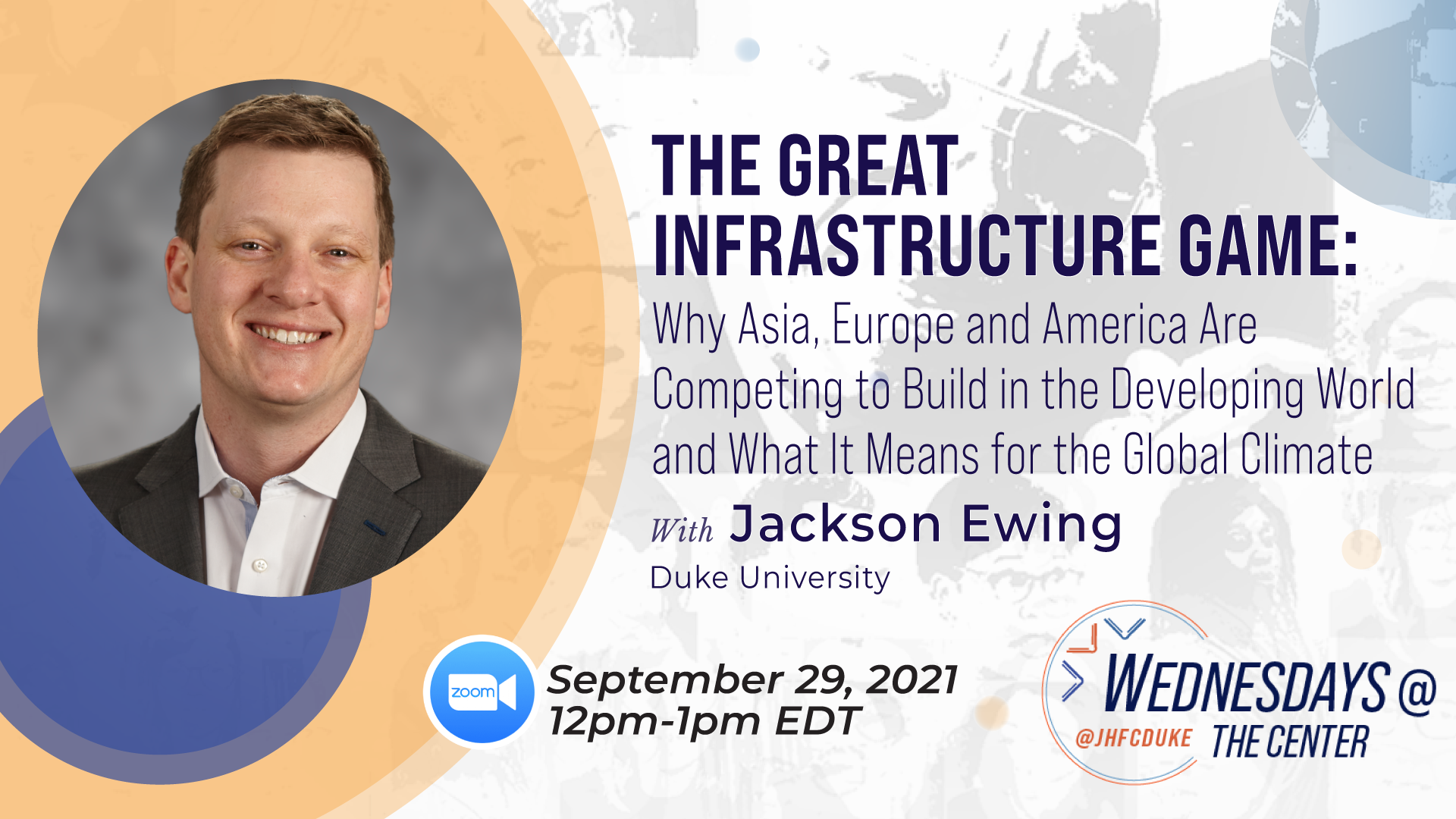 Jackson Ewing, Senior Fellow at the Duke University Nicholas Institute for Environmental Policy Solutions, adjunct Associate Professor at the Sanford School of Public Policy, and DKU iMEP Faculty Lead, spoke on the environmental implications of the growing international competition to build infrastructure in developing countries during a virtual Wednesdays at the Center presentation. DUCIGS Director, Giovanni Zanalda, introduced and moderated the event.

At the beginning of his presentation, titled, “The Great Infrastructure Game: Why Asia, Europe and America are Competing to Build in the Developing World and What It Means for the Global Climate,” Ewing discussed China’s recent pledge to step away from funding fossil fuel projects overseas, which President Xi announced at the UN General Assembly meeting in New York City on September 21. He then explored the diplomatic and geopolitical drivers of infrastructure investment, the key characteristics of investments by major players including the United States, European Union, and East Asian countries and the climate stakes of infrastructure development outcomes.

After years of investing heavily in coal-powered infrastructure projects abroad, China had become one of the largest funders of greenhouse gas emissions and conventional pollution in the world. As a result, “China began to face pushback both from some groups, institutions, and countries themselves about its prioritization of coal investment in the energy sector and its wider approach to environmental and climate impact assessments in transportation projects and other infrastructure development,” Ewing said.

The response from China has been a gradual shift towards greener projects abroad, although Ewing noted that the changes implemented by China have been, “justifiably criticized as lacking teeth.” As opposed to implementing an overarching guiding policy for its international infrastructure investments, China has merely moved to meet the environmental requirements of the host country.

At the same time of China’s shift away from coal, the United States, the European Union, and the G7 are seeking to offer competitive infrastructure development funding that is standards-driven, prioritizing good governance, climate friendly standards, and strong strategic partnerships.

Ewing noted that the climate stakes for the direction in which international infrastructure funding moves are very high. “The energy and infrastructure trajectories of countries that need vastly improved access to power services, transportation, and the like…have an enormously high emissions growth potential. The systems that are ultimately deployed to meet those needs will be instrumental in whether or not we find ourselves on a high temperature trajectory,” Ewing explained.

Ewing believes that the US/EU standards-driven approach’s ability to compete with China’s outbound investments will depend on improving their nimbleness, their perceived attractiveness, China’s project performance, and shifts in priority and preference by host countries.

This event was sponsored by the John Hope Franklin Center (JHFC) and the Duke University Center for International and Global Studies (DUCIGS).