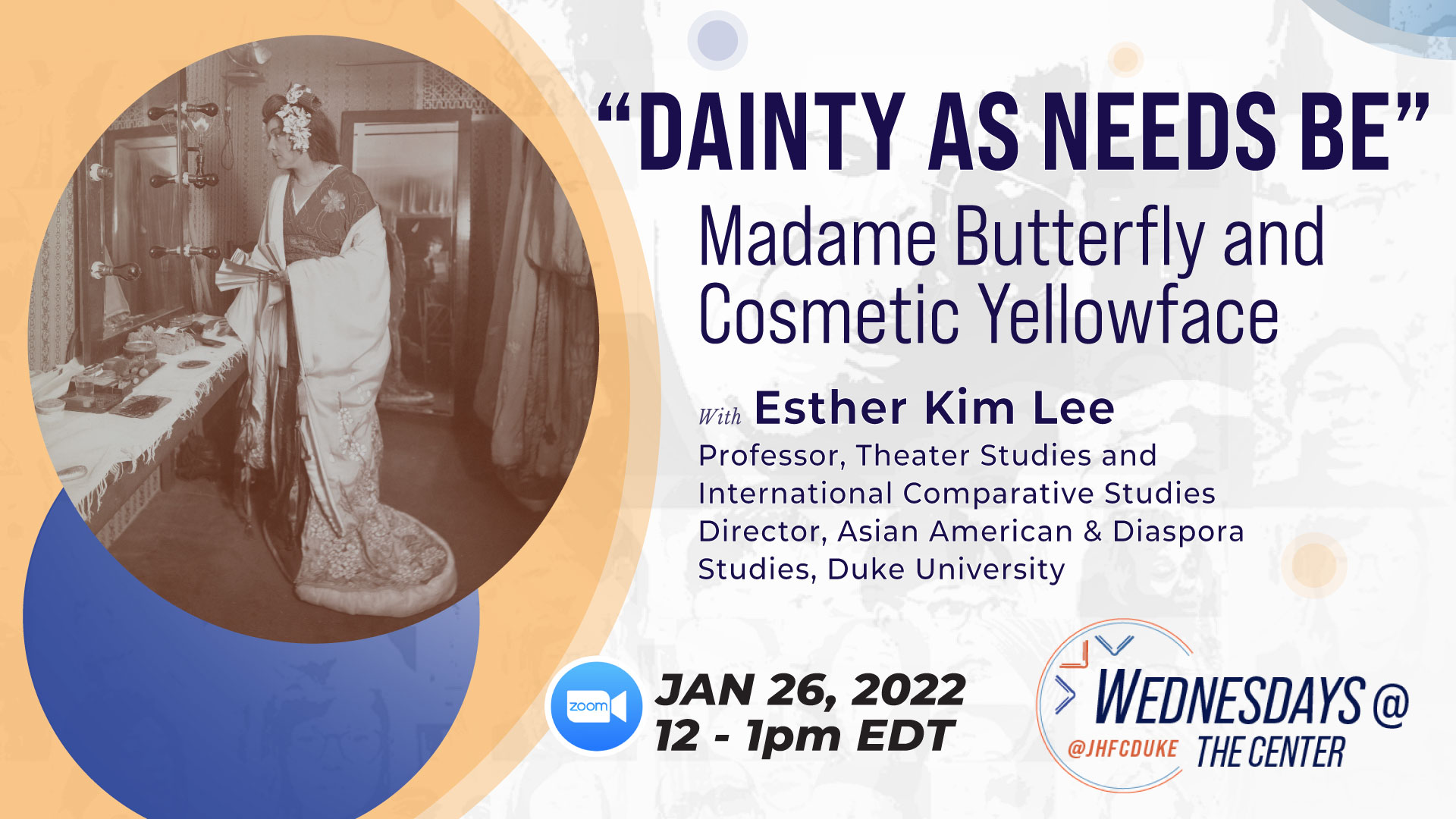 In this first Wednesdays at the Center talk of the Spring 2022 term, noted theater scholar Esther Kim Lee (Theater Studies, Duke University) shared some of her recent research on the use of “cosmetic yellowface” in theatrical productions such as Madame Butterfly and “The Darling of the Gods.”

Discussion of yellowface in media and other academic research typically focuses on the phenomenon that Lee describes as “clownish yellowface,” the highly stereotypical and often negative portrayal of East Asian characters by white actors using makeup, prosthetics, and costumes. Examples include Mickey Rooney as Mr. Yuniyoshi or Boris Karloff playing Dr. Fu Manchu. Clownish yellowface is an important aspect of the larger conversation that Prof. Lee explores more extensively in her forthcoming book, “Made-Up Asians: Yellowface During the Exclusion Era,” as well as in her upcoming talk for the Franklin Humanities Institute on February 4 (https://fhi.duke.edu/events/made-asians-yellowface-during-exclusion-era).

This talk, however, focused on the parallel concept of “cosmetic yellowface,” tracing its history to the first production of Madame Butterfly in 1900 and examining how these performances impacted the representation of Asian women on the stage and, later, on the screen.

Prof. Lee coined this particular term, “cosmetic yellowface,” to describe the ways in which performers enhance their appearance while racially impersonating East Asian characters through the use of makeup, clothing, accessories, and physical gestures. The purpose is not a negative portrayal of East Asian characters; instead, the caricature embedded in cosmetic yellowface is intended to make the performers appear to be more attractive in an “exotic” way, simultaneously highlighting their ability and effectiveness as actors.

As Prof. Lee put it, “the tragic Asian character type was favored by many white actresses who wanted to demonstrate their acting versatility. They changed their faces with makeup to look sufficiently ‘Asian’ or ‘dainty enough’ while maintaining their white beauty.” Ultimately, she noted, in the eyes of the theater world and audience, “the tragedy of Asian women could be a means of showcasing what the white actress could do,” enabling them to advance their careers in a competitive environment.

The first woman to play Cho-Cho San, the titular character in Madame Butterfly, was Blanche Bates. In addition to the makeup, kimono, fans, parasols, and other stage props used during the actual production, a large part of Bates’ preparation for the role was studying the physical gestures of Sada Yacco, a Japanese geisha who was visiting New York on a theatrical tour.

While many actors go to great lengths to understand and emulate a character’s traits and mannerisms in preparation for a role, great care must be taken when crossing cultural lines. In the early 20th century, Prof. Lee pointed out, the producers were far more interested in exaggerated stereotypes. One theater critic noted that, despite Bates’ height and athleticism, her portrayal of Cho-Cho San was “as dainty as can be,” echoing a review of Yacco’s appearance as “a pretty, dainty little creature,” the shallow epitome of what was presumed to be Japanese womanhood.

What made cosmetic yellowface both egregious and insidious was the legal exclusion of individuals, particularly women, of East Asian origin. Prof. Lee noted the double standard that celebrated traveling performers such as Yacco while preventing them from immigrating and naturalizing.

Although all individuals born in the U.S. were automatically citizens, a series of laws, including the Page Act of 1875 and the 1891 and 1903 Immigration Acts, barred “Oriental” women from immigrating for “lewd or immoral purposes,” presupposing that these women were prostitutes or second wives. The women themselves bore the burden of proof to show that they were “morally upright.”

As Prof. Lee stated, “while real Japanese women were excluded and suspected of being sexually immoral, fictional Asian women characters are portrayed as exotically sexual and were performed by some of the most popular and respected actresses of the era. White actresses playing sexualized women in yellowface are admired on stage and screen, but real Asian women were excluded from immigration and citizenship because of the potential danger their sexuality posed to society.”

This exclusion of Asian and Asian American women as well as actresses was deliberate and has implications for even modern times. As an example, Lee highlighted the way in which Anna May Wong, an American-born actress of Chinese heritage, was overlooked by casting directors and producers for the lead character of O-Lan in the 1937 film The Good Earth. Instead, German-born actress Luise Rainer was cast and ultimately won an Academy Award for Best Actress for her portrayal.

“The real tragedy of Asian women in the U.S.,” Prof. Lee observed near the end of her presentation, “was downplayed or ignored as the romanticized deaths of fictional Asian women became the primary trope used to represent Asian womanhood. But the more lasting legacy of cosmetic yellowface was how it operated to exclude Asian and Asian American actresses from being cast in principal roles in theater and film.”

The talk was moderated by by Eileen Cheng-yin Chow, Associate Professor of the Practice in Chinese and Japanese Cultural Studies at Duke University, and one of the founding directors of Story Lab at Duke.

Wednesdays at the Center is a series of Duke University’s John Hope Franklin Center and the Duke Center for International and Global Studies (DUCIGS.)

This event was co-sponsored by the Asian Pacific Studies Institute at Duke.