A Conversation with Mexico Ambassador to the U.S., Martha Bárcena Coqui 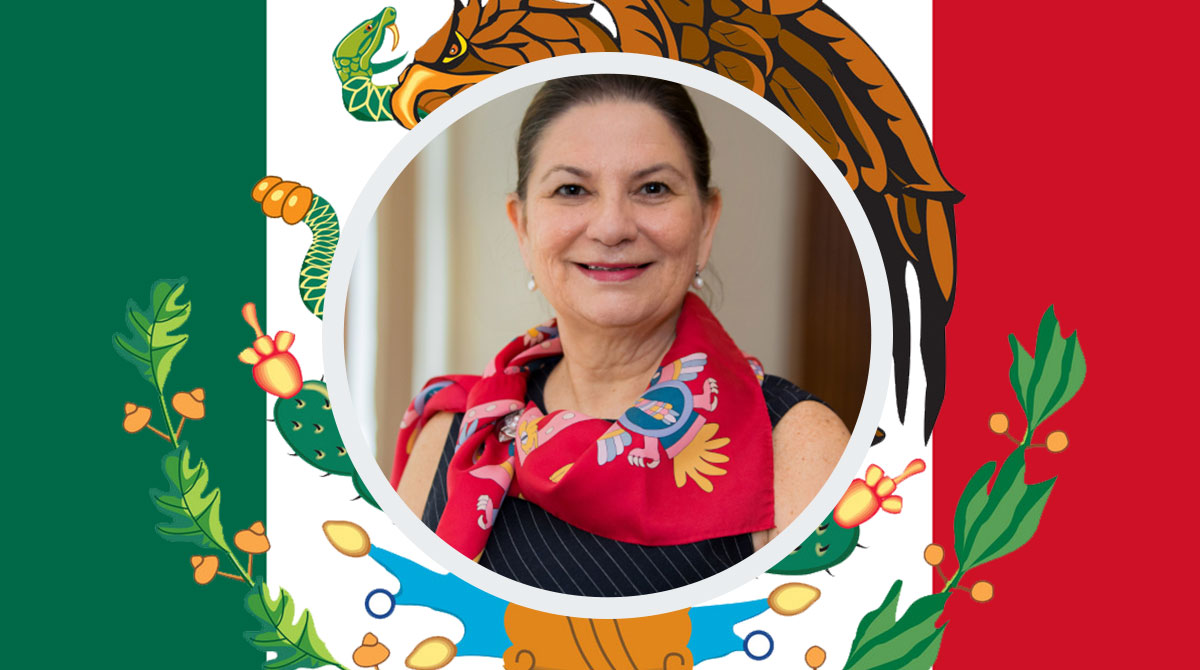 By Gianluca Corinaldesi and Rohini Thakkar

Mexican Ambassador to the U.S., Her Excellency Martha Bárcena Coqui, joined the Director of the Center for Latin American and Caribbean Studies (CLACS) and retired U.S. Ambassador, Patrick Duddy, and the Director of the Duke Center for International and Global Studies (DUCIGS), Giovanni Zanalda, in a conversation about diplomacy and the state of the U.S./Mexico relationship. The webinar was the first event of the new series “A Conversation with the Ambassador,” part of DUCIGS’ Rethinking Diplomacy program (RDP).

Ambassador Bárcena was appointed in December 2018 by Mexico President Andrés Manuel López Obrador, the first woman ever to hold what is considered the most senior and sensitive position for a Mexican diplomat. During her tenure, she led the re-negotiations of the North American Free Trade Agreement (NAFTA)— the largest free-trade area in the world—which laid the foundation for the recently signed U.S. – Mexico – Canada Agreement (USMCA).

“I was once in a lunch with Madeleine Albright, and she was being asked what was the most difficult experience that she had had,” the Mexican Ambassador recalled. “She was talking about Kosovo, the bombing in Serbia, the difficult relationship with Russia. But—she said—the most complex relationship is the one with Mexico.”

“It’s an intermestic relationship, not just an international relationship,” she pointed out, adding that the last 30 years have seen the two countries evolve from a status of “distant neighbors”—as defined by former New York Times correspondent in Mexico, Alan Riding—to the more complex one of “essential partners.”

“One of my biggest challenges is to make the general public opinion in the U.S. understand that the future of the U.S. is directly linked to Mexico and the Mexicans,” Ambassador Bárcena explained. Mexico relies on the U.S. in the areas of automotive, aerospace, pharmaceutical, and agriculture, to name a few. But on the other hand, “many of the essential workers in the U.S.’ agricultural sector, meatpacking industry, and health sector are Mexican—and are undocumented. But they are essential… they might have violated U.S. law, but they are entitled to human rights.”

During the conversation, Ambassador Bárcena emphasized that she strongly believes in the need to rethink diplomacy: “I always ask my students in the Mexican foreign service: ‘When you listen to the words Mexican; Foreign; and Service: which is the most important word of the three?’”—she concluded, as an example of her inspiring principles. “First is ‘Mexican,’ second is ‘Service,’ and the third is ‘Foreign. If diplomacy has a future, it is this attitude of service towards the others. Not living in a bubble.”

This event was organized by DUCIGS/RDP in partnership with the Duke Center for Latin American and Caribbean Studies (CLACS), and the Duke Program in American Grand Strategy (AGS.)  The RDP is supported by a grant from the Josiah Charles Trent Memorial Foundation Endowment Fund.

A Conversation with Mexico Ambassador to the U.S. Martha Bárcena Coqui,

Read a selection of quotes from the webinar:

On the Current State Of US-Mexico Relations

“The main challenge that we all have at the embassy and me as an ambassador, how to really make known to the US public in general that Mexico is this essential partner and that it's part of the past of the present and the future of the United States.”

“Since I arrived here, the biggest challenge was the negotiations (…) in June 2019, with the threat of imposing tariffs on Mexico because of migratory issues. Because I am personally convinced that trade and migration issues should never be linked.”

“The surge of racist and xenophobic narratives puts migrants at risk and does not recognize the enormous contribution of the Mexican American and Mexican community to the US.” Hence the need to rethink diplomacy “to bring into diplomacy more of the civil society, the students, the workers, everyday persons, farmers.”

On the USMCA (United States-Mexico-Canada Agreement) and Its Predecessor, NAFTA

“But the main areas that were not included, and that maybe we have to be included in all bilateral trade agreements of the US with other countries to have a level playing field is labor issues and environmental issues.”

On Matters of Mexican Immigration to the U.S.

“Migration is the more human aspect of the bilateral relationship.”

“We need to have specific policies for different groups of the community – US citizens of Mexican origins, legal residents (both permanent and those under the H2A program), DACA recipients.” “And then we have the population of undocumented workers.”

“… we work on the premise that while they may have violated US law, they still have human rights including labor rights.”

“Immigration is seen from the US side more sometimes as a national security issue. From the Mexican perspective is more an economic and social phenomenon that is related to the complementarity of labor markets and demographic profiles.”

“In Central America, we will have almost 2 million people with food insecurity. And there is a direct relationship between food insecurity and migration.”

“What we see globally, whether it is immigrants from the Middle East into Europe or refugees from Venezuela into neighboring countries in South America suggests that there is a larger issue on which one would hope that our two countries would productively engage.”

On Transnational Crime and Narcotics

“Covid-19 brought some very interesting phenomena, because some of the value chain of chemical precursors to produce mentally Mexico came from China and we covered 19 that flow was interrupted. So, we're trying to reach the level that these value chains are not reconstructed.”

On Cross Border Collaboration on Climate and Environmental Issues

“What you do have in the Mexican US border is an incredible border from the point of view of climate and environment.”

“When I was ambassador to Denmark, Norway and Iceland, I used to tell them that Mexico is so generous that we don't charge you anything for the most important export of Mexico to the Nordic countries, which is the Gulf Stream!”

On Foreign Participation in The Mexican Oil and Gas Sector

“Will American investors be permitted to flourish in the way that seemed to be the intention of the changes to the constitution?”

“They can feel safe with the legal framework that we have”.

Read the article on the event on Duke Today:

Read an article on the event by the Duke Chronicle: