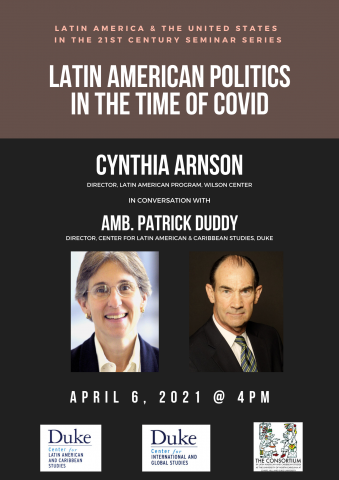 Latin America has suffered greatly during the pandemic with the highest mortality rates of any region in the entire world, said the director of the Latin America program at the Wilson Center Dr. Cynthia Arnson.

As of that time, Brazil accounted for one of every four COVID deaths in the world, and other countries such as Peru and Mexico have been hit nearly as hard.

“Why has that been the case? One reason has to do with the high rate of urbanization,” Arnson said. “Latin America is the most highly urbanized region of the entire world. There have been enormous migrations out of rural areas over the last several decades.”

This migration has led to a high concentration of poor people in urban areas, especially in slums where the possibility of social distancing is pretty much non-existent, she said.

The high rate of infections and deaths has seen a collapse of the countries’ health sectors, even in a country like Brazil, which had a very robust public health system and now is completely overwhelmed.

The pandemic has also had a devastating economic impact, she said. Countries in the region have gone on repeated cycles of lockdown, contracting an average of between seven and eight percent, according to the International Monetary Fund.

Arnson said this comes at an unfortunate time, politically, when the region has seen popular protests against incumbent regimes and a disaffection with democracy overall. The Chilean elections have been postponed, investigations against corruption scandals in Brazil have been dismissed, and there is a growing dissatisfaction with government leaders and their capacity to deal with the COVID-19 crisis in a way that seems fair.

“There’s hardly a country that has escaped some scandal related to COVID, whether it’s the overpricing of PPE or even of coffins. Politicians’ family members and well-connected individuals having access to vaccines long before they were available to the general population.” Arnson said. “People say that crises bring out the best in people, but they also bring out the worst. Well, COVID has brought out the worst.”

There has also been an outbreak of anti-migrant sentiment against the millions of Venezuelan refugees who have settled in other countries and add to the pressure on already underperforming public health systems.

“It’s not a pretty picture,” she said.

Asked about the situation in Venezuela and how bad she thought the pandemic was there, she said that the real answer is unknowable due to the utter lack of transparency in the country.

“But based on what we do know about the collapse of the health sector prior to COVID, I think we have to assume that it’s horrendous.”

Venezuelans are benefitting to some extent from the Russian and Chinese vaccines, but because so many doctors and nurses have left the country, there is no longer any health infrastructure to get vaccines to the people.

Arnson said the Maduro administration must be held responsible for the inability of the international community to bring in humanitarian relief for the people still left in the country.

She also commented on the perceived vacuum that the United States left in the region which Russia and China were able to fill, providing vaccines at a much lower cost, as well as ventilators, PPE, etc.

“Both China and Russia have creatively used proactive presence in Latin America as a way of furthering diplomatic and strategic goals,” Arson said. “The United States for a long time was simply absent.”

Some glimmers of optimism in the region Arnson mentioned was e-commerce and the green energy transition, especially solar and green hydrogen, which Chile and Uruguay have already undertaken.

“I think that the people who can look at that sector and take advantage of the interest in the United States in fostering that kind of growth and capacity will put themselves ahead of the pack,” she said.

The conversation was moderated by Patrick Duddy, former U.S. Ambassador to Venezuela and director of the Center for Latin American and Caribbean Studies at Duke.