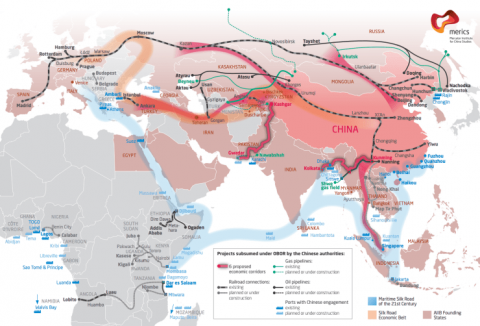 This blog post was originally published on the Nicholas School of the Environment website on December 5, 2018 (LINK).

This piece is the first of a 3-part series on the Belt and Road Initiative (BRI), and the 5-day conference on environmentally and socially responsible international investment held at Duke Kunshan University this October.

A saying I have encountered several times since arriving in China is 要想富先修路 (yào xiǎng fù, xiān xiū lù). Roughly: if you want to get rich, first build a road.

While the proverb has broader implications—namely, that finding or creating the means to access opportunity is the first step toward achieving future success—it also reflects China’s recent trajectory in a more literal sense. The country’s dramatic economic growth over the past 50 years has been fueled in significant part by massive infrastructure and building investments domestically, as well as growth in the industrial sectors that produce the raw materials of this construction: steel, concrete, aluminum and more. But as the need for these new projects has slowed in China, production capacity in these industries has outstripped domestic demand.

To keep getting rich, then, perhaps one might build a road somewhere else. Many Chinese construction companies have turned to opportunities abroad in recent decades and are entering new markets at a rapid pace, seeking buyers for their products, accumulated expertise and raw materials. China is, of course, not the only country whose domestic firms have turned outward into the world, making forays into new markets far beyond their home borders—U.S., European and Japanese companies (among others) have been doing so for decades longer, operating cumulatively in far greater volumes of investment capital. But the speed of China’s entry into the realm of outward foreign direct investment (OFDI) has been unusually rapid, which has in turn created some problems for both Chinese companies and Chinese lending institutions (not to mention reports of problems in some of the countries receiving investment). The unusually close relationship between the Chinese state and many of China’s largest companies, as well as some other relatively unique features of China’s economic and political systems, have also made the country’s growing presence on the global OFDI stage a widely watched development, both by traditional FDI lenders and by countries where investments are taking place.

But Chinese OFDI has gained even more attention globally since 2013, when President Xi formally announced the Belt and Road Initiative (BRI) [at the time translated as One Belt One Road (OBOR) to match the Chinese name of 一带一路 (yī dài yī lù)]. The BRI is the evolving policy of the state to directly promote investment in a stunning range and scope of infrastructure projects beyond its borders, largely through state loans, international agreements, and other domestic incentives. Echoing historical Silk Road routes, a number of massive BRI development corridors have been sketched out, spreading north from Beijing into Mongolia and Russia, reaching westward into Pakistan and Europe across Central and Western Asia, and dipping into South and Southeast Asia through countries like Myanmar and Indonesia. 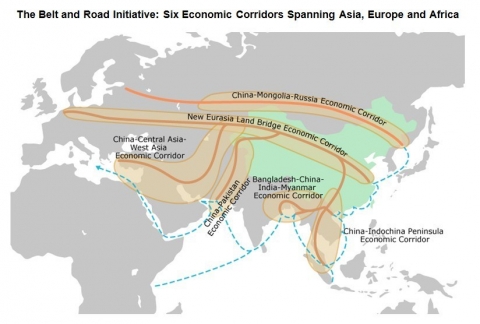 Sea routes known as the complementary Maritime Silk Road stretch from Indonesia to the East African Coast, tapping into ports and further trade lines leading east and west. In each of the dozens of variations on the map above, China becomes the central node of a great web of roads, railways, power plants, ports, and pipelines, pulling the center of global trade toward the Far East. Moreover, countries far beyond the ancient Silk Road routes are now either invited to join or already considered to be part of the plan: Latin American nations like Panama and Bolivia have signed on to participate formally, and even a few projects in Brazil now bear the BRI label in Chinese state-run media announcements. Recent talk even includes planned forays into the Arctic under the same BRI banner. 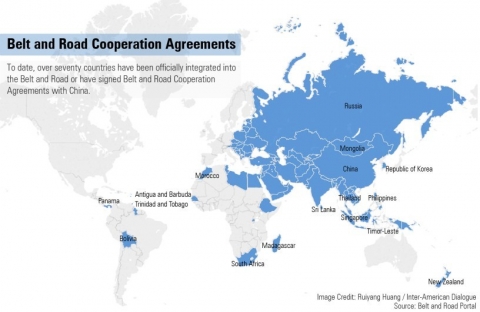 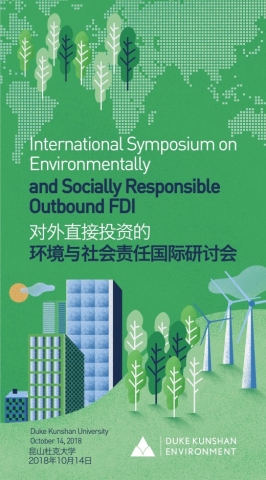 For these reasons and others, over a hundred participants, students, and public observers from around the world gathered at Duke Kunshan University this October, for 5 days of events meant to help infuse thoughtful priorities into the conversation around the largest coordinated building push the world has ever seen.

BRI-associated projects, while not formally listed out in any complete public database, include transportation and shipping infrastructure like new and upgraded ports, pipelines, roads, and railways. They include energy generation investments—from solar, wind and water to oil, gas and coal. And conversations around BRI occasionally include Chinese investments beyond physical infrastructure—whether vacation resorts or robotics manufacturing, these sectors are nonetheless a piece of the Chinese state’s strategies to transition China’s economy from a low-end manufacturing powerhouse to a global hub for high-tech goods and services in the coming decades.

The environmental community’s interest in BRI projects, however, has been more centered on physical construction. All building, by definition, has an impact on the natural world. At minimum, construction reshapes the land that falls within its physical footprint. But most projects have a whole host of other environmental effects, whether on local ecology, harvest patterns, air and water quality, even distant changes to resource extraction and mining that might supply raw materials for a new endeavor hundreds of miles away.

And infrastructure projects have social impacts as well—most projects are intended to bring some combination of economic growth, energy or improved connectivity to a region. But this growth can also be disruptive and damaging, even while providing other benefits. A sudden boom of new jobs can draw in more new residents than a region can handle, overloading health and sanitation systems, distorting housing markets, upending traditional lifestyles, and elevating crime and social unrest. The departure of those new workers after construction is over, if the growth was temporary, can leave a region gutted after plans were radically changed to accommodate the boom times.

The events at DKU included the day-long, public International Symposium on Socially and Environmentally Responsible Outbound Direct Investment, another special day-long session focused on issues related to Central Asia, and a three-day workshop on using and communicating spatial data to help address all of these planning challenges. Together, the meetings focused on a central theme containing a multitude of other smaller questions: How can researchers, policymakers and communities on the ground help guide investments toward better outcomes—for the investors, for the environment and for the people that live in the places where these projects will happen?

Estimates of the total value of structures and building work planned under the banner of the BRI range into the trillions, by some measures dwarfing any single coordinated building program in human history. Within this massive initiative, however, the details—the “hows” and “wheres” of planning for each project—could make all the difference between whether a given road (for example) brings a region newfound prosperity, or irrevocably disrupts the local fabric of life and ecology, wasting resources in the process.

It’s important to remember that individual BRI projects planned in very different countries will each have unique social and legal circumstances, and will involve the unique incentives and needs of different companies and stakeholders. But the fact that this huge array of projects are all being linked together politically under the banner of BRI may provide an opportunity for interested parties to help influence expectations and outcomes for this staggering number of projects all at once. And if China were to take the lead on implementing cutting-edge best practices in planning for this set of projects, it could signal a shift in global expectations around development that would be game-changing for development far beyond the scope of the BRI.

So what exactly goes into thoughtful, effective planning around the environment and society? Everyone who attended October’s conference sessions and workshops had a unique answer to this question. What made these events on the DKU campus so special was the sheer diversity of experiences and perspectives brought together into one room, for 5 days of open learning and dialogue. 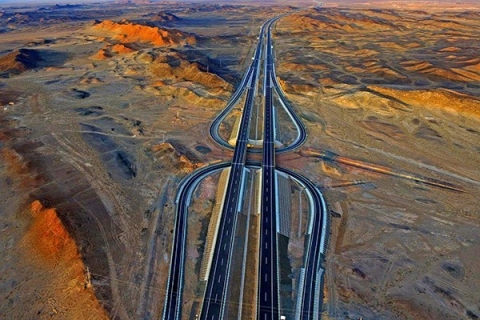 Sunday’s talks, which were open to the public, painted a rich portrait of the challenges the community of BRI stakeholders hopes to tackle, as well as the enormous opportunities presented by the initiative. The day was facilitated by tireless real-time translation from Chinese to English or English to Chinese as the situation required, broadcast to audience members via small radio headsets from a booth high in the corner of the auditorium. Saturday’s talks and panels, which were open to a smaller group of invited participants and DKU students, focused more directly on issues related to the Central Asian corridor of development, which is intended to strengthen linkages through Xinjiang in western China all the way to Pakistan and Europe. This narrower focus allowed an even more detailed exploration of some of the broader themes that were carried across both days.

Thanks to the more than a dozen participants and conference organizers who took the time to speak with me over the week of the conference, sharing their perspectives on the event itself and the topics discussed in this post.

Part 2 of this series delves into these themes in more detail, and highlights some of the diverse perspectives and key issues represented in the event’s panel sessions and broader dialogue.