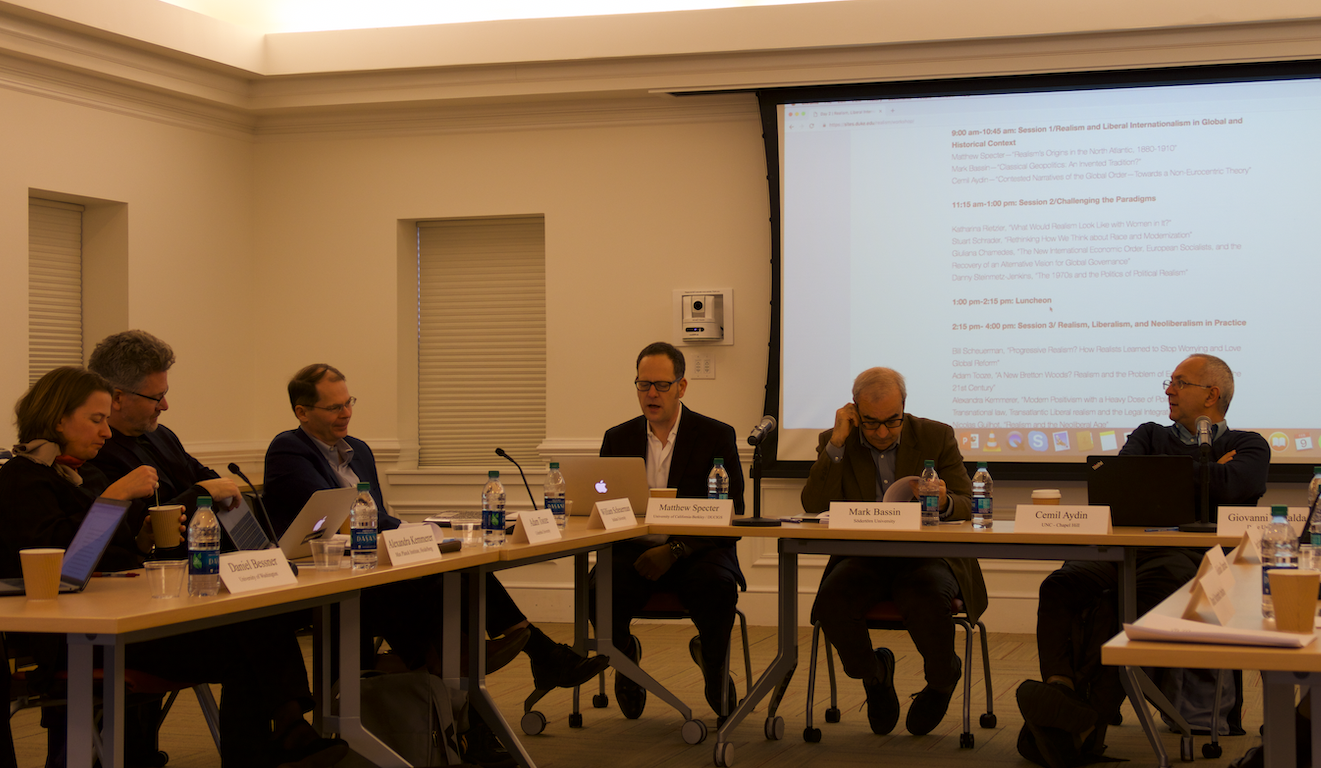 On February 8-9, 2019, Daniel Bessner and Matthew Specter co-organized a scholarly workshop on behalf of the Duke Center for and International and Global Studies entitled “Realism, Liberal Internationalism, and History: Conceiving a New Research Agenda.” On the first evening of the workshop, a select group of invited guests and Duke faculty participated on a public panel on “Realism and Liberal Internationalism after Trump.” Highlights of the public event may be accessed here.

The workshop on Saturday, February 9th examined the politics and history of realism and liberal internationalism, the two major theoretical paradigms in Western international thought. The invited scholars discussed the concept-notes prepared and circulated before the workshop.  The three sessions of the workshop focused on various themes.  The first addressed “Realism and Liberal Internationalism in Global Context,”(Specter, Bassin and Aydin); the second focused on “Challenging the Paradigms,” (Rietzler, Schrader, Chamedes, Steinmetz-Jenkins); and the third, “Realism, Liberalism, and Neoliberalism in Practice”(Scheuerman, Tooze, Kemmerer, and Guilhot), explored modern instantiations of these two theoretical approaches. Of the eleven original short papers, the four by Chamedes, Scheuerman, Specter, and Steinmetz-Jenkins have been edited and reproduced as working papers in Duke's Global Working Paper Series.

The election of Donald J. Trump to the presidency of the United States has called into question some of the assumptions that have guided U.S. foreign policy since the nation's victory in World War II. On one hand, realists like Stephen Walt and John J. Mearsheimer have pointed to Trump as the necessary outcome of a U.S. foreign policy that was overambitious and unattuned to the inability of great powers to remake the world in their image. On the other hand, liberal internationalists like Thomas Wright and Heather Hurlburt have argued that Trump's foreign policy signals a crisis in the so-called "liberal international order" that, they argue, has defined world politics since 1945. Regardless of where one stands in this debate, it is clear that Trump’s victory has encouraged an interrogation of the past, present, and future of the U.S. role in the world.

In his symposium remarks, Daniel Bessner argued that the significance of Donald Trump is less for what he has done in the field of foreign relations—he has, for the most part, remained relatively true to the commitments and assumptions that have defined the American empire and U.S. hegemony since 1945—but for the space that he has opened for Americans, both intellectuals and the public alike, to reconsider some of their fundamental assumptions about the U.S.  role in the world. Simply put, the shock of Trump’s victory forced Americans to question whether the bargain of unilateralist, imperial hegemony, made after World War II, was worth the cost. 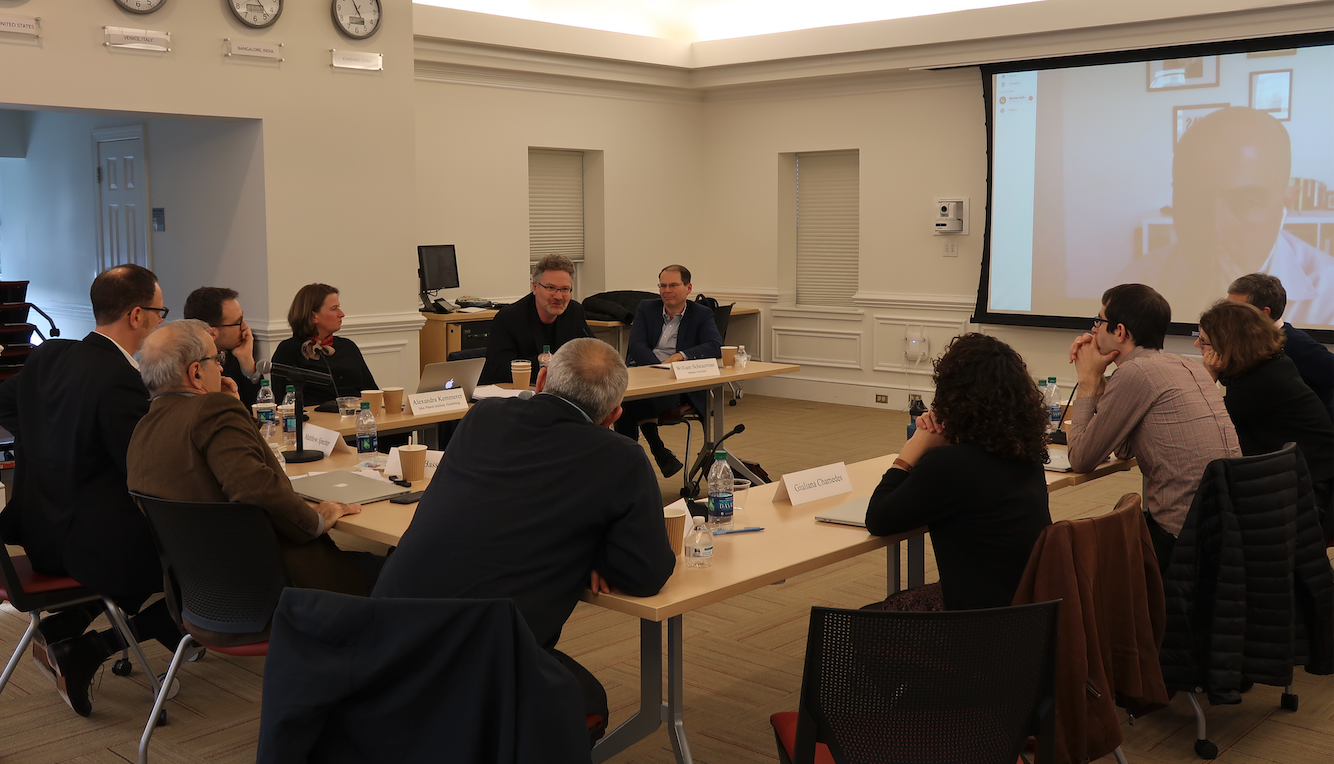 Bessner also highlighted the foreign policy establishment’s inability and unwillingness to hold itself accountable for the disasters in Afghanistan, Iraq, and Libya. In particular, he claimed that recent calls to restore the status quo ante Trump reflected a profoundly ahistorical reasoning that placed the North Atlantic at the center of world history. As recent scholarship by Lindsey O’Rourke and Paul Chamberlin has demonstrated, the Cold War was hardly “the long peace” that some analysts, most notably John Lewis Gaddis, previously claimed it was. Instead, throughout the Cold War millions of people, primarily in the Global South, fell victim to the machinations of two superpowers engaged in a narcissistic struggle for hegemony and domination. In short, Bessner maintained that for the majority of the world’s peoples the “liberal international order” was anything but.

In his symposium talk, Specter proposed that there are at least two major realist traditions in American foreign policy thought, and that only one represents a potential resource for today’s progressives. If realism signifies the naturalization of great-power rivalry, the primacy of a narrowly-conceived national interest, and a commitment to the maximization of hard and soft power, then it offers little of value today. If, however, realism signifies restraint, prudence, caution, and foresight, it provides a theoretical model of use to those skeptical of U.S. empire. Indeed, Specter suggested that this second realism could be an important resource for those looking to reshape the U.S. role in the world in the post-Trump era.

The majority of the conference focused on more academic concerns. It began from the premise that, for historiographical reasons, a skeptical look at old categories is necessary. Today, most IR theorists claim that realism, liberalism, and internationalism are traditions of Western political thought whose origins stretch back to Rousseau, Hobbes, Machiavelli, Augustine, and Thucydides. Only recently have intellectual historians challenged the validity of this narrative by arguing that realism is of a more recent vintage. In his The Gentle Civilizer of Nations: The Rise and Fall of International Law, 1870-1960 (2001), Martti Koskeniemmi claimed that German-Jewish jurists, who were trained and educated in the Weimar Republic, became the vanguard of realism in the United States. Namely, these jurists emphasized the fragility of law, which became a central feature of the realist critique. In Foundations of the American Century: The Ford, Carnegie and Rockefeller Foundations in the Rise of American Power (2012), Inderjeet Parmar underlined the central role foundations played in funding and developing the realist paradigm. Tellingly, Parmar describes realism as the ideology of an East Coast elite that was bent on dominating the world. Finally, in After the Enlightenment: Political Realism and International Relations in the Mid-Twentieth Century (2017), Nicolas Guilhot underscores the importance of the 1930's crisis of European liberalism to the development of realism as a coherent paradigm. Specifically, Guilhot maintains that realism’s intellectual roots are found in antidemocratic discourses of political thought, including prominently the writings of the illiberal jurist and apologist for the Nazi state, Carl Schmitt. Together, the scholarship of Koskeniemmi, Parmar, and Guilhot suggests that realism is inseparable from the counter-enlightenment, anti-rationalist, and capitalist intellectual contexts in which it first emerged.

Nevertheless, several papers presented at our workshop challenge this pessimistic understanding of realism. Both William Scheuerman and Giuiliana Chamedes argue that realist principles or sensibilities are not a priori incompatible with far-reaching projects of global reform. Building on his Hans Morgenthau: Realism and Beyond (2009) and The Realist Case for Global Reform (2011), Scheuerman in his paper claims that realism’s reputation for conservativism oversimplifies the fact that many realists were politically progressive. For instance, Morgenthau believed that nation-states could help construct supranational institutions, practices, and mores that over time could support more ambitious schemes of global government.

Chamedes, meanwhile, in her paper demonstrates that several supporters of the 1970s New International Economic Order (NIEO) framed their support for this supposedly “utopian” program in consciously realist terms. To take one example, advocates for the NIEO affirmed that if the Global North rejected the Global South’s demands, it would be denying the “reality” of interdependence and mutual susceptibility to ecological or nuclear catastrophe. In distinct ways, the papers of Scheuerman and Chamedes indicate that one cannot simply equate realism with conservatism or anti-utopianism, though these impulses were certainly evident in realist thinking.

In his paper, Daniel Steinmetz-Jenkins emphasizes the permeability of the intellectual boundaries between realism and liberalism (in its neoconservative variant) by examining the political identity of Raymond Aron (1905-83). Steinmetz-Jenkins suggests that the Vietnam War is the key to understanding Aron’s transformation from realist to neoconservative.

Finally, in his paper, Matthew Specter argues for a different genealogy of realism. In contrast to accounts of realism that assert the centrality of midcentury German émigrés like Morgenthau, John Herz, or Arnold Wolfers, he asserts that realism was first constituted through a transatlantic dialogue that took place between U.S. and German thinkers in the fin-de-siecle. (NB: The paper has been subsequently deeply revised and no longer reflects the exact views of the author; it will appear as chapter one in Atlantic Realisms: Political Thought and Foreign Policy, 1880-1980 (Stanford University Press, forthcoming).)

In various ways, the four papers presented here reflect a new strand of historiography that builds upon, but moves beyond, recent scholarship that emphasizes the interwar and counter-enlightenment origins of realism. We hope that these papers stimulate discussion and encourage further work on this important subject.

The workshop’s participants were:

“Contested Narratives of the Global Order—Towards a Non-Eurocentric Theory”

“The New International Economic Order, Utopian Realism, and the Recovery of an Alternative Vision for Global Governance”

Nicholas Guilhot, Researcher, Center for International Research in the Humanities and Social Sciences

“Realism in the Neoliberal Age”

‘Modern Positivism with a Heavy Dose of Policy Considerations: Transnational Law, Transatlantic Liberal Realism, and the Legal Integration of Europe”

“Women’s International Thought and the History of Realism”

“Rethinking How We Think About Race and Modernization”

“The 1970s and the Politics of Political Realism”

“A New Bretton Woods and the Problem of ‘Economic Order” 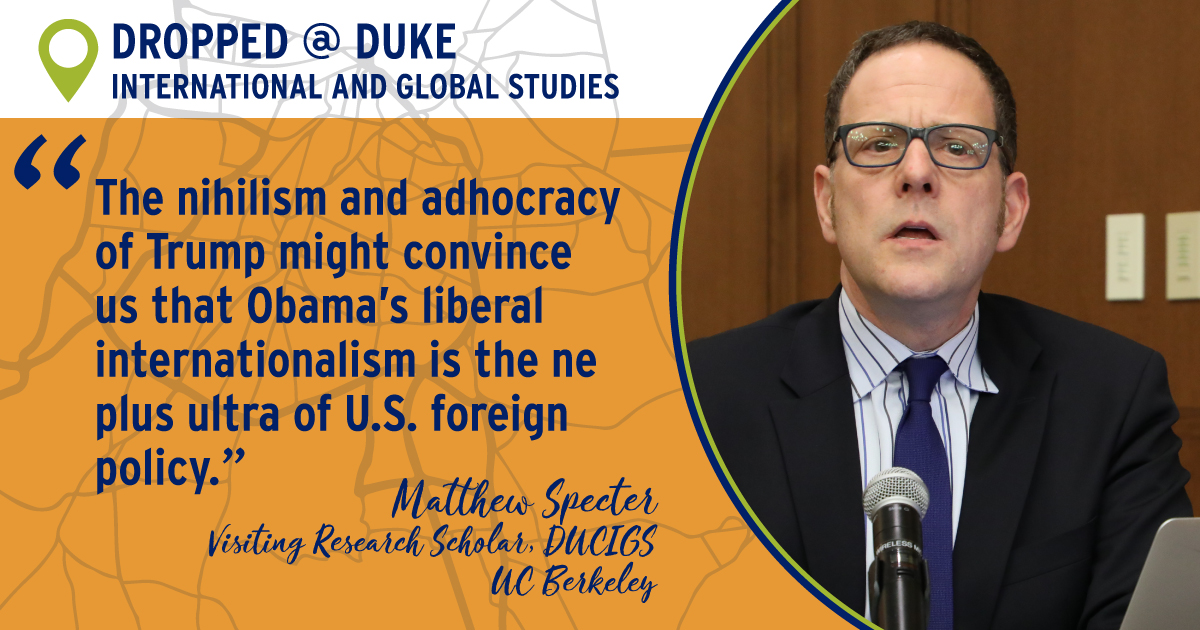