This article originally appeared on the Duke Global website. 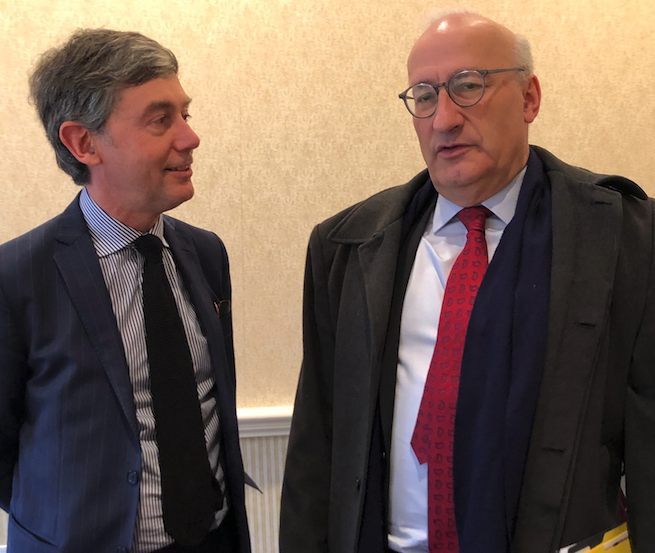 During a public discussion on Feb. 20, the Hon. Philippe Étienne, Ambassador of France to the United States, spoke candidly about the challenges facing European nations.

“We must never forget we are democracies,” Ambassador Étienne said. “And we must speak about our values.”

The ambassador was greeted at the Washington Duke Inn by a full room of Duke faculty, staff, students and members of the local community.

Georg Vanberg, chair of the Political Science department at Duke University, moderated the discussion with the ambassador.

Ambassador Étienne also bestowed the insignia of Knight of the French Order of Academic Palms (L’Ordre des Palmes Académiques) to Adrian Bejan, the J.A. Jones Distinguished Professor of Mechanical Engineering in the Pratt School of Engineering.

“Not many Blue Devils can call themselves knight,” Duke President Vincent Price told the crowd as he began the ceremony. “This is a wonderful achievement.”

At the event, President Price also noted that Ambassador Étienne is the first French ambassador to visit campus.

The ambassador was joined by Vincent Hommeril, consul general of France in Atlanta, Marie-Claire Ribeill, honorary consul of France, and Jérémy Lauer-Stumm, deputy economic counselor at the French Embassy in Washington D.C. 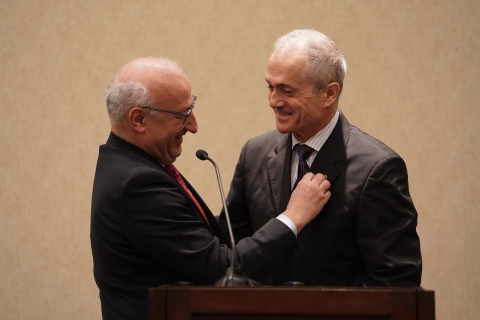 The Future of Europe

In May 2019, French President Emmanuel Macron nominated Étienne, a close advisor, as ambassador to the United States.

Over the past year, France has weathered frequent Yellow Vest protests, the United States beginning its formal withdrawal from the Paris climate agreement and Great Britain's departure from the European Union.

Asked by an audience member to comment on the current social fabric in France, Ambassador Étienne said the issues that the country faces are common to many democracies.

“We must preserve our democracies, but we must understand how also to imagine new ways of making people feel they are associated with this process,” Ambassador Étienne said.

He pointed to recent reforms implemented or considered in France, including new labor laws, tax codes, transportation policies and measures to address unemployment.

“But people must feel the benefits, of course,” Ambassador Étienne said. “And they also must feel as if it is fair.”

Another member of the audience asked how climate change negotiations will proceed with a chasm between the official stances of the United States and Europe.

These parties will continue working together on climate change, the ambassador added, and this includes American governors, cities, businesses and the research community.

Professor Vanberg asked about the possibility of an attractive post-Brexit trade agreement between the U.K. and the European Union.

“Do you worry that this might ultimately pose further challenges to European integration and raise incentives for other countries to begin thinking about withdrawing?” Vanberg asked.

The ambassador replied that although French government regrets Britain’s decision, France also respects the choice of the British people. It’s not simply about trade, Ambassador Étienne stressed, and Brexit will also alter security, migration, research and even higher education in the future.

“For those big challenges, is it really how I am convinced personally, that we are better equipped to face these challenges together?” Ambassador Étienne said. “And can we prove it in reality?”

Following the discussion, the ambassador honored engineering professor Adrian Bejan “for a life dedicated to science” and designated Bejan as a Knight of the French Order of Academic Palms. The award, created by Napoleon in 1808, honors individuals for contributions to French culture and for service in teaching, scholarship and research.

“This order is one of the oldest and most prestigious honors given to academics by the French government,” Ambassador Étienne said.

Bejan’s work in engineering science and applied physics spans thermodynamics, design and evolution. In 2019, a study published in PLOS Biology designated Bejan among the top 0.01 percent of leading world scientists based on impact of citations and among the top ten of engineering scholars worldwide. 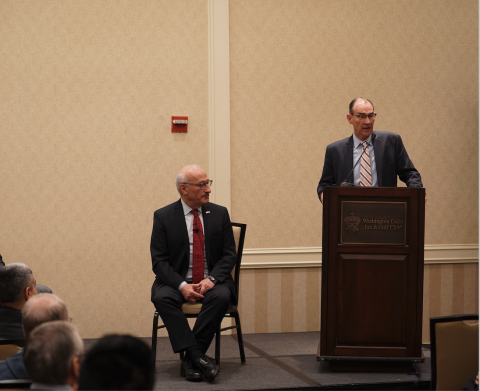 “Because of the outstanding scientist and prolific writer that you are, this ceremony cannot possibly contain enough hours to mention your remarkable number of publications and awards,” Ambassador told Bejan.

During his career, Bejan has authored more than 650 peer-refereed articles and 30 books. His latest book, “Freedom and Evolution,” explains how many familiar concepts have a foundation in physics and engineering.

Ambassador Étienne was once France’s ambassador to Romania, and shared this connection with Bejan, who was born in Romania. Switching briefly to the Romanian language, the ambassador invited the professor to accept the award.

After receiving the medal of honor, Professor Bejan noted that many of the words, units of measure and symbols of science originate in French.

“France played a big part in creating this empowering knowledge. And that’s why I feel at home among French ideas, books and colleagues,” Bejan said. “This is why I am so honored today.”

The Office of Global Affairs, the Department of Mechanical Engineering & Materials Science at the Pratt School of Engineering, the Political Science Department at the Trinity College of Arts and Sciences and the Duke Center for International and Global Studies co-organized the event.