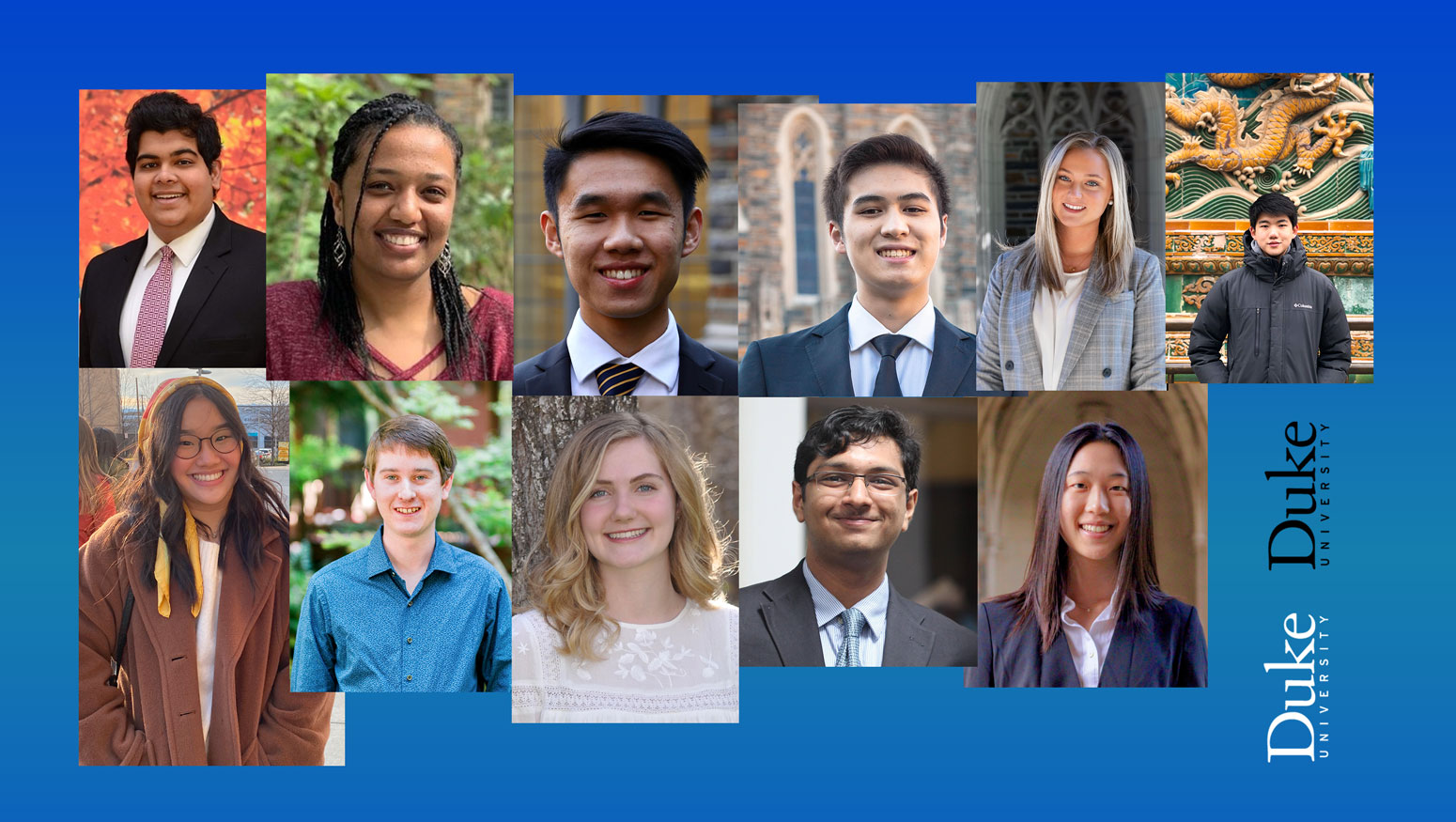 The webinar was the first event of a new series “75th Anniversary of the United Nations (UN75) – Action Celebrations", part of DUCIGS’ RDP.

The DUCIGS/Rethinking Diplomacy Program (RDP) is supported by a grant from the Josiah Charles Trent Memorial Foundation Endowment Fund. This first event was co-sponsored by POLIS: Center for Politics and the Duke International House (IHouse).

More than a hundred students, faculty, and practitioners got an opportunity to hear first-hand from the UN representative and learn how to engage in this global drive.

Duke students from the class Globalization and History (HIS 201 – PUBPOL 236) wrote their reflections after the event. Below are some quotes from students’ reports.

“I believe taking the time to understand the voices of those who the UN wants to serve is a socially responsible action and a sign of skilled leadership… I think the opinions of youth are particularly relevant, as this is the world they will inherit.”

“Through this experience, I was able to see how globalization is more than just industry and economic growth. It involves the exchange of ideas, which facilitates greater international collaboration. This conversation displayed the world in a different format: one where we are all united in the fact that we are all people rather than members of separate nations. We are entering a world where the call for diversity, inclusivity, greater human rights, moral leadership, and transparency are becoming the new normal. The issues that exist today are not independent of each other. Tackling these issues as a collective democracy to uplift nations that are traditionally underrepresented in international conversations such as these, while also addressing institutionalized issues all over the world is an encouraging move towards a more promising future.”

“I was pleased to hear from Cannon that globally, there is increasingly a recognition of the relationship between these issues, as climate change played a part in exacerbating the consequences from Covid-19. Indeed, climate change appears to be a large part of the UN’s plans for the foreseeable future, which is so important because multilateralism is the only way to make genuine progress on such a truly global issue.”

“One stand-out statistic was that more than 50% of survey respondents were ages 30 or younger. This is critical seeing as three out of the four survey questions are focused on long-term goals, and it is this generation that will grow to be the global leaders that lead the charge to achieve those goals. As a member of this demographic, I felt more connected to the results of the survey because I could place myself in the pool with my global peers of similar ages. It gave me more context and I felt as though I were looking through a tunnel to the priorities and aspirations of the future.”

“Another result from the research I was quite pleased to hear about was that a lot of respondents felt that the UN needs to be more effective in being able to resolve international issues. This is fantastic to hear especially given that the UN depends on funding from countries and therefore needs to be careful to ensure that it does not insult countries that donate significantly such as the United States or China.”

“..Globalization can be viewed as both the root cause and the key solution to this global pandemic. So, is globalization a good thing or a bad thing? Depends on who you ask… But, the UN75 project shows that as the world becomes more and more integrated, people generally only want even more global solidarity and international cooperation.”

“In response to the talk, I would have liked to understand how the UN prioritizes issues based on their actual ability to solve them. While it’s important to understand the concerns of member countries through a survey, the UN is more suited to solve certain issues (that require global cooperation) than others. While the UN can allocate dollars towards issues like poverty, education, healthcare, etc., these are not necessarily issuing that require global cooperation in the way that issues like pandemic response and climate change do. A framework for prioritization at the UN should account for what the UN can uniquely do that private philanthropy cannot..”

“With all of these new insight into the priorities of people around the world, a big question still remains: what is the UN going to do with it? What does the future look like, both internally and externally, for future UN operations? Many people want the UN to have moral leadership and be more inclusive, engaged, accountable, and effective. Many want the UN to do more to show ordinary people that they care about their needs and priorities and are actively working towards realizing them. The emphasis on inclusivity, accessibility, and morality, as well as intersectionality, show a lot of promise for the future of our planet and our collective ability to address some of the world’s most pressing issues. Yet, I remain unsure about the feasibility of achieving this in a world that has yet to show a strong, serious, and lasting, collective commitment to seeking justice.”

“At its core, the UN was created as a peacekeeping body, and allowing an ongoing economic conflict to fester doesn’t seem like the best maintenance of that goal. Simply serving as an intermediary for discussions or facilitating trade talks would be a better response than the idle stance undertaken so far.”

“Another finding I found particularly interesting was that respondents in lower human development countries were more optimistic about the state of the world in 2045 than respondents in higher human development countries. One hypothesis I have about why this may be the case is that the mismanagement of the pandemic has shown weaknesses in policy, particularly in highly developed countries in North America (notably the US) and Europe (notably the UK and France). The inability of governments of these countries to effectively control the spread of COVID-19 likely made residents of these highly developed nations to be increasingly pessimistic about the state of the rest of the world.”

“When I heard that over 1.3 million people had engaged with this initiative, and that the program had specifically reached out to a broader audience and targeted groups of people like college students, sports communities, and even youth gaming companies, it became clear to me how the United Nations has this branch that is invested in diverse perspectives, and not only generalized governmental processes on the international scale.”

“What particularly interested me in the UN75 report was the relationship between “human development level” and attitudes toward international cooperation. It appears that the lower the human development level of the respondent’s home region, the less they considered international cooperation as important. This strong correlation between the two factors is probably not coincidental. It can be argued that the regions which have benefited more from globalization and the consolidation of economic power would prioritize international relations, whereas lower-income countries that have more likely experienced exploitation and harmful foreign intervention would not have such a positive perception of it. The history of the split between “developed” and “developing” countries cannot be separated from the explosion of Western imperialism and global capitalism. To claim that a region or nation is at a lower level of human development because it isn’t as industrialized or economically powerful as countries like the United States or Germany is both deeply problematic and completely ignores the vast inequalities that those countries’ economic systems have produced. The fact that the UN fails to recognize this is one of several reasons why I am incredulous about the kind of impact the organization can truly have for the nations that need it the most.”

“One question, which was not really answered, but I would love to hear more UN research about, is the idea of reparations for African Americans who have been disenfranchised by their ancestral displacement as slaves in Europe and North America….I would personally hope for a more comprehensive study on the economic, social, and political effects of wealth redistribution for those historical challenges of racial inequality and injustice.”

“This seminar has renewed my faith in the UN’s ability to zero in on top issues and has shown me that the  secretary-general is eager to improve. If I were asked about the UN’s effectiveness prior to this talk, I would have responded like many others: “not promising”. My outlook is much more optimistic now.”