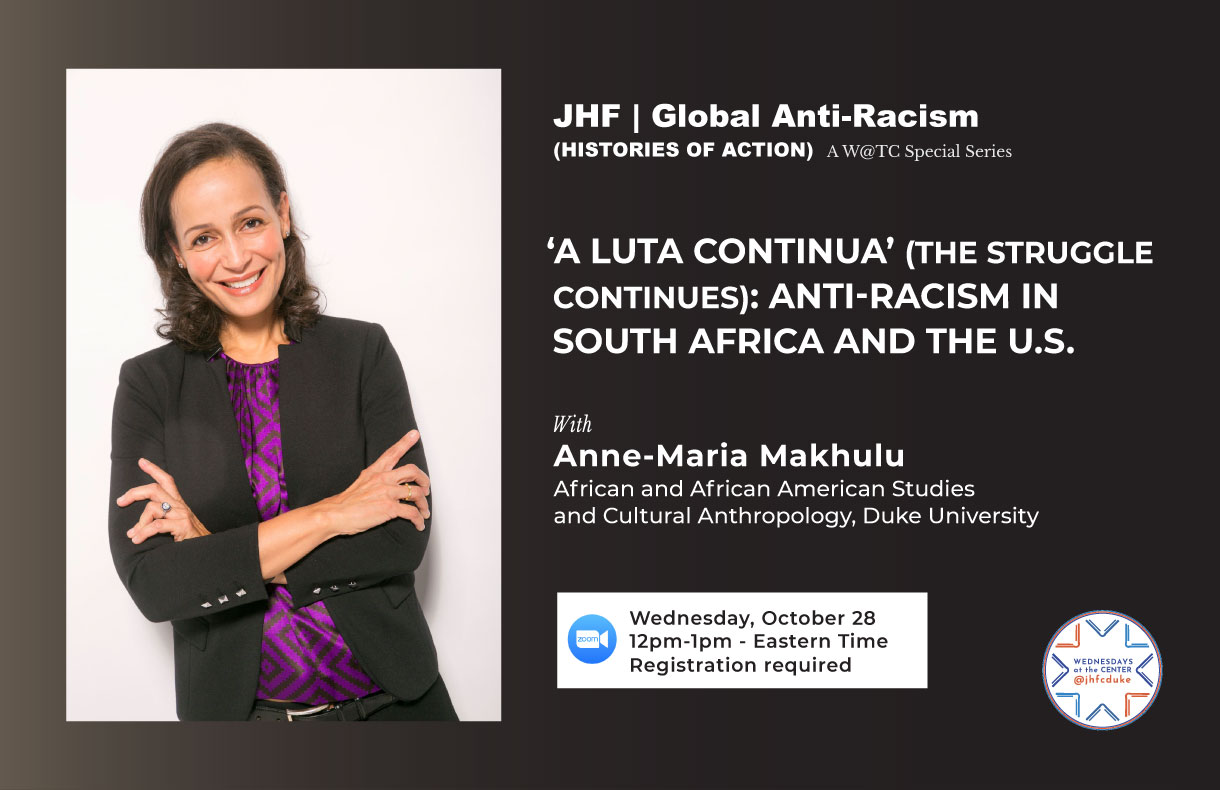 Wednesdays at the Center, Anne-Maria Makhulu 'A Luta Continua'

When it comes to racial history, the U.S and South Africa (and the U.K.) “are all knit together by anti-Black racism,” said Anne-Maria Makhulu at the Duke event: ‘"A Luta Continua" (The Struggle Continues): Anti-Racism in South Africa and the US.’

Anne-Maria Makhulu is Associate Professor of Cultural Anthropology and African and African American Studies at Duke University, and the author of "Making Freedom" and co-editor of "Hard Work, Hard Times." She is also co-chair of the Concilium on Southern Africa (COSA).

Such histories have created and perpetuated a structural system of exploitation and inequality, she argued. “White families across the United States might have about $90 to $100,000 worth of wealth and black households [have] about $6,000. It's not even one tenth. In South Africa, the disparities are even greater.”

Along with common histories of racial divides, the two countries also experienced shared forms of struggles against anti-Black racism, she added.

Just focusing her attention to the years 2014-2016, for example, Makhulu pointed to the 2015 #feesmustfall protests across all South African public universities. At that time, students of all ethnicities demonstrated to demand free education, railing against a system where government had been reducing the per-capita amount of money contributed to each student. And turning to the U.S., Makhulu observed, it is meaningful that just the year before, in 2014, the death of Michael Brown in Ferguson, MO, seemed to spur a resurgence of the Black Lives Matter movement. In that context of small-town Missouri, in the outskirts of St. Louis, the incident congealed “a whole series of other questions about the ways in which Black people […] are required to generate municipal revenue [through court fines; through small infractions like jaywalking, and so on],” she noted. “And in so doing, of course, they are brought into the system of incarceration and jails.”

These common struggles across the two countries inspired the title of the event. The slogan “A Luta Continua” is borrowed from the fight for emancipation of Mozambique in the ‘60s. At that time, ’A luta continua; a vitória é certa’ (The struggle continues; victory is certain) captured the imagination of South Africans, who will later have to struggle another two decades before they can experience liberation, Makhulu explained.

Charles Piot, Professor of Cultural Anthropology and African and African American Studies at Duke, and co-Director of the Duke Africa Initiative, moderated the discussion. Speaking about the anti-immigrant politics in the U.S. and in South Africa, professor Piot defined them as “racial projects […] affected by racial logics through and through.”

This eighth event in the ‘Wednesdays at the Center’ series was organized by the Duke University Center for International and Global Studies (DUCIGS) and the John Hope Franklin Center as part of the 2020-2021 series: “John Hope Franklin | Global Anti-Racism (Histories of Action.)”

A Luta Continua (The Struggle Continues): Anti-Racism in South Africa and the US​​​​​​​