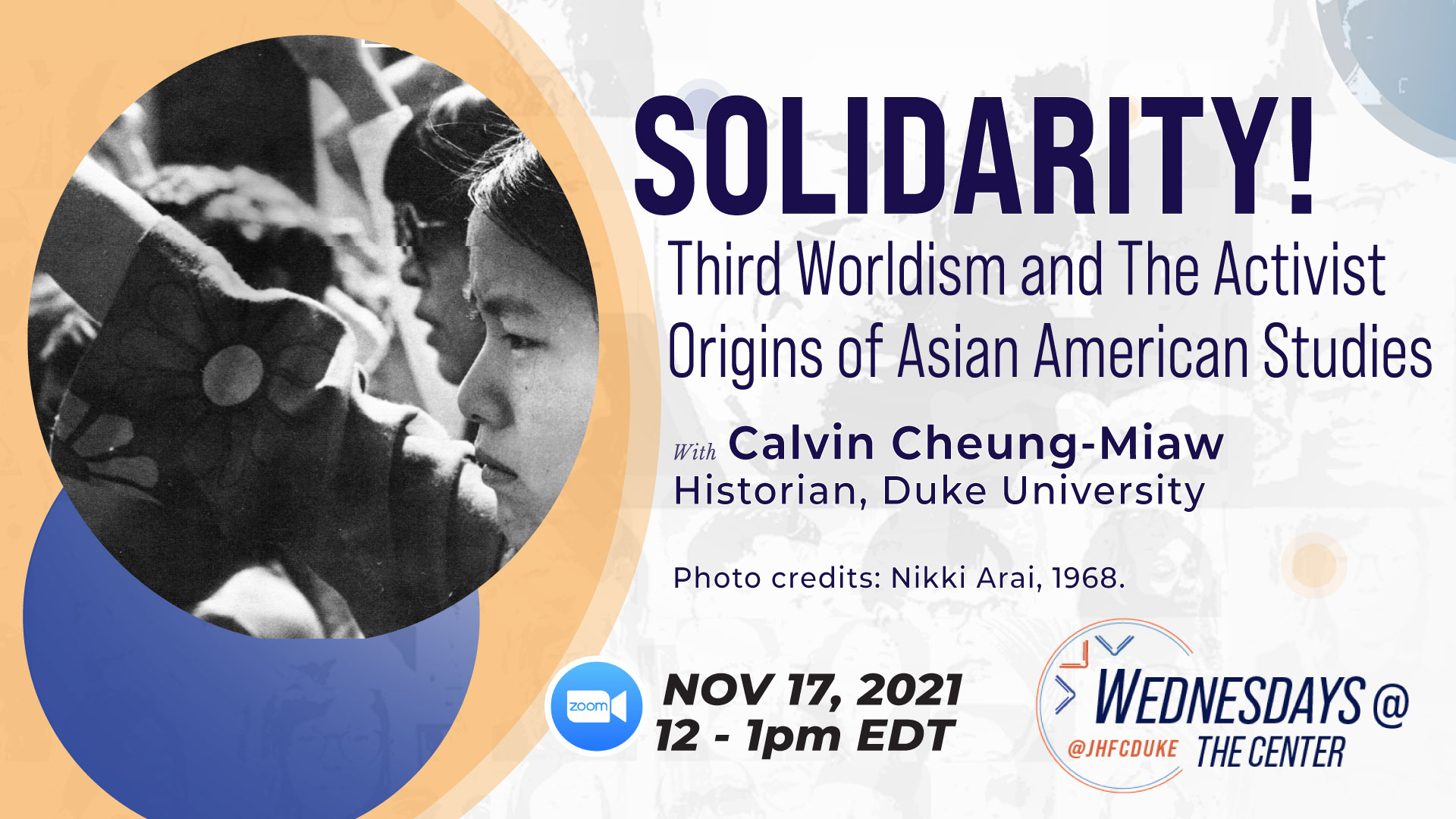 In a virtual Wednesdays at the Center event, Calvin Cheung-Miaw, Assistant Research Professor of History at Duke University, spoke on the activist origins of the Asian American identity, with a focus on how Asian Americans thought about multiethnic and multiracial solidarity in the 1960’s.

In his lecture, Cheung-Miaw traced the origins of the Asian American identity to college student activists in the Bay Area of California during the 1960’s, specifically in the shadow of the Vietnam War.

The term “Asian American” was coined in 1968 by University of California, Berkeley graduate student Yuji Ichioka, when he and his partner, Emma Gee, founded the Asian American Political Alliance (AAPA) on campus. Unlike other student groups for people of Asian descent, AAPA “championed Asian American identity as an explicit rejection of the stereotypes associated with the label ‘oriental’ and as a provocation to political action,” Cheung-Miaw explained.

AAPA closely aligned itself with the then-popular concept of third worldism, which in the American context, was “the idea that Asian Americans, African Americans, LatinX Americans, and Native American communities all confronted analogous, though not identical, situations of racial oppression and those communities were all engaged in parallel struggles for self-determination,” Cheung-Miaw explained.

Inspired by third worldism, AAPA brought people together not because of a shared ethnicity or cultural background, but a shared situation of racial oppression facing all Asians in the United States.

Cheung-Miaw argued that the brutality and racism the American military perpetuated against the Vietnamese during the Vietnam War helped to further create a sense of solidarity between Asian communities within the United States and abroad.

The talk, titled “Solidarity! Third Worldism and The Activist Origins of Asian American Studies,” was moderated by Esther Kim Lee, Professor in the Department of Theater Studies and the Director of Asian American & Diaspora Studies at Duke University.

This event was sponsored by Duke University's John Hope Franklin Center, the Duke University Center for International and Global Studies (DUCIGS), the Duke's Asian/Pacific Studies Center (APSI), and the Asian American and Diaspora Studies at Duke.