An Election in India is Raising Interest in North Carolina 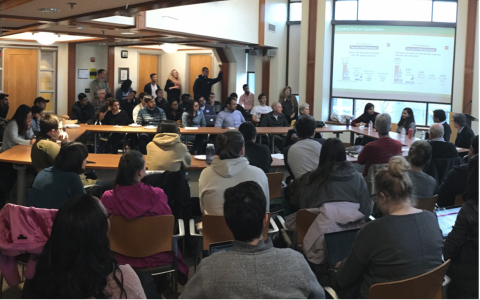 With a crucial national elections looming in India, and with Indian citizens able to vote from abroad for the first time in history, on April 2 Duke students from India provided their insights into the upcoming election.

In front of a SRO-audience in the Sanford School’s Rhodes Conference Room, Zanalda outlined the top candidates and the main election issues. Prime Minister Narendra Modi of the National Democratic Alliance (NDA) is the favored candidate in the election, with Rahul Gandhi of the Congress-led coalition as the leading opposition. Zanalda listed unemployment, national security, the undermining of democratic institutions, and social media abuses (or “fake news”) as the principal issues governing this election cycle.

Karthik explained that many Indians vote based on their emotional reaction to experiences rather than policy issues. She also pointed out that recent conflicts with Pakistan has “ignited the emotional flair of the elections."

In Patel’s view, the platforms of opposition candidates and parties have centered solely on the mantra of “Defeat Modi,” providing little to differentiate themselves from the incumbent candidate, who is running on a Hindu nationalist platform.

However, Sridhar said the Congress party’s recent manifesto of policy prescriptions may drive more support for Gandhi. The manifesto set goals to expand public sector jobs and employment. He added that social policy will be a crucial factor for many Indians.

The policy that allows Indians to vote from abroad may affect election results. Karthik characterized the vast majority of Indians abroad as belonging to the more financially well-off business class, a demographic that is “typically a vote bank” for Modi’s party.

Steve Rao, a senior council member of the city of Morrisville, NC, was in attendance said he sees more of a focus on this election than usual among the Indian American community in the Triangle area because of the new policy. “I’ve been getting a lot of Facebook event invitations to Modi watch parties,” he said.

Addressing the issue of interference in voting, Karthik said that her experience as a civil servant has helped solidify her confidence in the fairness of the voting process. “Where I work if there is ever an incident of anything going wrong, there's a revote,” Karthik said. “The systems for conducting elections are very robust."

Sridhar cautioned, however, that though the systems for voting may be strong, “people always talk about how a lot of people get paid off by certain parties to vote a certain way.”

The panelists also fielded questions from the audience on topics such as demonetization, Kashmir, the media, the industrial sector, and identity factors like religion.

Produced by POLIS, International House, and DUCIGS, this event was co-sponsored by the Duke India Initiative, Duke Diya, and the Sanford School of Public Policy.