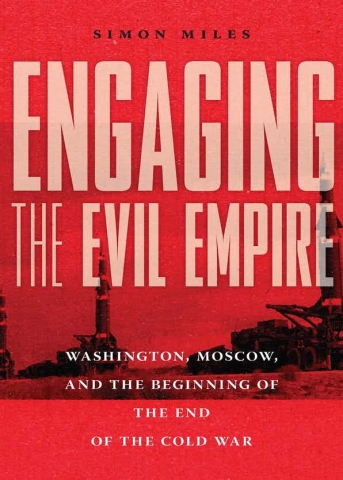 “We are at the dawn of what is becoming a golden era of scholarship on Reagan and the end of the Cold War,” noted Professor William Inboden, Executive Director and William Powers, Jr. Chair at the William P. Clements, Jr. Center for National Security at the University of Texas at Austin. A major contribution to this scholarship is a new book by Simon Miles, Assistant Professor in the Sanford School of Public Policy and the Departments of Slavic and Eurasian Studies and History at Duke.

On October 15, Miles presented a virtual launch of Engaging the Evil Empire: Washington, Moscow, and the Beginning of the End of the Cold War, a groundbreaking text that uses recently declassified archival materials from both sides of the Iron Curtain to reflect on the early and mid-1980s, finding new significance in events that were not readily apparent at the time. His research shows how shifts in the perceived distribution of power catalyzed changes in the strategies which U.S. leaders used to engage the Soviet Union and vice versa. Inboden, who was also Miles’ dissertation adviser during his PhD studies, remarked in his introduction that, “this book sets a new standard for a fresh, balanced, insightful take, especially on the critical years of 1984-1985.”

The origin of Miles’ book was a puzzle that has long perplexed scholars of international relations as well as historians: how did the leaders of the U.S.A. and U.S.S.R. transition from the depths of detente to putting aside their difference and finding grounds for cooperation? In retrospect, the end of the Cold War was a surprisingly fast process - moving from a Damoclean sword hanging over the world to a transformation of the international system that, heretofore, had only been brought about as a result of great power wars.

To address this question, Miles puts forward three major contentions. First, he believes the key to understanding the scope of end-of-decade changes lay in the beginning of the decade (1980-85). During that period, the Cold War balance of power shifted from one that was perceived to favor the U.S.S.R. to one that favored the U.S. The nature of the conflict also shifted from a ferocious war of words (which nevertheless included back-channel dialogue) backed by the implicit threat of force to very public summits and declarations of peaceful, cooperative intent.

Second, Miles noted that President Ronald Reagan implemented a dual-track strategy towards the U.S.S.R. There was the conventional track, “peace through strength,” favored by some of the more hawkish members of his administration. However, there was also a “quiet diplomacy” approach - secret back-channel negotiations designed to not only prevent conflict from boiling over but also building up diplomatic trust.

Finally, Miles’ research reveals that the U.S.S.R. also had a strategy of re-envisioning its engagement with the U.S. Moscow was not a passive actor during this period; it was not just “the Ronald Reagan Show.” In particular, Soviet military doctrine was one of using the space race - the “final frontier” - to buy time. As the country’s economic situation showed signs of critical deterioration, the leaders’ intent was to give the USSR the necessary breathing room to deal with domestic concerns that would, nevertheless, ultimately overwhelm the nation by the end of the decade.

The research supporting this book also speaks to the core of the structure versus agency debate. Miles, however, believes it is a false dichotomy. He contends that structure matters because it shapes the context, but the individual agency of key actors also matters because they take individual action. Using the example of Mikhail Gorbachev, Miles noted that it was not inevitable that Gorbachev made choices in 1985 to try and begin scoring diplomatic wins to both solidify his own domestic position (which was more precarious than was understood, both then and now). Gorbachev could have followed in the footsteps of Yuri Andropov instead of pursuing market liberalization reforms. Perestroika and Glasnost did not have to happen; they were made much more likely to happen by the realities in the U.S.S.R. at the time, but these policies also came about due to Gorbachev’s understanding of the actual political circumstances, both domestic and international.

On the question of agency, Gorbachev had the youth, flexibility, and correct outlook to take actions, such as diplomatic engagement with the U.S., toward which Andropov was also inclined but could not actually bring to fruition given that he was still a member of “the old guard.” Unlike his predecessors, however, Gorbachev did not have the burden of having lived through the dawn of WWII on Soviet soil (Operation Barbarossa) and was thus somewhat freer to chart a new course.

As the discussion continued, Miles touched on several of the key elements during this period of transition: the role of President Reagan and Soviet leaders, particularly Andrei Gromyko; internal disagreements over policy approaches on both sides of the Iron Curtain; the role of the Strategic Defense Initiative (SDI, also known as “Star Wars”); and the “Able Archer” crisis of 1983, the war game that nearly became a nuclear conflict.

None of this would have been possible without the massive trove of recently re-declassified archives. On the Soviet side, some of it was opened in the 1990s before again being closed by Boris Yeltsin, so many of these documents are just now re-entering the academic sphere. Interestingly, Miles obtained much of his material in Berlin, Prague, and Kiev, noting that the archives in these cities functioned like a back door. The Warsaw Pact was an inequitable arrangement among its members; many sensitive Soviet documents have been (interestingly) declassified on the recipient end (East Germany, Romania, Czech Republic, Ukraine). Through these archives, Miles noted, scholars can get an amazing picture of what was going on in Moscow at the time. In Berlin, there was a treasure trove of secret back-channel negotiations between Arthur Burns and Soviet ambassadors in East Germany — as co-administrators of Berlin, they all had a pretext to meet. Miles found instances where Burns explicitly stated that Reagan wanted to open a quiet channel of diplomacy and dialogue. For the most part, these documents are only available to scholars now because the East Germans obtained copies of Soviet materials and translated them from Russian to German.

After the main presentation, a lively Q&A concluded with one audience member’s inquiry of whether Miles’ research could shed light on US-Russia relations today. Miles responded that understanding the end of the Cold War requires acknowledging the philosophy that, “the strong do what they can, the weak do what they must.” President Reagan entered office believing that the U.S.S.R. was actually ahead of the U.S. and was quite pessimistic about American standing in the world. It is important to recall that this is the lived experience of current Russian leaders, and Miles contends, is arguably the driving rationale of Russian grand strategy today.

The event moderator, William Inboden, is the Executive Director and William Powers, Jr. Chair at the Clements Center for National Security and Associate Professor in the University of Texas at Austin’s Lyndon B. Johnson School of Public Affairs. This online book launch was organized by the DUCIGS/Rethinking Diplomacy Program with support from the Duke Program in American Grand Strategy and Duke Sanford School of Public Policy.

You can watch a recording of the event here: