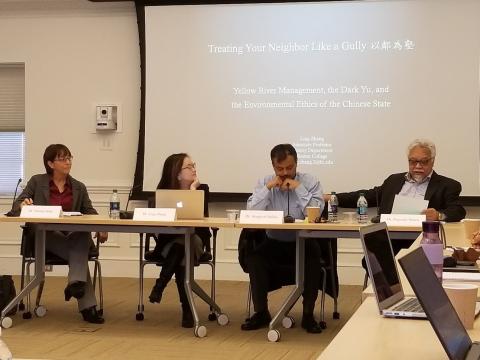 The workshop Six Rivers in Historical Time included six papers about the human-nature relationships on six Asian rivers originating from the Himalayas in pre-modern and modern periods. The speakers analyzed how people adapted to and utilized the rivers, and how the riverine communities being shaped and reshaped by the rivers in various perspectives.

Drs. Ling Zhang and Yan Gao focused on two major rivers in China and how their fates have intertwined with politics. Ling Zhang’s paper stressed the limited function of the states through her interpretation of Mencius’ critique of “treating your neighbors as gully,” questioning that by constantly shifting problems to others and transferring them to the recipients of harms, we are facing a kind of ethical crisis in the process of solving ecological issues. Yan Gao revealed a complex picture of how the waterway transportation networks were shaped by social and ecological agencies jointly in late imperial Central China. She emphasized the social and environmental impacts brought by the ten-year Yangtze waterways’ blockade on the middle Yangtze region and the significance of local communities in managing unpredictable situations.

The studies on the Ganges, Brahmaputra, and Mekong River elaborated more about the local riverine communities. Dr. Saikia discussed the life of gold washers, fishermen, boatmen along the Brahmaputra River and the intimacy developed between the river and its people’s livelihood and their mutual influences. Dr. Singh analyzed how the development modern laws of India interacted with the morphological conditions of the Ganges River and how such socio-ecological entanglements had transformed the entire mid-Ganga region. Dr. Gilmartin shed light on how the Indus basin became one of the most heavily engineered in the world through the interconnection of political powers and their physical environment. He pointed out two major turning points in the river-people relationships in the Indus basin: the British colonial vision of a scientific empire and the influence of the Indian and Pakistani nation-states.

Dr. Stark shared her fascinating archeological project about the Angkorian worlds at the workshop. She discussed the life along the Mekong River during 6th-8thcentury CE. Interestingly, while the everyday life was shaped by the Mekong river ecology, the pre-Angkorian riverine communities developed a bottom-up system of the river management, and they gained some regional autonomy by providing some goods to the political capital. During her talk, she emphasized the climatic and ecological factors in the collapse of Angkor and signs of resilience from local communities.

The audience was engaged in the talks and discussions. Issues explored further during the discussions include the effects of the global climatic patterns on the rivers and their communities, alternative strategies in water management, environmental ethics, elements of local sustainability, and concepts such as social metabolism in understanding ecological crisis.

Video Recording of the Workshop

Blood and Water in the Indus Basin with David Gilmartin:
https://youtu.be/IShGvNOjFO0(link is external)

Flood, Avulsion and Governance: The Ganga river in Nineteenth Century with Vipul Singh:
https://youtu.be/7djOUJcXt-k(link is external)

Premodern Khmers and their Mekong: Ecology and Agency in Archaeological Perspective with Miriam Stark:
https://youtu.be/3pHkKahv2bM(link is external)

Gold washers, Fishermen, and Boatmen: Was there a pre-modern life of the Brahmaputra? With Arupjyoti Saikia:
https://youtu.be/P5Ib1Tgtm8A