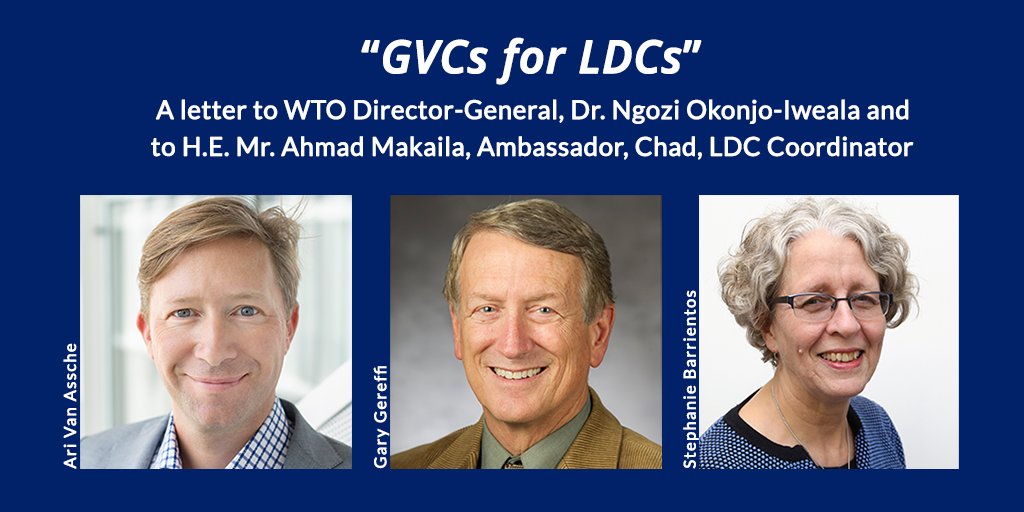 The WTO is approaching the final preparations for the 12th WTO Ministerial meeting that will take place in Geneva this December, a critical point for Members to reinvigorate this institution. Among the many critical matters on the agenda is the development of a new and meaningful contribution to the 10-year programme of action for Least Developed Countries (LDCs) that can make trade and the trading system a better instrument for LDC inclusion. Building on the reality of global value chains (GVC), we write to respectfully encourage you to consider a new “GVCs for LDCs” initiative that fits this goal, and to encourage a discussion among WTO Members at the upcoming Ministerial meeting, with a view to its subsequent adoption.

The ministerial meeting comes at a critical juncture. The poorest countries in the world and their 880 million people need support from the multilateral trading system to enable them to overcome structural challenges, eradicate poverty, achieve internationally agreed development goals and enable graduation from the LDC category. This is particularly urgent as the Covid-19 pandemic has hit LDCs disproportionately hard. The economic crisis caused by the pandemic has pushed more than 100 million people into extreme poverty, mainly in LDCs in South Asia and sub-Saharan Africa. According to a recent UNCTAD report, all but four LDCs “will likely experience a fall in their average income” and “the current account deficit of LDCs is forecast to widen from $41 billion (or 3.8% of their collective GDP) in 2019 to $61 billion (or 5.6% of their GDP) in 2020, the highest value ever.” According to a UN Study, “The COVID-19 pandemic not only threatens to throw LDCs back many years in achieving SDGs on poverty, hunger, health and education, but it also exacerbates inequalities, further jeopardizing the achievement of SDG5 on gender equality and women’s empowerment and SDG10 on reducing inequalities” (p. 16).

The “GVC for LDCs” initiative promises to provide a real boost to LDCs’ inclusion in the global trading system. Under this initiative, WTO members would complement existing preferential schemes based on “direct” LDC exports with a multilateral scheme that would extend a proportional duty-free treatment to the LDC value-added that is incorporated in exports across the globe. Hence, LDC value-added exports will remain duty-free throughout their journey along global and regional value chains, thus fitting the “Made in the World” logic that the WTO has been advocating for the past decade. The scheme will rely on the existing customs procedures and documentation (e.g.,certificates of origin) that are now used by LDCs to benefit from the current schemes. The “GVCs for LDCs initiative can be implemented with minimum administrative requirements, utilizing and extending current documents across GVCs, beyond their current use for direct exports from LDCs.

For instance, consider the case of tropical fruits (e.g., mangos) exported by LDCs. Currently, such products are offered duty-free and quota-free in certain preferential schemes for LDCs (e.g., the EU’s Everything but Arms program). As such, nothing can be done to offer additional preferential market access for LDC exports of tropical fruits to Europe or any other country with an “EBA-like” scheme. But if the LDC tropical fruit is embedded in a third country’s processed-food export (e.g., yoghurt or ice cream) which faces a 15% most-favoured-nation tariff in another third country, the LDC mangos are also indirectly subject to the 15% tariff. Under the “GVCs for LDCs” initiative, the LDC tropical fruit local content value will be deducted from the dutiable value of the processed food items, leading to an increase in trade and a boost to LDCs exports of mangos along the supply chain. A similar positive trade effect would arise for non-agricultural products (e.g., copper, aluminium, cotton) and manufacturing products (e.g., apparel and textiles).

In the backdrop of paragraph 276 in the latest Draft Doha Programme of Actions for LDCs, the Initiative can also be extended to graduating and graduated LDCs such as Bangladesh, Lao People’s Democratic Republic, Myanmar and Vanuatu, which still will need support to further integrate into the global trading system and to make their graduation sustainable and irreversible.

There are several reasons why we are promoting the “GVCs for LDCs” initiative in the buildup to the 12th WTO Ministerial meeting. First, it would offer firms and workers in LDCs needed additional support to participate in global trade. Second, it would encourage GVC lead firms to consider LDC suppliers and workers more seriously as they choose their GVC partners. This stems from the fact that LDCs will face a significant increase in the global demand for “made in LDC” intermediate inputs that confer a preferential tariff margin to third-country downstream products,and consequently a price premium for LDC- originating intermediates. The “GVCs for LDCs” initiative thereforeoffers the real prospect of helping least-developed countries graduate from LDC status. It can foster substantive economic, social, and environmental upgrading in LDCs, especially if combined with multinational firm measures to promote social and environmental standards throughout their GVCs.

In a recent article published also as an op-ed by the Executive Secretariat for the Enhanced Integrated Framework at the WTO, Antimiani and Cernat have estimated that the “GVCs for LDCs” initiative will increase the value added embodied in LDC exports by more than US$5 billion on an annual basis, with textiles, metal products and other primary goods showing the biggest gains. On average, LDCs would see their domestic value-added content in exports increase by 2 percent and move away from excessive specialization in agri-food production towards the supply of intermediate inputs for a wide range of manufacturing sectors.

We seek to highlight the “win-win” nature of this proposal, an important element in the political economy of WTO deliberations. Given that the initiative facilitates exports of third countries that incorporate products from LDCs in their supply chains, the increase in LDC exports has broad benefits: all WTO members stand to gain, especially other developing economies.

In sum, we hope the WTO can give serious consideration to our proposal that is critically important for LDCs and their development prospects, and which has received the support of 38 leading experts on GVCs, trade and international development across the globe. We remain at your disposal should you, the WTO secretariat, the LDC group, or WTO member countries wish to engage in a follow-up exchange or presentation on the practical implementation aspects of this “GVCs for LDCs” proposal.

Peter Draper, Professor and Interim Head, School of Economics and Public Policy and Executive Director of Institute for International Trade, The University of Adelaide, Australia

Chair of the WTO Sub-Committee for LDCs, Ambassador Monique T.G. Van Daalen of the Netherlands

Ambassador and Permanent Representative from the Republic of Vanuatu