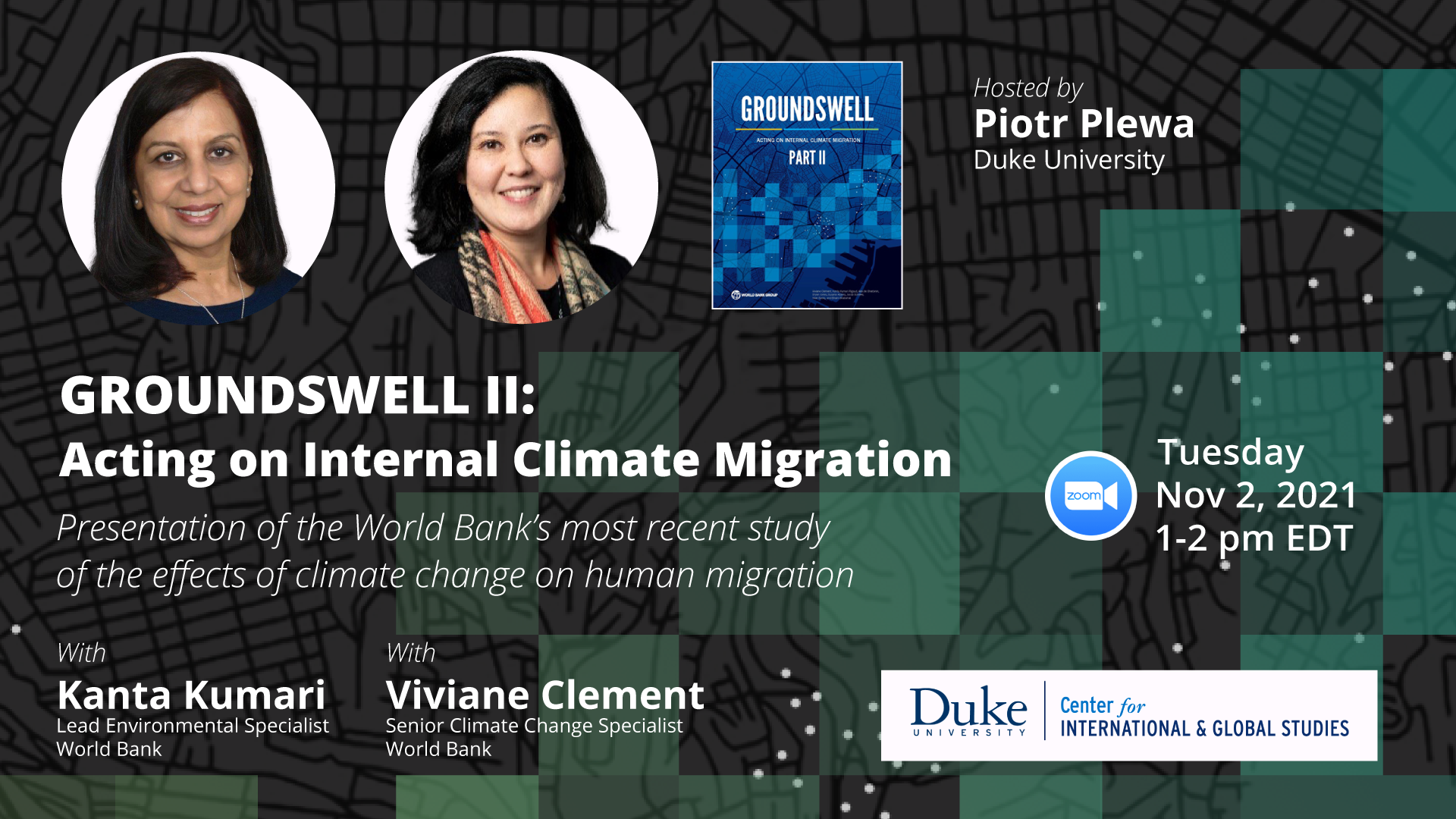 The recent Groundswell report by the World Bank predicts that between 44 and 216 million people could migrate within the borders of their countries in the context of slow-onsetting climate change by 2050. Most movements will occur in Africa and East Asia and the Pacific.

“It is the poorest and the most vulnerable areas that will be hit, but no region or country will be totally immune,” said Kanta Kumari Rigaud, World Bank’s Lead Environmental Specialist and Regional Climate Change Coordinator in the Africa Region, at the recent event: “Groundswell II: Acting on Internal Climate Migration,” organized by the Duke Center for International and Global Studies (DUCIGS).

To discuss the landmark report and its findings, Duke University Scholar Piotr Plewa* invited two lead authors of the report, Dr. Kumari and Dr. Viviane Clement, a Senior Climate Change Specialist in the Climate Change Group of the World Bank.

At the event, Kumari and Clement illustrated the model-based approach of the report, which projected how climate change will affect water availability, crop productivity and sea levels. Due to the difficulty of predicting climate change and population movements, the study suggested low and high estimates.

“The report was very painstakingly done” with geographers from the Earth Institute at Columbia University, demographers from the CUNY Institute of Demographic Research and Climate Scientists from the Boston Institute, Kumari said. The study ran the models in 14 km grid cells, trying to predict water and crop reduction and consequent demographic impacts at the local level and aggregating them at the regional and national level.

The results showed both the potency of climate change as a driver of mobility but also the potential of policy interventions. “The consistent message that comes across,” Kumari said, is that cutting emissions and pursuing more “climate-friendly” development pathways “will bring about a reduction of climate migrants, as high as 80% in the best scenario.”

The report also examined the effects of climate change on migration in rural, urban and coastal areas. The three subregions investigated by Groundswell II—Sub-North Africa, the lower Mekong region, and Central Asia—will all be affected in different ways by an intensification of water scarcity, rising sea levels and diminished crop productivity by 2030, Clement said, and key policy interventions should be “tailored from the bottom up” for each these hotspots, either to manage water resources, to embed climate resilience in urban planning, or to support the livelihood of rural areas (or combinations of all the above.)

It’s not only imperative to cut emissions, Clement said, but also “to integrate climate migration into far-sighted, green, resilient and inclusive development planning.”

Among the far-sighted courses of actions, Kumari suggested that helping these populations “adapt in place” won’t likely be enough. Particularly in the case of Sub-Saharan Africa and some parts of Asia, where we will see a continued increase in population mobility over the next decades, “trying to sustain livelihoods and populations in some climate-sensitive sectors may not be totally viable,” she said. What we need, she concluded, is to turn migration into an “economic and demographic dividend,” and “harness climate migration for jobs and economic transitions.”

The World Bank Groundswell report, with its granular look at the local climate stressors for migration, will provide the analytical resources that will enable local communities catch “the window of opportunity” for “resilient, green, clean, and inclusive” development, Kumari said.