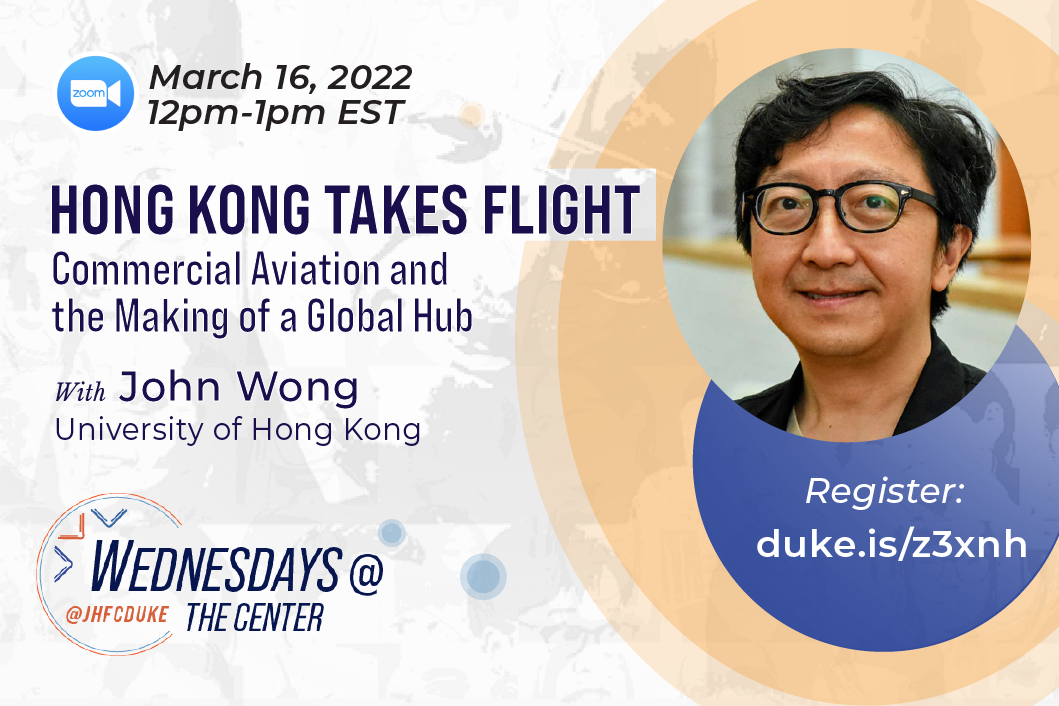 In an online talk based in a state that claims to be “first in flight,” John Wong, Associate Professor at the University of Hong Kong, took a lunchtime audience on a tour of Hong Kong’s globalization through the prism of its airline industry. Wong contends that the city’s development into a regional and global hub was not preordained. Rather, it was the product of deliberate choices by several key stakeholders to transform the city into an innovation hub while simultaneously weaving it into a nexus point of emerging transnational infrastructure. Over the course of his presentation, Prof. Wong would show how Hong Kong's political and economic development reflected the structure and institutions of its commercial aviation industry and how, in turn, industry influenced and facilitated the city’s development into a hub, against the backdrop of a reconfiguring global network.

Beginning in the 1930s, the global aviation industry was only starting to take off, and early commercial planes required more frequent fuel stops. Hong Kong’s unique location made it ideal for companies seeking to develop transit points for travelers moving between Europe and its colonies in Southeast Asia as well as anyone heading from mainland China to the southern territories of Australia and New Zealand.

It is crucial to recall that these routes were essential means of facilitating connections. Not only did airplanes physically transport people over long distances, they played a crucial role in speeding up the flow of information between far-flung locales by carrying mail at speeds far greater than had been possible by land or sea. Hong Kong’s leaders envisioned the city becoming as critical a link in the emerging global network, thought of in the same space as London, New York, and San Francisco.

At the time, Hong Kong was still contractually a British colony, making it attractive to American interests as well as positioning the city to serve as China’s outlet to the western world. After World War II, as the region sought to rebuild from devastating losses, Prof. Wong showed a 1946 report wherein British officials called Hong Kong a most important link in the network of postwar aviation.

Over the ensuing decades, the development of larger jet airplanes that could cover longer distances required even larger runways for takeoff and landing. As Prof. Wong pointed out, “Cathay Pacific emerged as Hong Kong’s airline to operate in a decolonizing zone that came to be reformulated as Southeast Asia. Slowly but surely, traffic grew. Cold War dynamics rejuvenated commercial air flows through Hong Kong by the mid-1950s, and continued to propel the flow of traffic.”

The 1960s and 1970s saw the rise of potential competitors in Taiwan, Japan, and Singapore. Cathay Pacific struggled to distinguish its brand, turning to the uniforms of its cabin crew. Prof. Wong showed a series of images reflecting the evolution of the air hostesses’ clothing. What began as military-inspired gear shifted to an ensemble highlighting the airline’s Chinese heritage then to a more cosmopolitan look. In 1969, the year of the moon landing, Cathay Pacific introduced a more utilitarian uniform emphasizing functionality: “hostesses, like astronauts, need the right type of clothing for flexibility and mobility.” In the 1980s, the airlines began hiring coture designers such as Pierre Balmain.

Prof. Wong noted, “The fashion icons that Cathay Pacific presented in each era signify the positioning of the airline, as well as the city it represented in the region and in the world of commercial aviation.” However, this was only part of the strategy. He continued, “The airline was trying to make the best of all worlds, with local sensitivities of Hong Kong and the region” alongside “European know-how, expertise, and technical reliability” combined with “other western elements renowned for their cultural distinction.” Cabin crews were not only “the prettiest faces of nine exotic lands,” he emphasized, “these prettiest faces of Cathay Pacific spoke 23 languages,” including English, accentuating the airline’s assertion of its local awareness.

Airline deregulation coincided with the development of even larger planes, such as the Boeing 747 jumbo jet, that could cover longer distances, reducing the need to negotiate landing rights and transit points. Fortunately for Hong Kong, Prof. Wong stressed that “it was already an over-performing colony in a waning imperial network,” so it was able to independently fund the critical expansion of its airport infrastructure at a time when this was sorely needed.

The final layover on Prof. Wong’s high-speed tour of the history of commercial aviation and Hong Kong’s development was the 1997 transition of the city from British colony to Chinese control. The decade leading up to this major administrative shift saw a flurry of economic activity among major financial institutions around the world, including Swire, HSBC, and Citic Pacific. In retrospect, he concludes, “the handover of 1997 might have seemed smooth, but it was only possible through calibrated shareholder realignment and deliberate boardroom maneuvers.” Prof. Wong believes that the historical observations tracing Hong Kong’s rise into an aviation and commercial hub remain instructive today as the city works to reconfigure its centrality in a world of rerouting traffic.

Wednesdays at the Center is a series of Duke University’s John Hope Franklin Center and the Duke Center for International and Global Studies (DUCIGS).

This event was co-sponsored by the Asian Pacific Studies Institute at Duke and the Global Asia Initiative.