This article appeared in the Duke Chronicle on Tuesday November 7, 2017 (LINK) 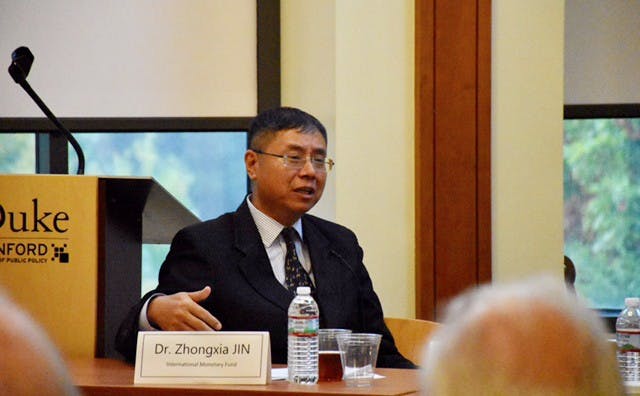 Photo by Xinchen Li | The Chronicle

The executive director for China at the International Monetary Fund discussed the importance of governmental mitigation and marketization in China's efforts to internationalize its financial sector at a seminar Tuesday.

“China has made great achievements in liberalizing its financial sector,” Jin said. “But there is still a long way to go before it is fully internationalized.”

The Chinese government’s regulation of its financial market is both legitimate and appropriate, Jin said in response to a widely-held belief in the United States that China has deliberately undervalued the renminbi, causing high unemployment in the US manufacturing sector.

Jin explained that China has reduced its exchange rate to maintain its manufacturing competitiveness. Meanwhile, the United States, has kept its interest rate low and attracted large capital inflow, increasing the U.S. dollar relative to the renminbi. Job losses in the U.S. manufacturing sector are largely a result of a natural economic structural upgrade, Jin said.

“It is common for developed countries to shift their dependence on low-end manufacturing to high-end manufacturing and service sectors,” Jin said. “In the United States, unemployment in the first sector is usually accompanied by higher employment rates in the latter two.”

Jin added that China has made great efforts to stabilize the value of the renminbi because the country wants to increase its credibility as an international currency.

The IMF added the renminbi to the Special Drawing Rights Basket (SDR) in September 2016. The SDR is an international reserve asset that supplements its member countries’ official reserves with reliable currencies, other than gold and the US dollar.

A currency is considered reliable only when its host country has a high level of exports, establishes operational standards over exchanging its currency on the foreign market and allows free and wide use of its currency, Jin said.

“The inclusion of the renminbi into the SDR is truly a milestone for China to internationalize its currency, but it’s only one of the first steps,” Jin said.

He added that China has significantly enlarged its financial sector in the past decade and become a global leader regarding the size of its banking sector, stock market and credit card market.

Despite the large size of China’s financial sector, it is still relatively close to the international market, Jin said. For example, though China’s banking sector is the largest in the world, foreign banks only account for about one percent of the total assets in its banking sector.

China has gradually shifted its focus from the mere expansion to the liberalization and internationalization of its financial sector, Jin added. It has adopted measures such as diversifying the roles of commercial banks, opening up to foreign stock investors and loosening governmental control over the interest rate.

Jin acknowledged that many are concerned that an increasing capitalization and liberalization of its financial sector will undercut China’s ability to handle potential crises, like what the United States experienced during the subprime mortgage crisis in 2008. But he said such a worry is exaggerated.

China has been maintaining a low public debt rate, Jin said. In fact, China’s total leverage ratio, the percentage of capital that comes in the form of debt or loans, is lower than France's.

“Nobody is concerned about a debt issue in France—France is actually considered as one of the best performers in the Eurozone,” Jin said. “Then why should you worry about China?”

Attendees shared their reflections upon the event.

Lin Zhao, second year economics master student who attended the talk, said as a Chinese native, he found Jin’s talk to be timely. He thought that Jin incorporated the latest financial policies in his presentation in an effective way, including the ones raised on the 19th National Congress of the Communist Party of China, which closed about two weeks ago.

Another attendee Schuyler Knowles, operations coordinator at Duke's office of Global Administrative and Travel Support, said he is amazed at the changes China has made to take a greater leadership role in the world economy.

“Of course the Chinese government intends to control [the financial sector],” Knowles said. “But it is interesting to see how open they are in many ways.”