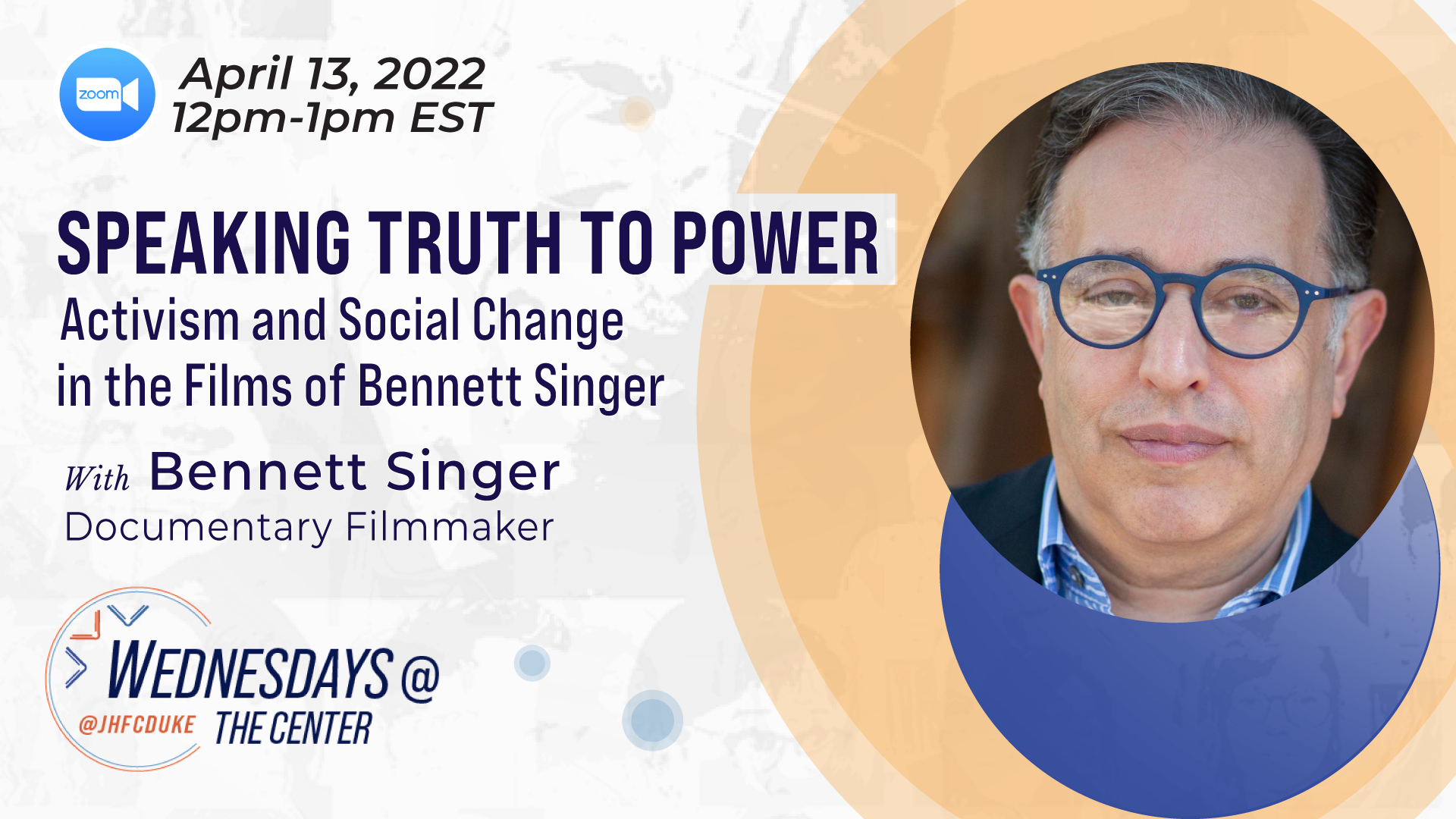 Award-winning filmmaker Bennett Singer shared clips and stories from his illustrious career during a virtual Wednesdays at the Center presentation on April 13, 2022.

Singer, whose filmography includes Eyes on the Prize, a 14-hour PBS documentary on the civil rights movement, Brother Outsider: The Life of Bayard Rustin, and most recently CURED, a film about the struggle to remove homosexuality from the American Psychiatric Association’s list of mental disorders, was joined in conversation by DUCIGS Director Giovanni Zanalda and Nishani Frazier, DUCIGS Visiting Scholar and Associate Professor of History at the University of Kansas.

During his one-hour lecture, Singer shared clips from Brother Outsider and CURED, recounting the incredible life stories of his activist subjects and the delicate decision-making that goes into retelling these important tales.

Brother Outsider highlights the life and work of Bayard Rustin, a visionary strategist and activist who has been called “the unknown hero” of the American civil rights movement. A disciple of Gandhi, Rustin was instrumental in bringing Gandhi’s principle of nonviolence from India to America. He went on to become a mentor to Martin Luther King, Jr. and served as the chief organizer of the 1963 March on Washington.

“Through it all,” Singer said, “Ruston dared to live as an out gay man, which was truly a radical act, and I think one that reflected his insistence of speaking truth to power in both his personal and political lives.”

The subjects of CURED drew inspiration from Ruston’s 1963 March on Washington when they stormed the American Psychiatric Association’s 1970 annual conference in San Francisco. In an effort to have homosexuality removed from the APA’s list of mental disorders, protestors and activists formed human chains, disrupted conference panels, and took over microphones, giving LGBTQ voices a platform in the conversations about their lives.

Looking back on these two films, Singer reflected that, “part of being an activist is about bearing witness, staking out the moral high ground, and being willing to accept the consequences.” He went on to express, “All of us have the potential to be activists. There are so many forms of activism, so many ways to make a difference.”

At the start of the event, Singer shared a deeply personal memory of a conversation he had as a child with John Hope Franklin which has helped to shape the course of his life and career.

Growing up in Chicago, Singer was given the opportunity to interview Dr. Franklin through his father, who knew Dr. Franklin from his work with the NAACP Legal Defense Fund.

Singer warmly recalled his interaction with Dr. Franklin, who graciously and engagingly answered questions about his work from the 12-year-old Singer, as a changing point in his life.

“That conversation, which has stuck with me for decades, really did help to ignite my interest in history and my interest in understanding how lessons from history can guide our present-day decisions and actions,” Singer said. “In some ways, I want to thank John Hope Franklin for making it possible for me to make these films and to be here today.”

This event was co-sponsored by the Duke University Center for International and Global Studies and the John Hope Franklin Center.