A Duke scholar highlights the prominence of Black Muslim artists in the Black Arts Movement. 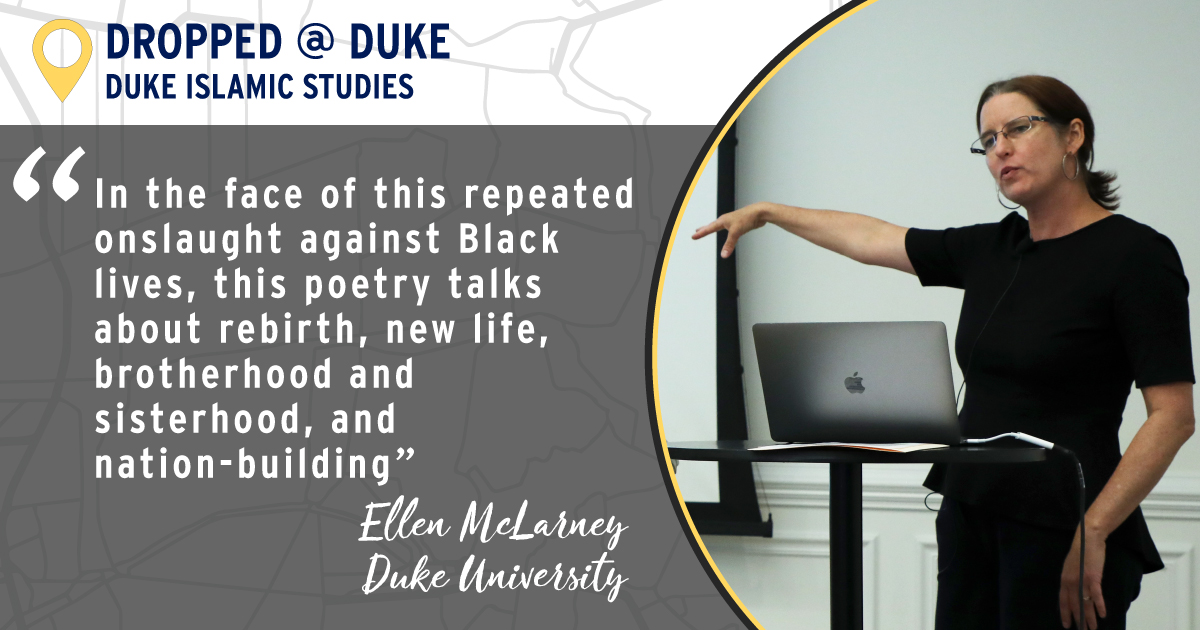 “Interestingly, people think of Muslims as against art and music,” said McLarney, “This project challenges that assumption.” McLarney is a professor in Duke’s Department of Asian and Middle Eastern Studies and the Department of Gender, Feminism, and Sexuality Studies. Her recent research focuses on Black Muslims, and she teaches a popular course on the topic.

McLarney positioned her lecture in the late 1950s through the 1970s during the heart of the Civil Rights era, the Black Power revolution, and the Black Arts Movement. She noted a rise in public awareness of The Nation of Islam from a famous Mike Wallace PBS documentary, “The Hate that Hate Produced.” The film feature Malcolm X for the first time in a national forum.

During this period of history, several artists in the Black Arts Movement converted to Islam. These artists took Muslim names, and the nature of their work shifted to reflect Islamic beliefs. Perhaps most famously, the poet and playwright LeRoi Jones converted to Islam after the assassination of Malcolm X in 1965 and took the name, Amiri Baraka.

As a Muslim, Baraka created his famous play, A Black Mass, which tells the story of a Black scientist, Yakub, who breeds the white race through eugenics. McLarney notes that this play and the Yakub story draws a lot of criticism towards the Nation of Islam, but she sees the play as a dramatized allegory which is reflective of the period. 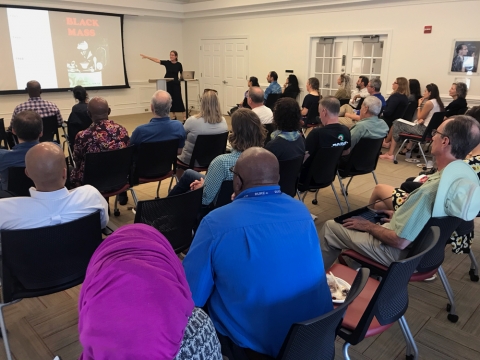 McLarney outlined the works of Baraka, as well as, other artist-converts- Sonia Sanchez, Yusef Iman, and Marvin X. She read excerpts from Iman’s poem, “Love Your Enemy,” which evokes images of reclaiming language, reclaiming religion, and reclaiming land. She also read from Sanchez’s poem “Malcolm,” which mirror images from Malcolm X’s Who Taught You to Hate Yourself speech.

“The Nation of Islam accrues charges of violence, anti-Semitism, and misogyny, but if you look at their writings, they actually talk about self-defense in the face of genocide,” said McLarney, “In the face of this repeated onslaught against Black lives, this poetry talks about rebirth, new life, brotherhood and sisterhood, and nation-building.”

McLarney’s lecture was part of the John Hope Franklin Center’s Wednesdays at the Center series and was made possible by the Duke Islamic Studies Center and the Duke University Middle East Studies Center.

The Wednesdays at the Center series is a free, weekly public lecture held every Wednesday at noon in the Ahmadieh Family Conference Hall in the John Hope Franklin Center (2204 Erwin Road, Room 240).