This article was originally published in Duke Today on October 18, 2019 (Link). 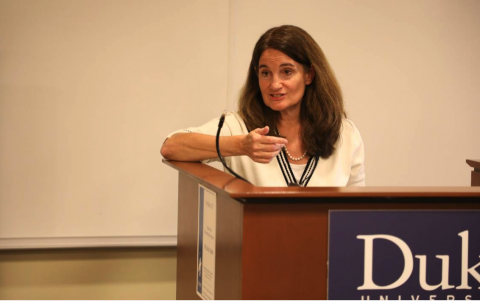 Elizabeth Economy, director for Asia studies at the Council on Foreign Relations, speaks at Duke. Photo by Catherine Angst

Look no further than the recent flare up between the NBA and China for a snapshot of Chinese politics today.

After Houston Rockets general manager Daryl Morey tweeted an image with the message “fight for freedom, stand with Hong Kong,” Chinese companies enacted a media boycott of the NBA and pulled sponsorships in a market worth $4 billion a year for the league. U.S. politicians blasted the moves – and the NBA’s initial hesitant response.

The fallout provides “important lessons on how the Chinese party state deals with its people, how it deals with its companies, and what the impact of the growing role of China on the global stage may be in terms of its exports and export of its values,” said Elizabeth Economy, director for Asia studies at the Council on Foreign Relations and a distinguished visiting fellow at Stanford University's Hoover Institution. Economy spoke about the future of US-China relations Monday during a talk at Duke.

The incident also reveals what China expects from others and “how the United States is going to balance its trade and interests in China with its own set of political values,” Economy said.

Since coming to power in 2012, China’s President Xi Jinping has reasserted the communist party, moved the country from a consensus-based system to one-man rule and adopted a more ambitious foreign policy, Economy noted. She called Xi the “most powerful Chinese leader since Mao Zedong.”

Xi also boosted surveillance of Chinese citizens with some 200 million facial recognition cameras and a goal of 600 million cameras next year that will also include gait and voice recognition, she said.

More than 600,000 people in China were detained last year for alleged corruption, about 100,000 more than in 2017, she said. One study estimated some 40 percent were Xi’s political adversaries, according to Economy.

But the return to a more hardline governance is not without opposition, she added.

“Institutional power does not always equate with legitimacy. (There are) pretty deep pockets of discontent” among liberal intellectuals, entrepreneurs, environmentalists and the LBGQ community, Economy said.

“Many think he has probably gone too far. We don’t know everything that’s going on, the system remains very opaque.”

Economy also shared insights on the effects of the trade war between China and the United States. China has cited the economic hit from the conflict as a reason for pulling back on environmental improvements such as curbing its notorious air pollution.

China has also added courts and fines to appease foreign complaints about intellectual property theft, though companies and governments in the West do not think it has done enough, she said.

Despite the limitations on free speech, Economy said she’s not aware of it hampering classroom discussions on university campuses connected to Western schools, including campuses affiliated with Duke, Johns Hopkins and NYU.

“Will that continue? It will probably continue until some type of threat emanates from a student or professor at one of these universities, and then the action will be immediate and overblown,” she said.

She also praised the benefits of Chinese students attending U.S. colleges and universities.

“Just by spending time here we’ve got 300,000 ambassadors for the United States’ way of life,” she said.

Economy added that other countries should not cut off relations with China despite questionable practices.

“We still need to engage with China and we need to find areas of common purpose and common ground,” she said. “We don’t want relationships to fray beyond the point of repair.”