Here, Plewa provides context and data about the migration trends in Central and South America. 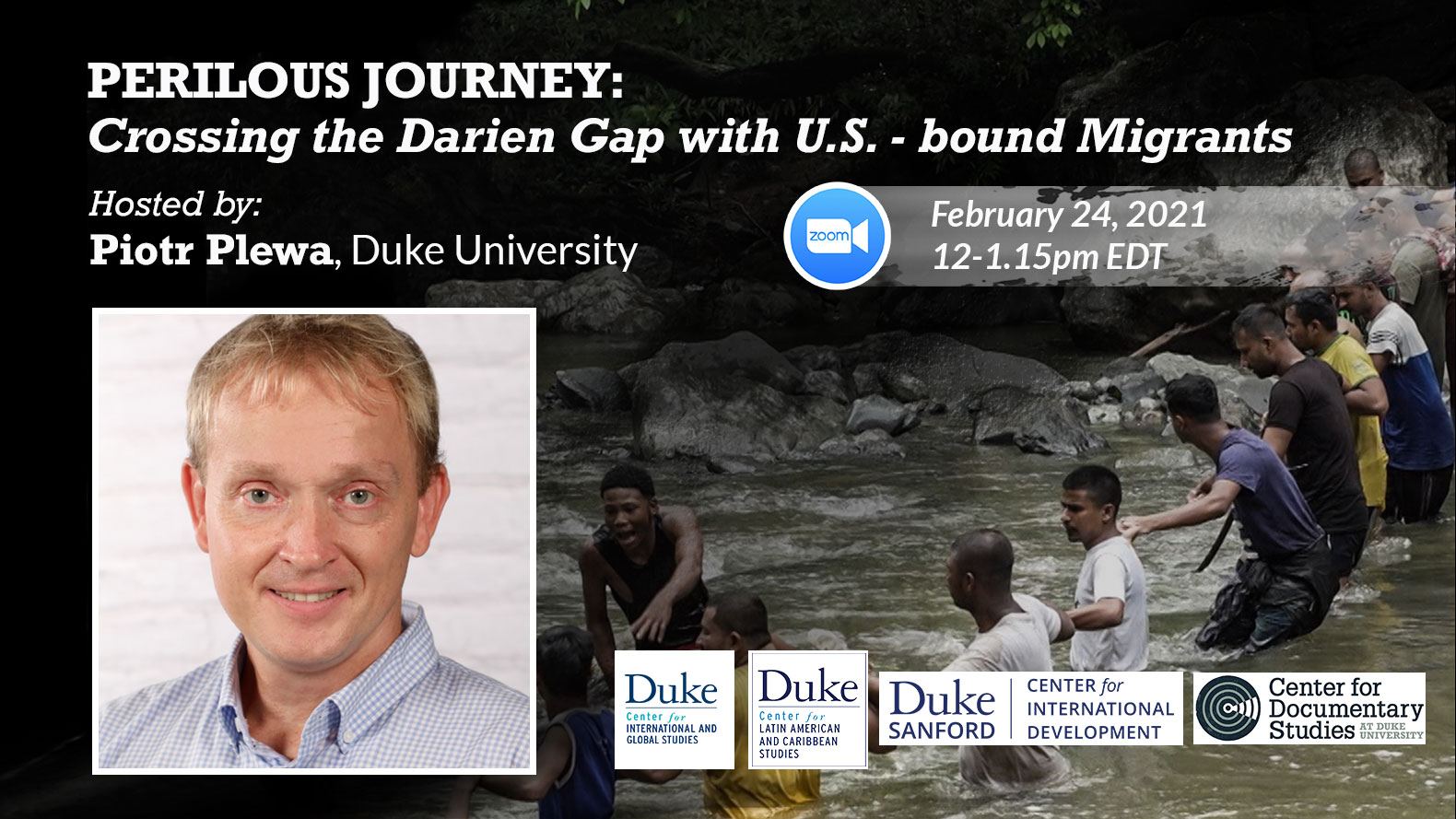 WHAT HAVE BEEN MIGRATION TRENDS THROUGH THE DARIEN GAP AND WHAT DO THEY MEAN FOR REGIONAL COOPERATION ON MIGRATION?

Darien Gap is a 66 miles-long swath of jungle connecting Colombia and Panama and thus South and North America.  It is an untamed wilderness where nature and occasional outlaws rule. Crocodiles lurk in rivers, fer-de-lance vipers slither across undergrowth and gun-wielding opportunists await an opportunity to strip passersby off their valuables. Fleeing much harsher conditions in their communities of origin migrants have become increasingly more frequent Darien Gap passersby.

As the US began to externalize its border migration control to Central America, the Gap became an important transit point for the Caribbean, Asian and African migrants heading for the US. Eclipsed by the Venezuelan migration crisis, the flow of migrants through the Darien Gap attracted scant attention. But persisting migration through the Darien Gap is a litmus test of another potential humanitarian crisis in the region – this associated with the economic and political malaise of Cuba and Haiti.

Who migrates through El Darien and why?

Roughly three-fourths of migrants who crossed Panamanian border with Colombia since 2010 consisted of Cubans and Haitians (figures 1 and 2). The numbers of Nepalese, Indian and Bangladeshi (and to a lesser extent Congolese, Eritrean and Cameroonian) nationals increased throughout the period. But non-Caribbean flows have slowed down as a result of stricter migration regulations in Latin America already prior to the pandemic.  South Americans constituted less than one percent of all migrants passing through Darien Gap due to relative stability and alternative migration options in the region.  For instance, the vast majority of Venezuelans migrated within South America, including far-flung Chile.

Annual inflows of migrants through the Darién Gap, 2010-2020 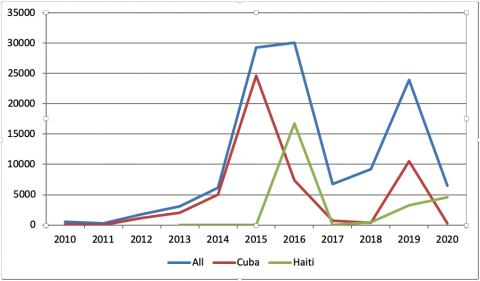 (Source: Author, based on data from Panamanian Migration Service) 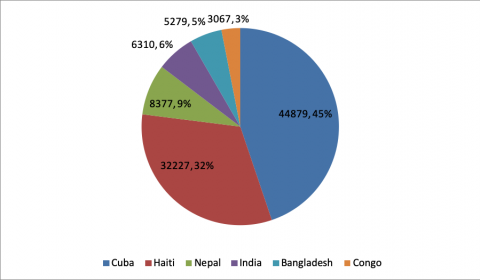 (Source: Author, based on data from Panamanian Migration Service)

Non-South American migrants braving the Darien Gap have been fleeing economic and political insecurity, sometimes to reunite with their US or Canada - based family members.  Asians were more likely to be driven by the former while Africans and Caribbean migrants by both. Based on SENAFONT records, over one third of all entrants have been women and a quarter has been minors, including unaccompanied minors. While all have been driven by economic factors, African and the Caribbean migrants fled long-lasting instability, hence they have been more likely to migrate with families. As migrants seeking long-lasting protection they have been more likely to avoid deportation along the route, but also more vulnerable. They had to come up with higher savings to pay for family migration. They had more to carry. They were more likely to proceed slowly or even get separated from the group.

Arguably, Asians and Africans have had alternative migration options closer to home.  However, for Cubans and Haitians it is the US that constituted the closest place of asylum.  Many benefited from US protection.  But over the recent years (and in the context of renewed US sanctions on Cuba) they had to seek US protection migrating via South and Central America.

Why don’t people bound for the US fly to Mexico or any of the Central American countries to avoid having to cross the Darien Gap and shorten their journey to the US?

Similarly to the EU, the US has been externalizing its border management to the countries increasingly further away from the US.  This policy has taken both formal and informal forms. In 2019, the US administration cajoled El Salvador, Guatemala, Honduras and Mexico to limit migration to the US via more comprehensive border and internal monitoring, including sharing of information with US migration authorities.  Partially in response to the US pressure, partially to protect its own labor market and security, also Panama implemented a tighter migration controls.  However, in a humanitarian gesture, it would allow passport carrying migrants with clear security background transit through its territory as long as these migrants arrived through the Darien Gap.

Remaining more autonomous from the US immigration policy than Central American countries and Mexico, South American countries offered extra-continental migrants a distant, but reasonable crashing pad for US-bound migration. In the worst scenario South American countries would allow migrants to transit their territory in a specified period. In the best scenario they would allow migrants to stay, work and even access social protection services. For instance, many Haitians benefited from Brazil’s extensive demand for cheap labor prior to the 2016 Summer Olympics and left Haiti that was still recovering from the 2010 earthquake and lingering social and economic instability. Even if a stay in South America was to be short, it allowed migrants aiming to reach the US to accumulate some savings needed to go north.

How does Panama manage migration through the Darien Gap?

Panama’s so-called “controlled flow” system has been set up with the help of US authorities and has been largely viewed as beneficial for the two countries. It provides the US with an early warning information of who heads towards its borders and does not oblige Panama to either receive or deport the migrants.

Sympathizing with those who have crossed the Darien Gap, Panamanian migration authorities facilitate transit of north-bound migrants through its territory as long as migrants have valid passports, clear security and biometric checks, as well as take four communicable diseases (but not yet COVID-19) immunizations.

Deemed to be transit migrants, those who have crossed into Panama are expected to stay in one of the three reception villages in the Darien region while awaiting government-organized transportation to Costa Rican border.  During the wait Panamanian migration authorities and more recently UN-family organizations have provided migrants with basic food and medical care, some of which has been supported by the US Department of State (IOM, 2020).  Given the time it takes to screen each migrant, only 100 individuals are transported to Costa Rican border a day.  Prior to COVID, migrants would typically spend about a week in Panama (UN, 2020).  COVID-related border closures have extended the wait time to over a month, much longer in the case of those coming from the countries characterized by a higher organized crime or terrorism activity, such as Yemen or Iraq.

How has COVID-19 affected migration through the Darien Gap?

COVID-related border closures decreased migration through the Darien Gap because of unprecedented restrictions on travel around the world. However, since many Haitians and Cubans had been already living in South America prior to border closures, they were able to make their way into Panama.

Since Panama could no longer transit 100 migrants a day, the three of the country’s reception centers began to run short of human and physical resources.  The accumulation of migrants in the small reception towns, themselves suffering from limited food and potable water resources, fueled migrants’ anxiety already prior to border closures.

The anxiety associated with the inability to travel, led several Haitians to set camp supplies on fire (Rodríguez, 2020).  The perpetrators were Haitians who left Haiti for Brazil in the aftermath of the 2010 earthquake and feared that the border closures would frustrate their decade-long effort to eventually reach the US.  Careful not to fuel xenophobia, Panamanian authorities did not openly blame the migrants, but at the same time agreed with the government of Haiti to establish voluntary return flights (Panamá Migración, 2019).

What could the US and the transit countries do to better manage migration to the US via Central and South America?

While less fatal than the Mediterranean Sea, the Darien Gap is a very dangerous section of a U.S.-bound migration route. Whether more migrants will have to come this way in order to seek protection or work in the US depends on how the new US administration will shape its domestic and international migration policy.

If the numbers of migrants crossing into Panama will continue to increase, the transit countries, international organizations and civil society will need to strengthen migrant reception infrastructure in order to prevent migrants and the host communities from competing for scarce resources. This collaboration has proven successful for Venezuelans across the region and to some degree the Darien Gap crossers in Panama.  Priority should be given to temporary housing as well as medical care, including measures to prevent the spread of communicable diseases such as COVID-19.

While not ideal, Panama’s managed migration flow policy offers some useful insights for the rest of Central America, where migrants have been robbed, assaulted and largely left to fend for themselves. It is fair that if US wishes to better control US-bound migration flows, it should help Latin American countries create adequate migration policies including infrastructure to receive them. Panama has been effective in transiting migrants through its territory but less forthcoming in encouraging them to apply for asylum in Panama itself.

It is thus also fair that Latin American countries offer migrants’ refugee status and that those seeking asylum also consider protection by Latin American countries. With the exception of El Salvador, Guatemala and Honduras, many Latin American countries do offer adequate conditions to seek asylum. However, weak economies and underdeveloped migration regulations make migrants prefer to go to the US. Facing an inevitable growth of migration from among those who will not be admitted to the US, Mexico should benefit from most comprehensive support in developing efficient migrant and asylum policies, employment opportunities for migrants and local populations alike and combating crime.

Last but not least, in order to address the root causes of extra-continental migration to the US via Central America, the US should review its cooperation with Cuba and Haiti, the two countries where 3/4ths of Darien Gap crossers have been coming from.

Read the recap of the event "Crossing the Darien Gap with U.S.-bound Migrants," with journalists Nadja Drost and Bruno Federico, hosted by Piotr Plewa.