New Monetary Policy Frameworks in a Time of Pandemic

“Just imagine for a second a pandemic. We are not leaving our room. We are effectively stuck on that cruise ship. That would be a massive shock.”

Tom Barkin made this comment in passing, last February at Duke, about the Coronavirus crisis, at that time still confined to China. Barkin is the president of the Federal Reserve of Richmond, and his comment on the COVID-19 threat was just one example of the list of potential shocks hovering over the financial stability of the U.S. economic system. How would our monetary institutions react to a set of ever-expanding, novel headwinds? Are Central Banks’ traditional tools still effective in a world of decreasing global demand? And above all, is monetary policy in and of itself the right “game in town,” when it comes to creating the conditions for the economic system to work at its full potential, and to provide relief during a downturn?

Little did anyone know that in just a few weeks Barkin’s prophetic words would turn into a grim reality.

This panel was an attempt to address the fundamental questions that monetary and policy experts have been debating since the 2008 global financial crisis (GFC). In his introductory remarks, Giovanni Zanalda explained that one of the main goals of the event was to discuss some recent proposals in terms of new macro policy frameworks, including close coordination between monetary and fiscal policies to respond to future economic downturns.

As Sarah Raskin put it: “Even if the Fed succeeded in meeting the dual mandate goals (“a big if”)—even that success wouldn’t produce the kind of economy we think is ideal. We can have—for example—a lot of people working, but those people aren’t necessarily earning enough to pay for their cost of living.” The economic landscape, in other words, has shifted in a way that makes many of the old monetary tools inadequate to face the current challenges.

To respond to such an unusual landscape, the Fed has been in the process of reviewing its monetary policy framework for over a year, trying to figure out how to update its constitutional mandate of price stability and maximum employment. The 2%-inflation goal set by the Fed since 2012 has hardly ever been achieved and, what’s more, interest rates have been kept at a level so low that is anyone’s guess, “how will we be able to face the next downturn?” president Barkin wondered.

As it happened, reality provided a bleak answer to Barkin’s question, just a few weeks after the conference. As Jerome Powell announced that the Fed would drop interest rates to zero on March 15—the World Health Organization had declared by then the COVID-19 crisis a pandemic—the financial markets’ reaction was totally unfazed, registering the worst drop since the coronavirus outbreak.

Such a divergence between the investors’ forecasts and Fed’s interventions was a reminder of the issues affecting monetary policy right now. “Will the old playbook,” asked Sarah Raskin, “do the trick in dealing with these challenges?” Even though the U.S. avoided recessions in the last 10 years, we are seeing new and old warning signs for financial instability. “Global demand is weakening,” Raskin added, “business investment has been down for over a decade, wages are virtually flat, and consumer demand has been burdened by household debt.” Climate change, to add a new challenge, is “one of the largest headwinds to economic growth,” said Raskin. “Anything that risks triggering a recession or depression undermines the Fed mandate.”

So how will the Fed and other central banks respond to these challenges?

The Federal Reserve is in the process of reviewing its framework, as is the European Central Bank. As part of this review, the Fed has created a program called “Fed Listens,” a series of listening sessions around the Country at the various reserve banks. In these sessions, the Fed wants to understand the experience of real America in today’s economy.

“Fed Listens” is an opportunity for policymakers to hear what results are needed by the people to whom they are listening. But a bigger issue might still be unanswered. Both the Fed and the ECB made it clear it is not their mandates that are in question but only how to fulfill them. (As mentioned above, the Fed’s dual mandate is price stability and maximum employment. ECB on the other hand has an individual mandate—price stability.) The bigger issue—brought up again by Raskin—is that with an inflation target hardly met by both central banks, “shouldn’t monetary institutions start thinking about non-inflationary strategies, “as part of the new framework? 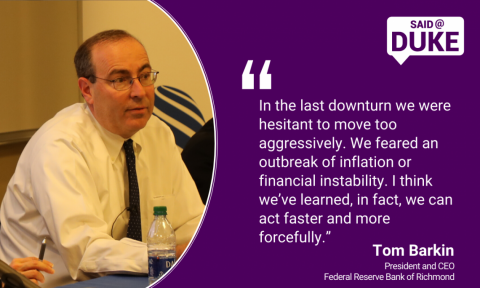 Tom Barkin, although well aware of the issues at stake, thinks that unconventional tools like Forward Guidance and Quantitative Easing (QE) are still potentially effective. (The Fed also announced $700 billion of QE purchases on March 15, followed by a second announcement of a willingness to proceed to unlimited purchases just a week later.) He reminded the audience of the “whatever it takes” announcement of the ECB’s former president, Mario Draghi, as something he considers “one of the most successful recent international innovations” in monetary policy.

And still indirectly replying to Sarah Bloom’s question about the need of a new monetary framework, former director-general of statistics at the European Central Bank, Aurel Schubert, pointed out that the Bank’s mandate is sanctioned by the European Union’s basic treaties, and any change in the treaties is very unlikely to happen (it would be “like opening Pandora’s box,” Schubert said). All he thinks the ECB can change is the way it communicates its goals and avoid being only focused on inflation. The European Central Bank needs, like the Fed, “to get closer to the people and to be more accountable than in the past.” But mostly important is for the ECB to manage expectations. Schubert, like Barkin, thinks that the central bank is not the only game in town, and “it can’t do everything.” “My take after 35 years in central banking,” Schubert concluded, “is that there won’t be a revolution but only an evolution, and lot of it will be at the margins.”

If this is true, we won’t be able to see any radical change of strategy for the central banks in the near future. Slow changes, new tools are always on the agenda. But the major issue is that central banks cannot be considered—again— the only game in town. We might be missing the point if we think that monetary policy can bring about the scope of reform needed for the economic systems to be able to fulfill their desired goals of shared prosperity and growth. These goals—for the most part—can hardly be achieved through the tools of the central banks, tools created to influence the monetary markets.

These are the goals of fiscal policy, the other main game in town.

The very last question asked at the conference by a member of the public was about the feasibility of other unconventional tools, like helicopter money, that is to give money directly to households and enterprises, without going through the financial markets. Would central banks have the legal authority to do that? To this question, Aurel Schubert’s reply was very short: “It’s fiscal policy. It’s not a question for the central banks.”

“The call for a closer coordination between monetary and fiscal policies,” commented Giovanni Zanalda, several weeks after the panel, and the implementation of unprecedented measures has become louder in the US, Europe, and Asian economies affected by the global Covid-19 crisis. The situation is so dramatic that governments and central banks are throwing all darts including unconventional measures such as ‘helicopter money’ or postponing tax and mortgages payments in order to mitigate the economic - and social - impact countries are experiencing across the world.”  And all of this, he remarks, “has been unfolding over the course of only a couple of weeks!” 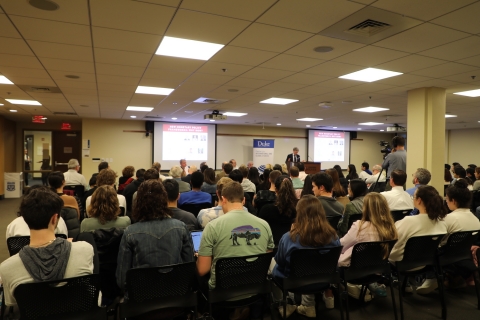 Close to one hundred students participated in the event. “Several students mentioned that they found the event very accessible and a great complement to what they have been studying in their econ courses,” says Giovanni Zanalda. Qiufeng Zhang, a senior in economics, wrote that “given all the challenges faced by the Fed and the ECB, a new framework of monetary and fiscal policies is needed. I am looking forward to witnessing what this new framework will look like.” For another senior, Amy Xiong, listen to the panel made her very “interested in watching the Fed and ECB’s future actions to shape their monetary policy frameworks.” And for senior Justin Chae, “Battling with oddly low inflation and interest rates, previous monetary and fiscal policies may no longer be appropriate in our current situations. (…) This panel discussion opened my eyes up to the range of strategies and perspectives used to pave our future.”

“Ironically, they did not have to wait for too long,” Zanalda added.

This event was organized by the Duke University Center for International and Global Studies and supported by the Global Financial Markets Center at Duke Law and the Duke Department of Economics.