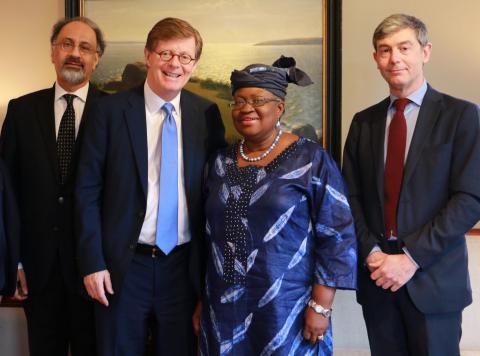 As part of their Rethinking Development seminar series, the Duke Center for International Development (DCID) and the Duke University Center for International and Global Studies (DUCIGS) welcomed Dr. Ngozi Okonjo-Iweala to Duke University on Thursday, February 15. Dr. Ngozi Okonjo-Iweala served two terms as Nigeria’s Finance minister and a short period as its Foreign Minister.  She also spent more than two decades at the World Bank, eventually rising to the Number 2 position of managing director. She is currently the Chair of the board of the Global Vaccine Alliance and Immunization program (GAVI).  Over the past four years she has been ranked by Fortune as one of the 50 Greatest World Leaders, by Forbes as one of the Top 100 Most Powerful Women in the World, and by Time Magazine as one of the Top 100 Most Influential People in the World in 2014.

After a meeting with faculty from the Sanford School of Public Policy, the Duke Africa Initiative, and Duke Global Health Institute, Dr. Okonjo-Iweala joined an energetic group of students for a special lunchtime discussion. Two Master of International Development (MIDP) fellows from Nigeria, Ada Umenwaliri and Bimpe Femi-Oyewo, helped lead the meeting with undergraduate and graduate students — most from African countries. She particularly enjoyed this meeting since throughout her career she has focused on ensuring that young people are engaged and able to reap the benefits of economic growth. 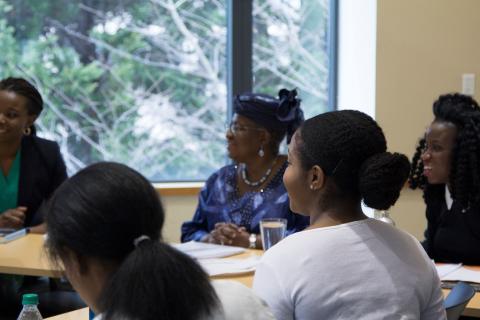 The Center for Policy Impact in Global Health (CPIGH) hosted her final meeting of the day before the public talk. As the board chair for the Gavi Alliance, Dr. Okonjo-Iweala was keen to discuss their work and the intersections of finance, development, and health.  Yamey, who directs CPIGH said, "Ngozi is a true giant in global health, an inspirational leader that many of us look up to.  I was delighted to brief her on the work of the Center for Policy Impact in Global Health. Our work has a lot of relevance to Gavi’s mission, since we are exploring topics such as the financing of global public goods for health and reaching the poor in middle-income countries that have transitioned from development assistance for health.”

Attendees for the public event that evening came from all across campus and the Triangle, including guests from UNC and regional African community groups.

Her talk, “Rethinking Development: Sustaining Africa’s Rise,” to a standing room only crowd at Perkins centered on a key theme: Africa has a great potential in terms of  future growth and development but it requires large investments in  sustainable energy, infrastructure,health and education and the implementation of policies that promote gender- and age-inclusive economic development. Her perspective from both government and nongovernmental positions enabled her to reflect on the nuanced challenges facing the continent, but also the hope and progress.

She opened her talk by acknowledging that Duke is “in the business of answering the most pressing, difficult questions.” At the end, she reflected on her day meeting with students and faculty working on development and global health. “I know there’s energy here,” she said, “I am at the right place at the right time.” 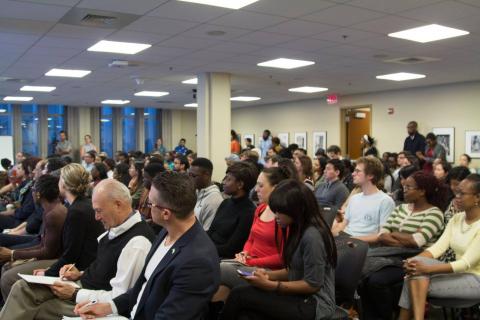 Dr. Michael Merson, Vice President and Vice Provost for global affairs, introduced her talk and moderated the discussion. In his closing remarks, he mirrored the admiration of the crowd: “You are a great inspiration to old and young students. All have been inspired by your bravery and commitment to the African continent. “

Read the article about her talk at Duke University.