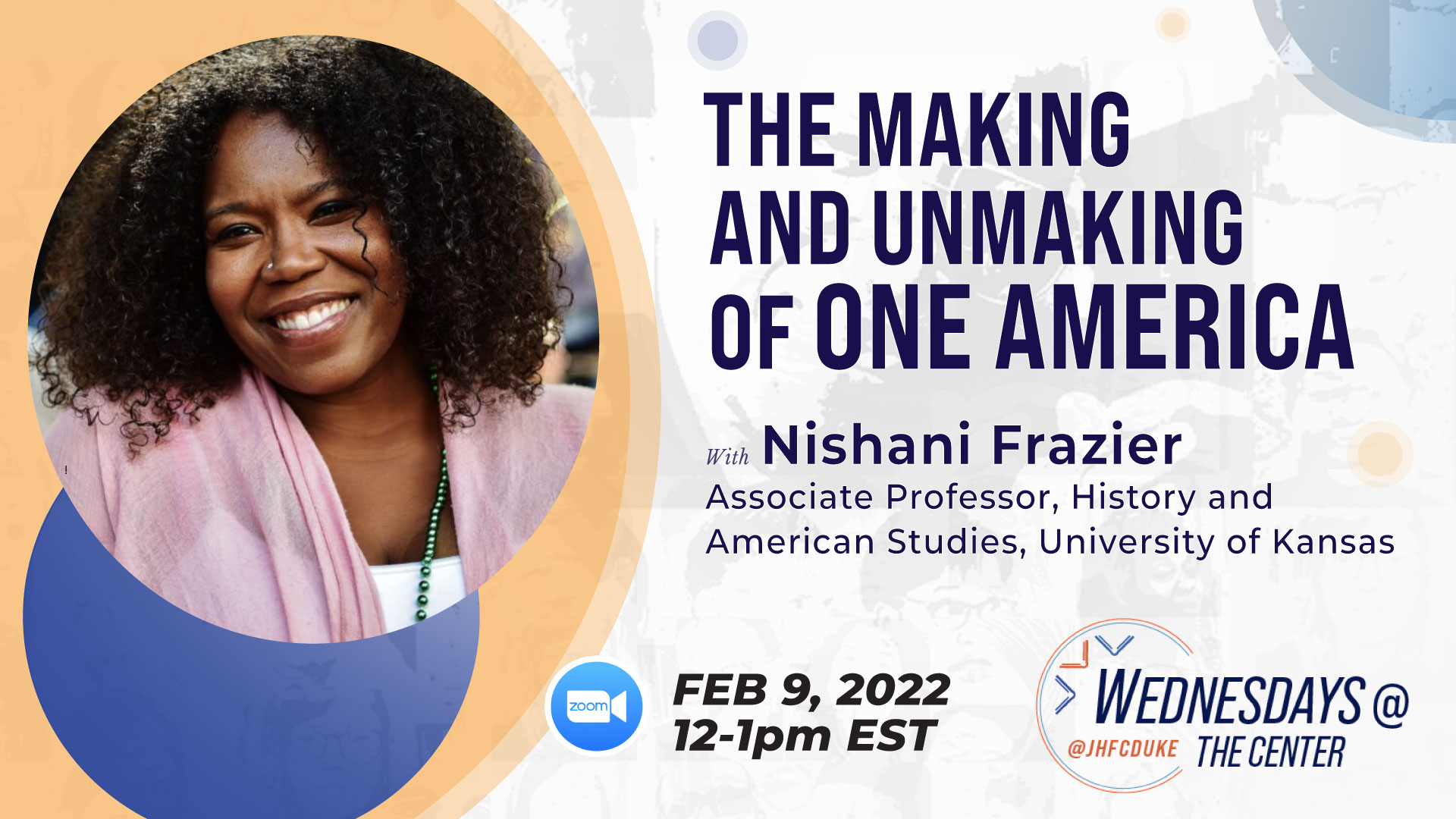 In a virtual Wednesdays at the Center presentation, Dr. Nishani Frazier, Associate Professor of American Studies and History at University of Kansas, discussed Bill Cinton’s President's Initiative on Race and the social and political circumstances that gave rise to its creation.

Established in 1997 by then-President Bill Clinton, the President’s Initiative on Race, formally entitled One America, was an advisory board that focused on fostering discussions on racial issues and improving race relations in the United States. John Hope Franklin, whom Dr. Frazier worked for during his tenure at One America, served as the board’s chairman.

In her lecture, Dr. Frazier argued that One America was created not to earnestly address race relations in the country, but to “tap down the Black radicalism and mobilization” that was occurring in the late 1980s and early 1990s in response to police violence and Reagan-era conservative policies.

“The Reagan and Bush years were not kind to Black Americans,” Frazier said, “Both presidents used white racial fears to promote themselves and propagate their policies, to justify conservative positions of anti-big government, the belief against excessive taxation, and the assertion that welfare was really socialism run amok.” Additionally, Dr. Frazier pointed to the attack on Rodney King, anti-apartheid sentiments, the presidential run of Jesse Jackson, and the 1995 Million Man March as examples of the social and political climate for Black Americans during Clinton's presidential campaign and early presidency.

Dr. Frazier argued that the crescendo of this dynamic occurred in 1995 with the not guilty verdict in the OJ Simpson murder trial, which captured the attention of the nation and largely split the country along racial lines. “Whites who believe Simpson avoided justice exploded in anger and African Americans rejoiced in glee, believing and asserting that the justice system had finally worked,” Frazier said.

It was at this moment that President Clinton could no longer ignore racial issues in the country. Only months later, during the State of the Union address, he announced the creation of One America, which he “constructed as a dialogue which would allow Americans to grapple with the country’s history of racial discrimination and oppression.”

Speaking from her experience working under John Hope Franklin during his tenure as chairman of One America, Dr. Frazier recalled that the board was ill-organized and took a Republican-style stance of "individual, personal interaction and engagement" to address racism and inequality, not government interventions.

While Dr. Frazier referred to herself as a "cynic" of President Clinton's intentions and capabilities in addressing racial inequality through dialogue, she said, "I did believe in the man he chose to chair the advisory board--I believed in John Hope Franklin."

This event was sponsored by the Duke University Center for International and Global Studies and the John Hope Franklin Center.