Most aspiring scholars begin PhD programs intending to remain in academia, either as research professors or instructors. Increasing numbers of these graduate students, however, are looking for ways to apply their advanced skills to policy debates and questions beyond the ivory tower. Few institutes of higher education dedicate resources to mentor those seeking these alternate paths. On Wednesday, November 6, Andrew Stein illustrated a path to help such students bridge the gap between their career aspirations and their graduate studies. The event was part of the Wednesdays at the Center speaker series. 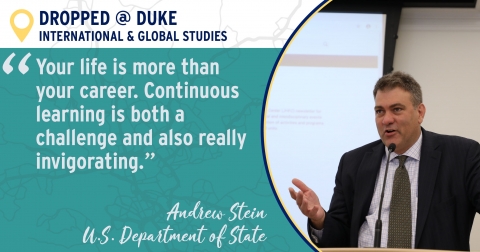 Stein is a career civil servant currently working as a senior analyst on Latin America for the U.S. Department of State’s Office of Opinion Research in the Bureau of Intelligence and Research. As Ambassador Patrick Duddy noted in his introduction, policymakers depend on knowledgeable individuals such as Stein when weighing strategic policy choices. The Office of Opinion Research itself grew out of the Office of Strategic Services Research Department, making it the oldest civilian intelligence bureau in the U.S. government. Stein traced through the history of the INR, noting that the general U.S. knowledge of other countries was very limited at the time of its entry into WWII. The goal was to build a core of information and deep knowledge of other countries' histories and languages. Today, Stein and his colleagues work to synthesize useful knowledge about all countries around the world and provide useful information for the Secretary of State and other policymakers.

The research and analytical skills that graduate students naturally acquire over the course of their studies are precisely the training that enable them to perform the value-added independent assessment of countries and regions that inform and support the policy and intelligence purposes of the U.S. and other governments. Stein noted that his academic training enables him to tackle thorny issues with an interdisciplinary approach while being open to learning from multiple individuals with varying areas of expertise. "You have to be a good generalist. I bring all of my interdisciplinary training together to report on complex issues." A key difference, therefore, between academia and the policy sphere is that "academics prize hyper-specialization; in the policy world, you have to learn everything."

Stein left his audience with several pieces of practical advice born from his nearly 20-year career in a government bureaucracy. He suggested, "don't approach the job search on auto-pilot; consider other possibilities," encouraging graduate students to be open to alternative career paths. Regardless of their ultimate choice, Stein noted, "graduate students should be thinking about developing skills and competencies that distinguish them from others." He also wryly observed, "the world is a meritocracy mediated by who you know. Networking is very important." He emphasized, however, that networking is not about blindly reaching out to individuals with particular titles for personal gain. Instead, it is about making meaningful connections with people who can be resources at different points in your professional development and for whom you can be an asset in turn.

For Stein, the most rewarding part of applying his skills in the policy arena is that "what I do, I can see that it has an impact." Over the course of his career, his particular blend of language and research skills has enabled him to oversee dozens of strategically important survey projects in different countries around the Latin American region. Stein received his Ph.D. in Political Science from University of Pittsburgh, earned Master’s degrees from New York University in Latin American Studies and the University of Pittsburgh in Political Science, and completed his Bachelor’s degree in International Studies at Kenyon College.